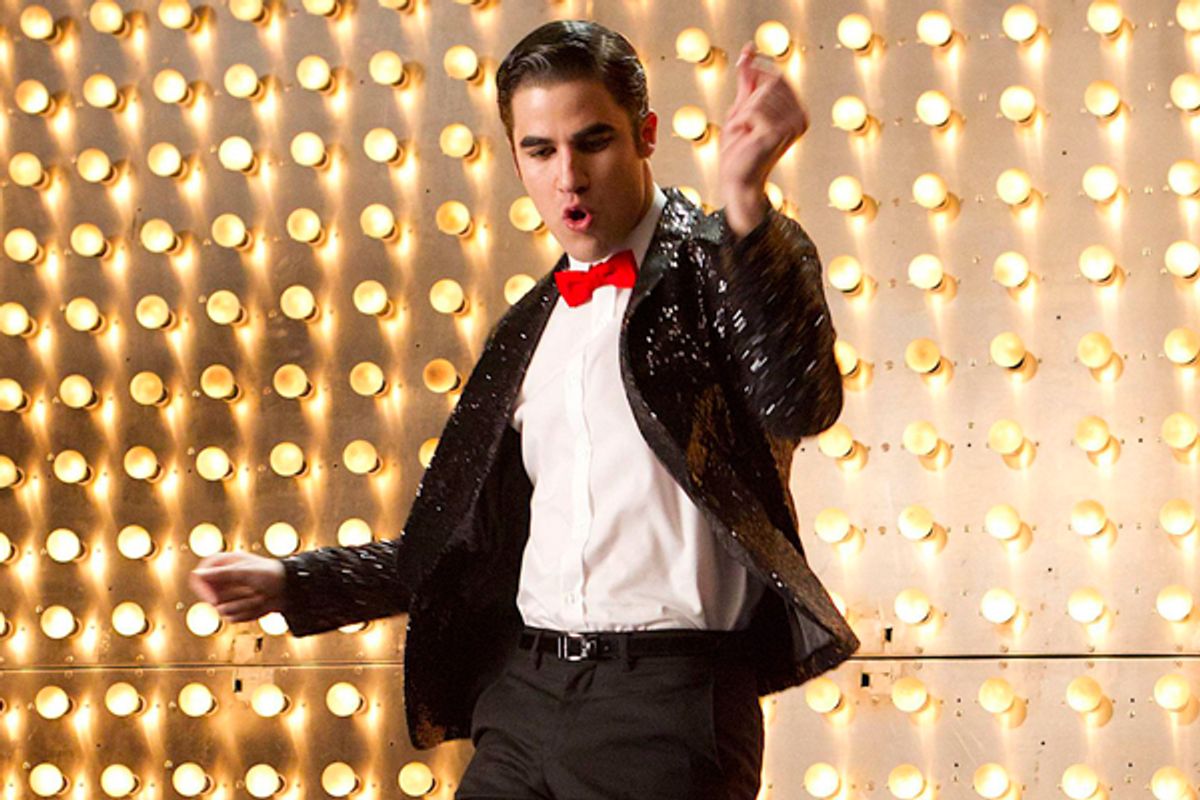 "Glee" managed to squeeze nine Michael Jackson songs into last night's tribute to the King of Pop. But each of them seemed timid -- a cast that loves to put their own over-the-top stamp on songs presented everything very carefully. The expected songs felt largely rote and by-the-numbers, tied in many instances to the original choreography and sometimes frame-by-frame replications of his old videos. It's as if they didn't dare anger the Jackson estate in any way.

You got the feeling the whole thing was built around a product endorsement, in this case “Michael Jackson: The Immortal World Tour,” which was mentioned twice and just happens to open in the U.S. right around the time next week’s “Glee” rolls around.

Part of the problem was the lily-white cast. This might be central Ohio, but can we believe there are no African-American males at William McKinley High School? Even when the singing group from the competing private school is on-screen, the only black male face is in the background.

New Directions has the big voice of Amber Riley, the only African-American with a speaking role until NeNe Leakes was recently added to the cast as the swim coach. But even Riley’s big voice seemed underused on a duet with Chord Overstreet on “Human Nature.” Leave it to Naya Rivera to bring the most soul to the proceedings, but her duel with Grant Gustin on “Smooth Criminal” seemed oddly staged (though it was backed by dual cellos, in the episode’s one notable arrangement).

When it comes to Jackson, apparently all anyone remembers are the dancing duels, so there was another one in a parking lot to “Bad” against the Warblers.

Either way, it’s a cheap way to impress drama on a pop song, just as it was in the original “Bad” video. (They’re going to dance their way out of this? Sure they are.)

And who said “Glee” was a drama anyway? Although all the minor crises of high school are explored over and over (to the sound of that annoying bell at the start of every scene), the show presents itself as a comedy, though there was just about one joke this week, when Mark Salling’s brooding Puck told Darren Criss’ character, Blaine, that he was a turncoat. “You’re a modern day Eggs Benedict,” he said, though he swallowed the line in such a way that most probably never heard him.

It was the kind of malapropism that was a natural for Heather Morris’ delightfully dim Brittany, but she hasn’t had anything much funny to say this season. And despite winning Emmys for her role as the ruthless cheerleading coach Sue Sylvester, Jane Lynch hasn’t had anything interesting to do on the show for more than a season (and this was another one of those episodes that she wholly sits out).

The one kid who relates best to Jacko, it turns out, is the nerdy one, played by Kevin McHale (or at least he puts on the impression that he does, since he emits Michael’s trademark “whoo!” at various points in the show).

He also turns out the most heartfelt speech of the show, which amazingly turns the whole “It gets better” public service campaign on its head. When Blaine gets hit with yet another Slushee (the weapon of choice in Lima, Ohio) and is actually injured, McHale’s Artie suddenly blurts to Michael Morrison’s increasingly ineffectual teacher, Will Schuester, “Don’t give me any of that ‘It gets better’ crap because I’m not interested in it getting any better. I want it to be better!”

The eruption is immediately followed by Artie ditching his wheelchair for only the second time in show history in order to join Harry Shum Jr.’s Mike Chang on an excruciatingly exact replication of Jackson’s worst video – the tuneless, black-and-white “Scream” he did with sister Janet Jackson.

When it comes to picking up exact video images, though, the highlight must have been the morphing scene of character face into character face during the climactic “Black or White.” Except in this case, of course, it was much more “White or White.”