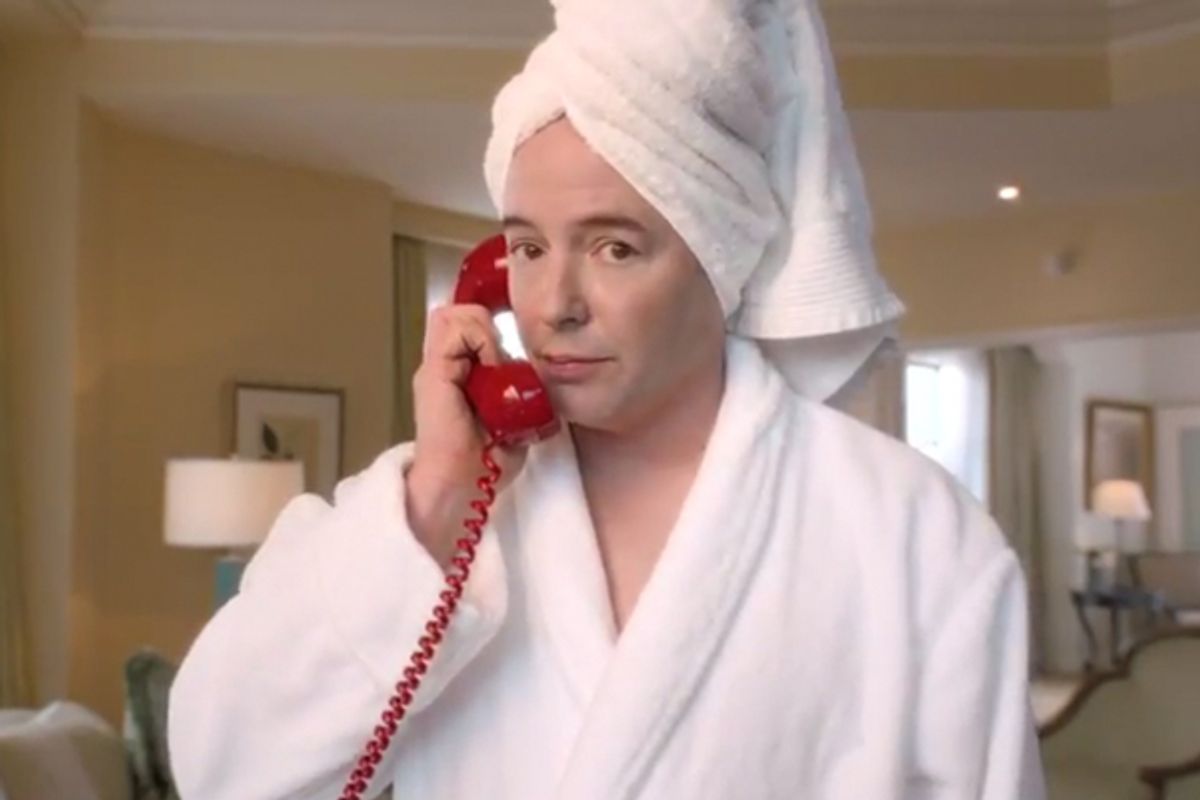 Thanks to him, the Japanese carmaker can boast that it's got this year’s most buzzed-about Super Bowl ad: a commercial for the Honda CR-V featuring Broderick in an homage to his most well-loved character, Ferris Bueller.

This time around, Broderick isn’t portraying a charming teenage truant who feigns sickness and skips school to drive around Chicago in a Ferrari 250 GT with his best friend and girlfriend, and dance on a parade float while lip syncing Wayne Newton and the Beatles. Rather, Broderick plays a fictionalized version of his actual, off-screen self: a middle-aged guy feigning sickness to take a day off from shooting a movie so that he can tool around Los Angeles in an SUV. The ad, which was directed by Todd Phillips — of “The Hangover” and “Old School” fame -- has been viewed over 3 million times on YouTube, is a top trending topic on Twitter -- but has divided fans who aren't sure whether to thrill to the nostalgia or be horrified that the free-spirited Bueller is shilling for an SUV.

The spot is, of course, chock-full of references to John Hughes’ 1986 teen comedy "Ferris Bueller’s Day Off," with plenty of cinematic nods meant to delight the “righteous dude” in all of us. Whereas Ferris had to con Principal Rooney, Broderick’s agent is now the authority figure who must be duped in order for the day off to succeed. Ferris boogied on a float in a German parade; Broderick sings a Mandarin ditty while dancing in a Chinese parade. Best of all, perhaps, is the moment when a valet alerts Broderick that his Honda is ready with a monotonous “Broderick … Broderick …,” instantly calling to mind the line that made Ben Stein famous.

(True aficionados will thrill to the more obscure references: a guy in a Detroit Red Wings jersey, a la Ferris’ best friend Cameron, rides the roller coaster behind Broderick; the area code of the phone number Broderick calls using the CR-V’s phone system is that of the Chicago land area where Ferris had his fun; Broderick’s agent is named Walter Linder — which just happens to be the name written right above that of Abe Froman, the Sausage King of Chicago, in the reservation book at the snooty restaurant where Ferris, Cameron and Sloane have lunch. Really.)

So how did one of the most beloved pop-cultural moments of the 1980s become the subject of a Honda commercial, 25 years later? “The film embodies the theme of getting out and doing stuff,” Joe Baratelli of RPA, the agency behind the spot, told Adweek’s David Griner. The Honda CR-V is trying to position itself as a car that allows you to tackle, as Baratelli put it, the “list of things you want to do before the things you have to do,” which jives with the carpe diem worldview that Ferris espouses.

As for Broderick’s involvement, he thought about it for a while, ultimately deciding doing the ad “might be amusing,” as he told New York. “Todd Phillips was directing it, who’s a good director, and I thought it would be fun to send up Ferris Bueller a little bit.” Over the course of the shoot, Broderick said, he was “running around L.A … thinking, ‘I hope this is a good idea.'”

Some would say it isn’t.

While some people are griping about the lack of Alan Ruck and Mia Sara in the spot, and others are pointing out the obvious — a Honda ain’t a Ferrari — still others have qualms on a deeper level. “Remember when it was thought that a corporation couldn’t successfully manufacture a viral sensation?” asked the CBC’s Jian Ghomeshi on his program “Q.” “Remember how those discerning and democratic voices of the Internet would see through that kind of ruse? No more. Now it seems like we’re all just suckers for … an epic SUV commercial that plays on our nostalgia for a time gone by. What do we do in the face of these programmed and planned viral creations that are actually about selling products? We eat them up. But maybe it’s worth asking ourselves, what would the real Ferris Bueller do?”

Cleverly, the commercial sidesteps that sacrilege. That’s not Ferris Bueller in the SUV, it’s Matthew Broderick. Ferris Bueller remains ageless, and this ad is yet another testament to that. He lives on Blu-ray, while Matthew Broderick — though still adorable —  grows up, marries, has kids and goes gray at the temples. A better question — and one that many fans are surely asking themselves — is, what would John Hughes (who died in 2009) have thought of the commercial?

Maybe Hughes would have been annoyed that his beloved Ferris was being used to sell cars on TV. (He was quite peeved by the NBC 1990 sitcom version of “Ferris Bueller,” now only remembered because Jennifer Aniston played Jeannie.) On the other hand, he did live to see JC Penney’s 2008 back to school campaign, which distilled the essence of "The Breakfast Club" into a 60-second ad.

But in the movie, Ferris’ father, played by the wonderful actor Lyman Ward, worked in advertising in Chicago. And so too did Ferris’ true father, John Hughes. Indeed, before his extraordinarily successful career as a filmmaker, Hughes was something of an ad-world wunderkind. At just 21, he convinced execs at the ad agency Needham, Harper and Steers to hire him, and he later made the jump to Leo Burnett and Co., where he began working on accounts such as Edge shaving cream. (The well-known ad where a man scratches a credit card along his face to prove there’s no stubble? A Hughes brainchild.) He learned the art of using marketing as a means of telling -- or more accurately, selling -- a story. He attended monthly focus groups to discover what people wanted to get out of a product, an experience he would later say made him savvy when it came to the marketing of his own films.

Considering his understanding of the power of advertising, and his love of well-crafted humor (which the Honda ad, admittedly, contains plenty of), he probably would have gotten a kick out of the Super Bowl spot. It’s fair to say that, at the least, he would have loved the use of a vanity license plate (“SOCHOIC,” for Ferris’s oft-imitated line “so choice”) in the spot — a Hughes hallmark if ever there was one.

Hughes, one would like to believe, would have found it quite righteous indeed that his movie was still so beloved — 25 years after its release — that it was worthy of a lengthy homage in front of the biggest television audience of the year (and possibly of all time).

When Honda first released a short teaser of the commercial, many fans believed that what they were seeing was actually footage from an upcoming Ferris Bueller sequel. And they’re not the only ones to fantasize about such a thing: “Just for fun,” Alan Ruck told me when I interviewed him for my book about John Hughes’ films, “I used to think, why don’t they wait until Matthew and I are in our 70s, and do 'Ferris Bueller Returns,' and have Cameron be in a nursing home,” which Ferris would liberate him from.

Kidding aside, Broderick has said that there was “some talk” about a sequel, but that “John never really seemed absolutely thrilled about it.” Broderick didn’t want to say yes to the role until he saw a script, and Hughes, Broderick remembered, “said, ‘Well, I’m not gonna write a script if Ferris Bueller’s not saying yes.’ I look back on that and I think, of course I should have just said yes. That was just really ridiculous of me.”

At the end of the commercial, after chasing down the kinds of life-affirming adventures that would surely make Ferris proud, Broderick turns to the camera and speaks his most iconic character’s most iconic line: “I’ve said it before, and I’ll say it again: Life moves pretty fast. If you don’t stop and look around once in a while, you could miss it.” It doesn’t matter if hearing Broderick utter the line in this context has your eyes rolling or misting up — the wisdom of Ferris’ philosophy still rings true. Life does move pretty fast — whether you’re young or middle-aged; whether you’re doing the things you want to do or the things you have to do; whether you’re driving a Honda or a Ferrari.