Only the Old Confederacy can save Newt now

He was slaughtered in Florida -- but not everywhere in Florida 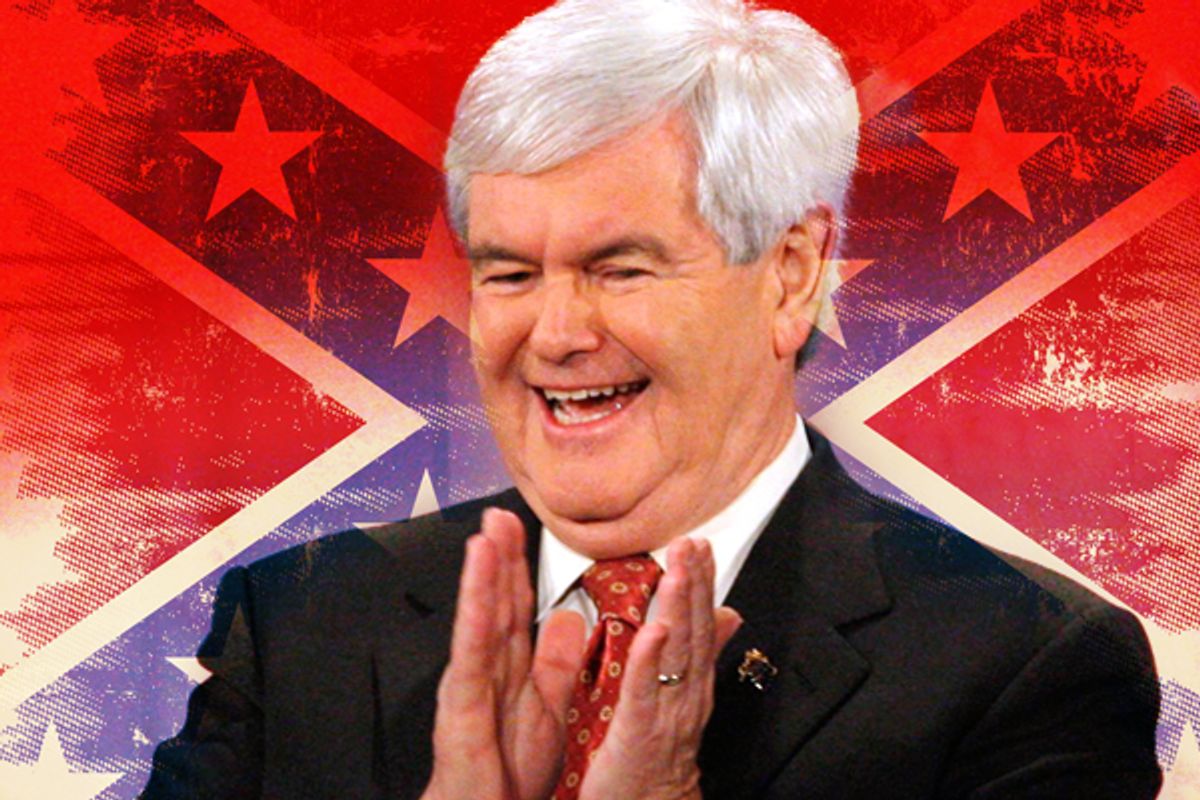 There are plenty of possible explanations that have nothing to do with conventional strategy for why Newt Gingrich is so adamant that he’ll continue his campaign well into the future.

But if you’re looking for a rationale that’s grounded in political logic, just take a look at how the county-by-county vote broke down in Florida, courtesy of this handy map that the Huffington Post put together: The blue counties were won by Mitt Romney, while Gingrich carried the red ones. Gingrich’s strength, as you can see, was heavily concentrated in the northeast corner of the state and in the panhandle region. Given that he ran 14 points behind Romney statewide, it’s striking that Gingrich actually finished first in so many counties, and his margins in some of them were considerable; all told, he beat Romney by double-digits in 20 counties.

This underscores the profound cultural and demographic divide that defines Florida, and the significance for future contests in other states is obvious. As Ed Kilgore put it, “basically, the more a county resembled GA or AL, the more likely it was that Newt would win, and that, of course, will be part of his rationale for continuing on, at least to states where Crackro-Americans dominate.”

This is why, as much as Romney would like to behave as the presumptive GOP nominee now, Gingrich will still be treated as a relevant figure by the political world at least through early March. That’s when Georgia, Alabama and several other Old Confederacy states that are demographically similar to Gingrich’s Florida sweet spots – and to South Carolina, for that matter -- will vote.

A few other Florida findings bolster the notion that Romney still has something to prove in the South. Among evangelical voters, according to the exit polls, Gingrich eked out a 38 to 36 percent margin. In a way, this was a triumph for Romney, who got his clock cleaned among Christian conservatives in South Carolina, but the evangelical share of the Florida GOP electorate was just over 40 percent. It was nearly 70 percent in South Carolina, and figures to be around the same in the rest of the South.

Plus, voters who identified themselves as “very conservative” – a bloc that accounted for 33 percent of Florida’s voting universe – broke for Gingrich (!) by a 41-30 percent spread. Again, the “very conservative” share should be higher elsewhere in Dixie.

This should allow Gingrich to absorb a string of defeats in February; all but one of the states that will vote this month, as ABC’s the Note points out, went for Romney when he ran four years ago. And the exception, Arizona, comes with an asterisk, since it was John McCain’s home state – and even then, Romney still managed to hold the favorite son to a 14-point margin. (The state’s high LDS population probably played a role.) By contrast, Romney was held to 18 percent in Alabama, 24 percent in Tennessee and 30 percent in Georgia in ’08. He had a chance two weeks ago in South Carolina, where he nabbed just 15 percent four years ago, to show that he’d won over the Deep South, but that didn’t work out so well.

So now Gingrich can spend the next six weeks warning Southerners about the Massachusetts Mormon with a moderate – make that liberal – past. There's some irony in this. Gingrich started out in politics supporting Nelson Rockefeller over Barry Goldwater in 1964, while the modern Southern GOP largely grew out of Goldwater's victory in that race. But in this race, it's Romney who is most commonly associated with Rockefeller, and Gingrich who presents himself as a modern-day Goldwater.