Romney buys into the Big Lie on housing 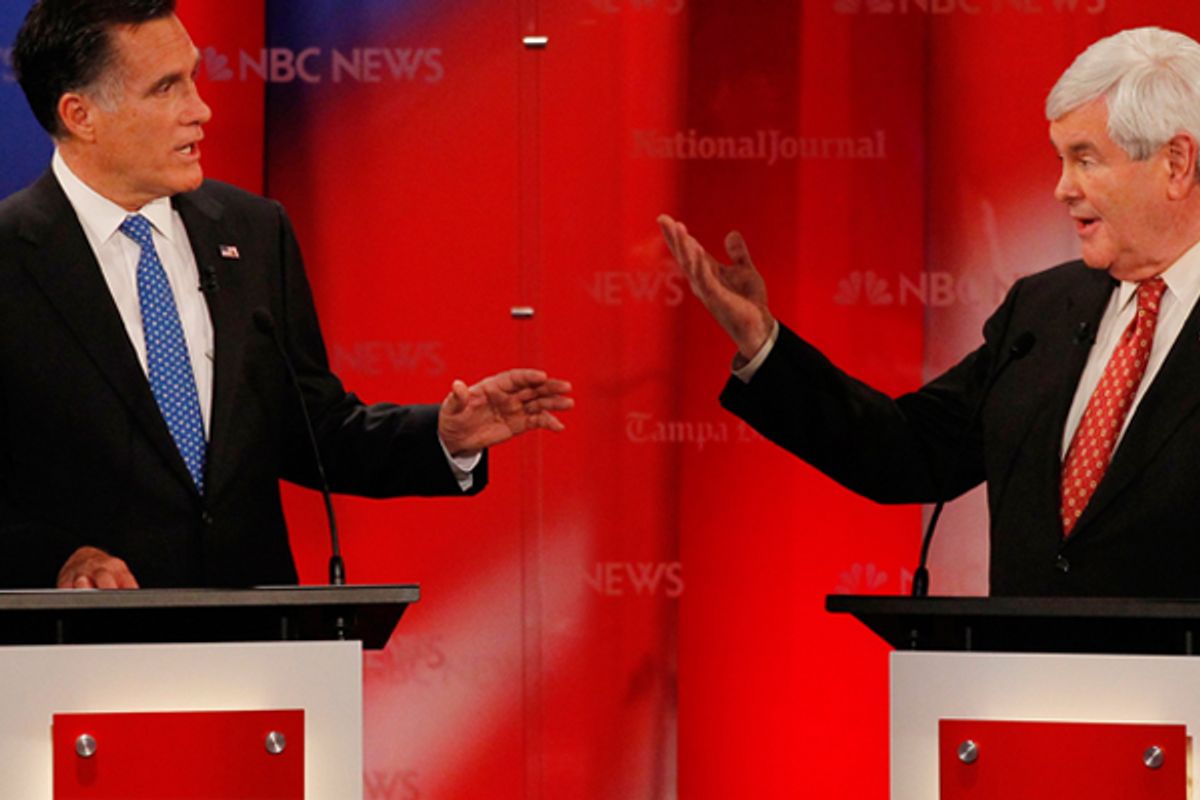 Now that Mitt Romney has won in Florida, it is time to ask if President Romney would rate as a Wall Street enabler. How capitulatory? How obsequious? How much worse than any president who has grinned his way to the White House since Ronald Reagan?

Since President Obama has hardly been God’s gift to the 99 percent when it comes to regulating the financial industry — just look at his dreary appointees, such as Wall Street favorite Tim Geithner as Treasury secretary — it’s purely a frying pan vs. fire situation. But let’s be clear that Wall Street regulation is one area where the old political expression “not a dime’s worth of difference” doesn’t apply. All the Republican candidates would be much worse than the incumbent. The  big question post-Florida is: How bad would the front-runner be?

The subject hasn’t come up very much in the debates, and Romney hasn’t volunteered much on his stance toward financial regulation, certainly not as much as Newt Gingrich, who gave a little-noticed speech pledging his fealty to Wall Street’s agenda, in detail, in 2006. We know that Romney opposes Dodd-Frank, as do all the other GOP candidates, so he’d roll back the only steps Congress has taken to heighten scrutiny of the financial industry. But that’s about it.

Still, he has offered up a significant clue in recent weeks. Just listen to his attacks on Newt Gingrich in South Carolina and Florida and you hear something chilling: a man who is either deceptive about the financial crisis of 2008, or is as deluded as a Tea Party fanatic about the origins of the crisis. That unsettling choice, combined with his record as a steely-eyed job-slasher at Bain Capital, means that he would most likely be a horror when it comes to preventing banks from treating the 99 percent like those little companies Bain used to squeeze.

I’m talking about Romney's attack on the former House speaker for his well-compensated “consulting” for Freddie Mac, the government-sponsored enterprise that bought up mortgages from the big banks and fed the monster of the financial crisis. There you find not just the business-as-usual hypocrisy that has become a feature of this dreary campaign, but an implicit endorsement of a factually incorrect, widely repudiated theory of the origins of the financial crisis.

It’s hard to calculate, but there’s little doubt that the Freddie Mac attacks contributed significantly to Romney's victory margin in Florida. His latest gimmick is a “reward” for Gingrich’s Freddie Mac contracts, which remain undisclosed. The point being not so much that Gingrich got paid a lot of money — something that Romney can hardly dispute — but that he was paid by a government-sponsored entity that, by his telling, is primarily responsible for the financial crisis. That’s the key. In his stump speeches in Florida he has said that Gingrich “made $1.6 million in his company, the very institution that helped stand behind the huge housing crisis here in Florida."

Here is how Romney spun that yarn at a debate on Nov. 9: “The reason we have the housing crises we have is that the federal government played too heavy a role in our markets,” he said to applause. “The federal government came in with Fannie Mae and Freddie Mac, and Barney Frank and Chris Dodd told banks they had to give loans to people who couldn’t afford to pay them back.”

I’ve heard that same line of malarkey a bunch of times, mainly from Tea Party people and Ayn Rand devotees: that the government, through the Community Reinvestment Act and Fannie Mae and Freddie Mac, was directly and primarily responsible for the financial crisis. Not out-of-control banks. Indeed, note his language. The banks were told to loan money to people who can’t afford it.

Embracing this mythology of the right, Romney has rewritten the history of the crisis as a fairy tale in which the banks were mere pawns in the service of the real villain: the government. It’s pure fiction. The contention that the CRA played a pivotal role has been refuted “up, down and sideways,” as Paul Krugman once put it.  For one thing, most subprime lending was made by institutions not subject to the CRA. Commercial real estate lending, “which was mainly lending to rich white developers (not you-know-who) is in much worse shape than subprime home lending,”  Krugman noted.

There’s little doubt that Fannie Mae and Freddie Mac contributed to the financial crisis. As Gretchen Morgenson has pointed out, they “amplified the housing boom by buying mortgages from lenders, allowing them to originate even more loans.” That was their job, to encourage home ownership. But as the Financial Crisis Inquiry Commission pointed out in its final report, “they were not a primary cause.” They participated in the risky subprime and Alt-A loans that were made by the banks only after they were made. The real abusers of the housing bubble were the mortgage lenders who dreamed up the super-complicated loans that they foisted on people who couldn’t afford them, and the Wall Street banks that packaged them into financial weapons of mass destruction.

Those “toxic waste” mortgage-backed derivatives ultimately exploded in the portfolios of American International Group, Merrill Lynch and other financial institutions. Poor judgment, greed, ridiculous compensation: All had nothing to do with Fannie and Freddie.  Yet you never see them mentioned by the right, or by Romney.

As with the Community Reinvestment Act, Fannie and Freddie had no role in commercial real estate and obviously didn’t contribute to the global real estate mania, which rampaged out of control in countries like Germany and Greece. They certainly committed a long list of misdeeds of their own, of course. The top echelons of Freddie were recently the long-overdue subject of Securities and Exchange Commission charges a few weeks ago. On Monday, ProPublica and NPR revealed the shocking story of how Freddie Mac bet that U.S. homeowners would be stuck in high-interest loans, at the same time that Freddie was making it harder for them to escape from those loans.

There will probably be more stories like that in the months to come. But the myth that Fannie and Freddie were the prime movers behind the financial crisis — in league with congressional liberals like Barney Frank — is a crock, concocted by the right for ideological reasons, to perpetuate the myth that banks were over-regulated, not inadequately regulated.

This alternate version of the history of the financial crisis, which Romney is embracing, is, in other words, a lie, what one astute financial observer, Barry Ritholtz, has called “The Big Lie” of the era. “Some [of the people pushing this nonsense] stand to profit from the status quo,” Ritholtz writes. “Others are hired guns, doing the bidding of bosses on Wall Street.” And then we have Romney, who knows perfectly well that it’s a lie — he didn’t get to be a multimillionaire by subscribing to crackpot theories — but also knows he must  pander to his party’s right wing if he hopes to win the White  House. Either that or, more remotely, he believes the swill he has been pushing.

Whether dishonest or deluded, Romney is a worrisome  potential guardian of the public’s interests against Wall Street abuses. Whatever the fate of his presidential aspirations, Mitt Romney has already accomplished a great deal for his cronies in the 1 percent, by further coarsening the national dialogue.