Sorry, Mitt, your nightmare’s not over yet

It’s Romney’s night in Florida, but Newt vows to make his pain go on … and on and on 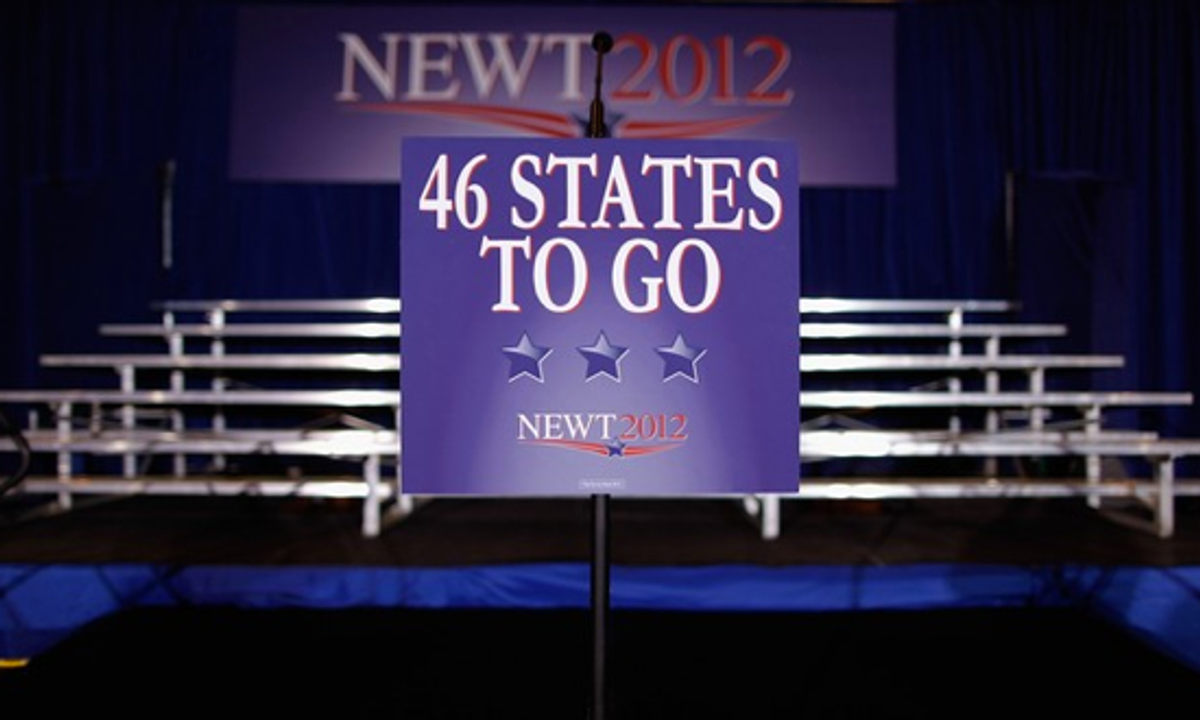 Mitt Romney spent the 10 days between South Carolina and Florida acting very much like a man with a primary to worry about, viciously and repeatedly attacking Newt Gingrich in speeches, interviews and debates.

But when he took the stage at his victory party in Tampa Tuesday night, he abruptly switched gears and presented himself as the presumptive Republican Party nominee, acknowledging Gingrich (and Rick Santorum and Ron Paul) only in passing and littering the air with carefully scripted put-downs of Barack Obama intended for general election ears.

This was a speech by a man who dearly hopes the Republican leaders and voters who have been so hesitant to embrace him will consider the Florida results and at last yield to his inevitability, bringing the competitive phase of the GOP primary season to an end before it hurts him any further.

And then Newt took the stage at his own Florida party and delivered a rambling and somewhat bizarre speech that nonetheless guaranteed Romney will face at least six more weeks of grief before he can put the nomination battle behind him. Standing at a podium decorated with a sign that read "46 states to go,” Gingrich vowed that “we are going to contest every place and we are going to win.”

His defiant posture was more of a confirmation than a revelation. As it became clear he was going to lose Florida by a wide margin the past few days, Gingrich repeatedly affirmed his intent to keep his campaign alive through the GOP convention. Since he’s 68 years old and not angling for position in a future election, it’s easy to believe that he means it, and that he’s made his spite with Romney clear only adds to his motivation to press on. And since Gingrich only really knows the language of attack politics, the potential problem for Romney is obvious. How do you unify your party if your main opponent won’t stop shouting that you’re a dirty, dishonest apostate?

So the real question coming out of Florida is how long Gingrich can actually go on. The literal answer is: as long as he wants. But from Romney’s standpoint, the issue is how long the political world will continue to treat Gingrich like a serious candidate. That is to say, Gingrich can remain an active candidate until the convention balloting if he wants; but if he’s getting clobbered in primaries and caucuses, accumulating few delegates, unable to force Romney into debates and largely ignored by the media, then his lingering presence won’t really be a problem for Romney.

This makes the next move of Sheldon Adelson, the 78-year-old Las Vegas casino magnate who has underwritten the last few years of Gingrich’s political life, crucial. When Adelson unexpectedly poured $5 million into a pro-Newt super PAC after the former speaker crashed and burned in Iowa and New Hampshire, it made it possible for Gingrich to bounce back and win South Carolina. If Adelson, whose wife gave another $5 million to the Super PAC in the run up to Florida, makes a similar play now, it will buy Gingrich priceless credibility with the media and political class. As long as Adelson keeps writing monster checks, Gingrich will be a factor, if only because the money will have the potential to damage Romney.

The other major factor is the calendar. February will be a light month when it comes to primary and caucus activity, with the limited playing field tilted heavily in Romney’s favor – Nevada, Arizona and Michigan are the headline contests. Assuming Romney wins these states comfortably, he’ll have an opportunity to build momentum in February and open up a significant lead over Gingrich in national polls, delegates and in later-voting states.

But Gingrich can probably maintain his relevance through all of this simply by pointing to the early weeks of March, when the Old Confederacy will finally get its say. The basic cultural and demographic characteristics that defined the South Carolina GOP electorate – heavy on Yankee-phobic, Tea Party-friendly conservative evangelicals – will be present in Mississippi, Tennessee, Alabama, Georgia and Louisiana when they vote in March. Gingrich can credibly sell those contests as the ultimate test of his “bold Reagan conservative” versus “timid Massachusetts moderate” framing of the GOP race, making it difficult to ignore him between now and then.

If he were then to win those states, all of the talk about Romney as a fatally flawed candidate for the Tea Party era would restart and the race would almost certainly last all the way to the GOP convention. It would be the modern equivalent of Ronald Reagan’s upset win in the 1976 North Carolina primary, which stopped Gerald Ford from putting away with the GOP race and triggered a late string of Reagan wins that kept the nomination from being settled before Kansas City.

On the flip side, a Romney sweep of Dixie in early March really would shatter the rationale for Gingrich’s campaign. At that point, it wouldn’t really matter if Gingrich stayed in the race; he would then be about as relevant to the GOP race as Jerry Brown was to the Democratic contest in the spring months of 1992.

But that’s six weeks from now. Between now and then, Romney can pretend all he wants that the race is over and that his new opponent is Barack Obama; every time Newt Gingrich opens his mouth, the press will be there to cover it, reminding Romney that he’s not out of the woods yet.