Catholics need to preach what we practice

When 98 percent of Catholics use birth control, why is Obama in hot water for making sure insurance covers it? 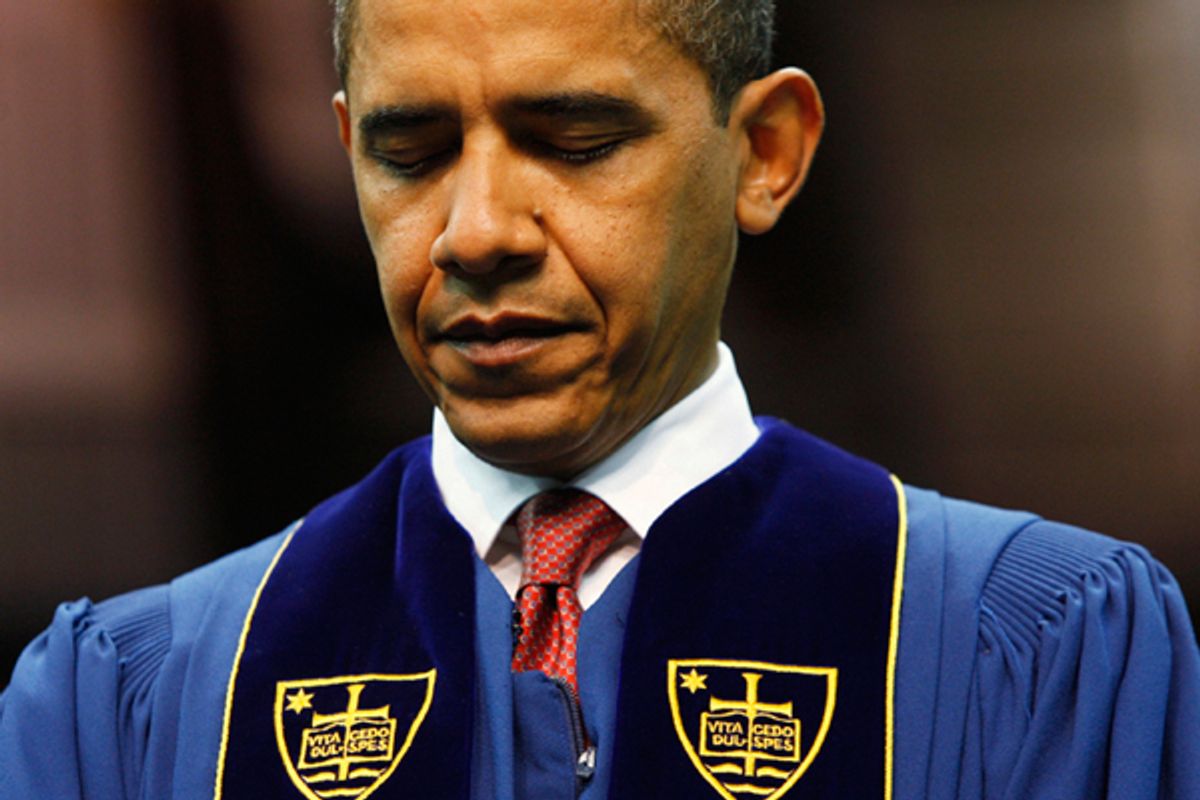 President Obama bows his head in prayer prior to speaking at the University of Notre Dame during commencement ceremonies in 2009. (AP)
--

I first learned that Catholics don't always practice what the church preaches about contraception when I was pretty young, no more than 12. My stay-at-home mom did the laundry, and it was my job to help her fold the clothes and put them in everyone's drawers when I got home from school. One day putting my father's socks away, I found a box of condoms at the back of his sock drawer. After a few awkward attempts at conversation, my devout Catholic parents came clean: They had only three kids, and almost all of our relatives had comparably small families, because most Catholics planned their families, too.

No one expected women's lives to be an unbroken series of pregnancies and births anymore. It was better for women that way – but also for children. (Not to mention for husbands, who no longer had to confine sex to the times of the month when women weren't ovulating if they wanted sexual pleasure without a special bonus nine months later.) The church was a wonderful institution, my parents said, but it was very old, and it sometimes took a while to catch up with the times. Kind of like the way Grandma still said "icebox" for "refrigerator."

That was at least 40 years ago. Far from catching up with the times, the leadership of the Catholic Church is trying to drag the rest of us backward.

I was disappointed to see the progressive Catholic E.J. Dionne, whom I really admire, accuse President Obama of throwing his Catholic allies "under the bus" by insisting that federal health insurance regulations requiring contraceptive coverage apply to Catholic institutions, if they employ non-Catholics. Note that the administration is OK with church-run institutions that only employ Catholics prohibiting contraception coverage. It simply won't let the church impose its teachings on non-Catholics. This shouldn't be a controversial decision.

Let's make a couple of things clear here. Obviously, the law won't force Catholics to use contraception. And 98 percent of Catholics already practice birth control (and not the "natural family planning" kind), according to the Alan Guttmacher Institute. It's not as though Catholics are an endangered minority of true believers being forced to transgress a fervently held and widely practiced church rule. This battle is over a Catholic Church teaching that even Catholics ignore almost unanimously.

The administration's requirement comes from the Institute of Medicine within the National Academy of Sciences, which considers contraception access part of a total healthcare plan that brings down maternal and infant mortality rates. The government sets minimal basic standards for the benefits and safety conditions employers must provide to employees. What if Catholic hospitals and universities and public agencies objected to occupational safety rules for doctrinal reasons? Child labor laws? Would people argue they should be exempt from those regulations? Of course not.

Now Catholic bishops are urging priests and parishes to rise up against the Obama administration's alleged violation of religious freedom. It's bad enough that men with no credibility on the issue of sexuality get to tell their fellow Catholics what to do. They do not get to tell the American president what to do.

Paradoxically, Dionne chides Obama for his contraception decision given the great lengths the president went to in order to make sure that his healthcare reform legislation wouldn't fund insurance that covered abortion in 2010. But as Dionne himself notes, the United States Conference of Catholic Bishops continued to dissemble anyway and insist the bill still provided abortion funding, despite a very public compromise by the president that angered many pro-choice Democrats. As the president has learned the hard way on many fronts, the politics of placating extremists only leads to more extremism. Obama was absolutely correct to draw a line in the sand here.

I think it's particularly important for Catholics – for all of us, actually  -- to take a stand on this, because of a related controversy in the news: The Susan G. Komen Foundation's deplorable decision to cut the funds it gives Planned Parenthood to provide breast cancer screening. Foundation head Nancy Brinker worked for the Bush administration, and the organization's pink-washing politics and business practices have come under fire before. But this latest decision is outrageously political, the result of an organized right-wing crusade against Planned Parenthood over the fact that a legally separate wing of the organization provides abortion services.

Of course, only 3 percent of Planned Parenthood's activities have anything to do with abortion. In many communities, the agency is the sole health provider for poor and/or uninsured women, offering screening for breast and cervical cancer along with basic female health services. In the past five years, Planned Parenthood has provided 4 million breast exams and referrals for 70,000 mammograms.  The Komen funds paid for 170,000 breast exams and 6,400 mammogram referrals over five years. Since this post started out personal, I should also note that in my Brooklyn-Long Island-Albany based family, my mother, my grandmother, three aunts and four cousins have been diagnosed with breast cancer; my mother and two of my cousins died, all between 45 and 52.

Unfortunately, Komen's relatively new vice president for policy, Karen Handel, is a right-wing Republican endorsed by Sarah Palin (cover your ears before you click the video) in her unsuccessful bid to become Georgia's governor. Handel describes herself on Twitter as a "lifelong conservative Republican, formerly Georgia Secretary of State." She made opposition to Planned Parenthood part of her failed gubernatorial platform, and Komen knew exactly what it was getting when it hired her. It's tragic the organization decided to get involved in the culture wars, particularly on the wrong side.

Right-wingers like Handel have tried to convince Americans that Planned Parenthood is about nothing but abortion, but increasingly it's obvious that the real goal is to criminalize birth control as well. I'd note the irony of people who oppose abortion working so hard to cut off funding for contraception, except to the doctrinaire Christian right and Catholic base, there's no irony. Sex is intended for reproduction. Rick Santorum has called contraception "a license to do things in a sexual realm that is counter to how things are supposed to be." None of the rest of us want to live in a country where such a narrow worldview is enforced. So let's remember: Every time a prominent organization or politician compromises on these issues, it doesn't mollify the forces of reaction, it emboldens them.

Planned Parenthood raised a stunning $400,000 in the day and a half after the Komen decision became public. You can donate here. It also got an additional $250,000 donation from the family foundation of Dallas philanthropist Lee Fikes and his wife, Amy. That is getting close to matching the almost $1 million Komen funds lost for this year, but they're not there yet. Do what you can.

Catholics have a special responsibility to speak out and defend President Obama's contraception decision. (And tell Komen to keep screening poor women for breast cancer, while you're at it.) We need to preach what we practice: Catholics like sex as much as the rest of y'all, and 98 percent of us plan our families. The president shouldn't be punished politically for doing the right thing. He should be praised.