Dealing with a nuclear state is preferable to another Middle East war, says Kenneth Pollack 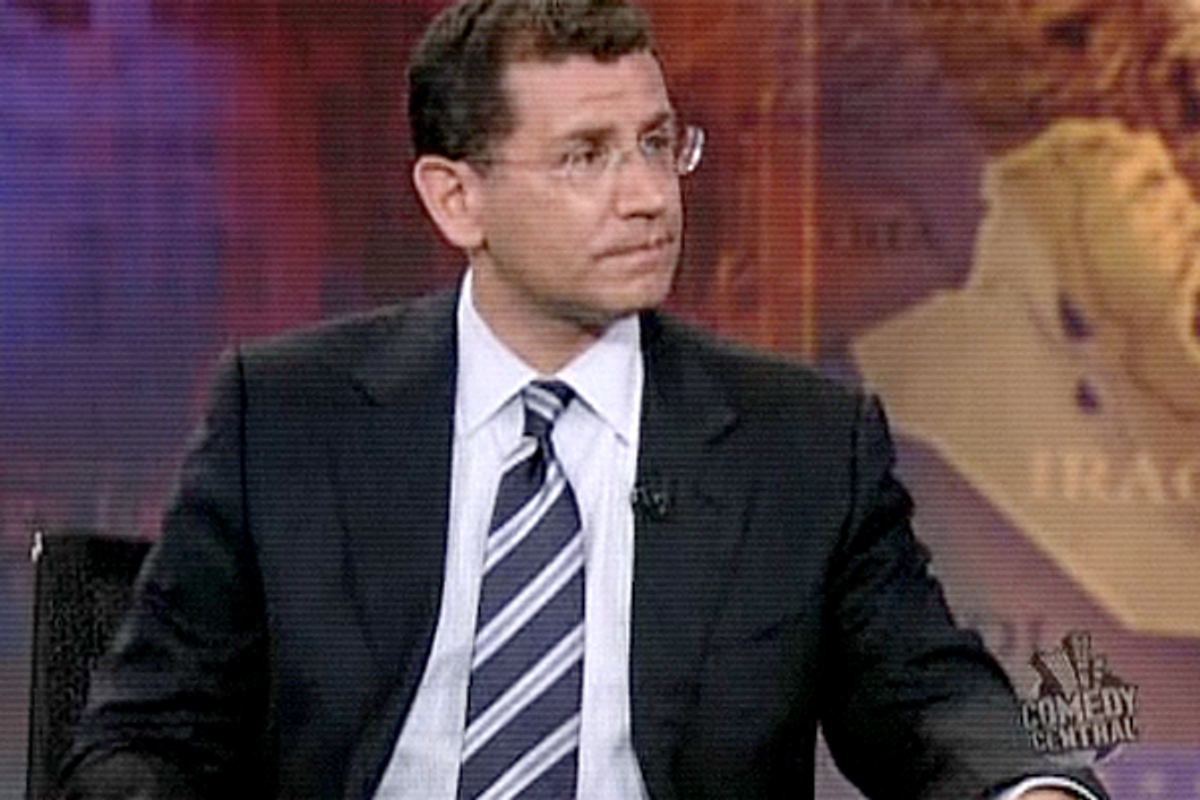 Kenneth Pollack: one Mideast war was enough (The Daily Show)
--

Kenneth Pollack has been among the most influential Middle East experts in Washington over the last generation. He directed Persian Gulf affairs at the National Security Council and the CIA. His 2002 book "The Threatening Storm" was profoundly influential in convincing some Democratic Party intellectuals and lawmakers that invading Iraq was a national security imperative.

All of which makes his views on Iran both surprising and significant. Pollack’s 2004 book "The Persian Puzzle" contended that containing a nuclear Iran was possible, if not desirable. Nearly eight years later, he has just written an important piece for the New Republic warning that the Obama administration's  policies are unwittingly leading us to war with Iran.

Pollack was one of the authors of America’s “dual-track” policy with Iran, whereby efforts at serious talks are coupled with sanctions. He is now convinced that policy is failing. “The problem is that Iran sees it very differently from the way we see it,” Pollack said in an interview. “They put our efforts in terms of human rights and reaching out to the opposition, as well as the sanctions, in the same scheme as what the Israelis are doing, which includes assassinations, acts of sabotage, cyberattacks; and what the Saudis are doing, which is aid to basically every group fighting the Iranian proxies all over the Middle East; and what the British are doing, which is gathering information.”

Cumulatively, he says, these efforts are convincing Iran not that it should relinquish its nuclear efforts but that it is under attack: “To the Iranians, this looks like a concerted Western covert war against them.” The current hard-line regime in Iran takes this as the threat of war, and is prepared to fight a war rather than back down, Pollack says. His TNR article points out the ways in which U.S. policies toward Iran, intended as an alternative to war, are leading us directly to that result.

“I do not think we should go to war with Iran, and it is very clear to me that the president doesn’t want to go to war with Iran, and my concern is that the way we are doing things makes it increasingly likely that we will go to war,” he says. Pollack doesn’t want to see Iran with nuclear weapons. He concedes that containing Iran will be difficult. The nuclear standoff between the Soviet Union and the Americans in the Cold War was far more dangerous than people remember, says Pollack, and he shudders at those standoffs with Iran. But “if you give me a choice between war and containing a nuclear Iran, I will choose containment every time,” he says.

At the same time, he thinks diplomacy with Iran is probably a lost cause, but should still be attempted.

“I don’t think this regime has any interest in serious negotiations, because my reading of [Supreme Leader] Khamenei and the Revolutionary Guard leadership, who are the ones running the Iranian government, is that they see engagement with the United States as subversive. They see it as what will bring about the end of their regime.” That is why when they do show up to talk, they send people to do nothing but read talking points, he says.

Still, even a tiny chance that negotiations will pay off is worth taking, because it is the best solution of all. At the very least, it’s important to show the world and the Iranian people that America doesn’t want a war with Iran, he says. “This is one of the great victories of the Obama administration — they convinced the Chinese and the Russians they we are not the problem, that Iran is the problem. They are right in saying that they have gotten unprecedented international support for the coalition.” The administration had the right policy, Pollack says, “but they need to ask themselves whether that policy can still work.”

Pollack’s perspective is informed by his experience with Iraq. He was instrumental at the CIA and NSC in implementing sanctions against Iraq in the 1990s, sanctions that he rightly calls “the most draconian sanctions ever in history, probably.” Those sanctions ultimately failed, in preventing war, in being a humane policy, and in persuading the court of international opinion.

“Everyone assumed that Saddam Hussein would have to do what the international community wanted, because he wouldn’t dare to starve his people to death. But guess what? He decided to starve his people to death.” About Iran today, he says, “Everyone thinks now sanctions are so great, we’re putting so much pressure on the Iranians, but I don’t think it’s going to be enough pressure to get the Iranians to cave, and in one or two years we’re going to hear that the Central Bank sanctions are too harsh, and they need to be lifted. That’s what happened in Iraq.”

He grants that the failures of the Iraq War have “partly” shaped his thinking, but bristles at the suggestion that they play any larger role in his views on Iran.

“I know everyone loves to talk about Ken Pollack, the liberal hawk,” he says. “My argument in the book — you probably didn’t read my book because nobody bothered to read my book — was that Saddam was a unique character, and I think all the stuff we’ve learned about in the postwar has made that case that he was a unique, and a uniquely dangerous character. And while I don’t like the Iranian regime, and I think they are very problematic and troublesome in many ways, they aren’t Saddam Hussein. They don’t fall into the same category.”

In "The Threatening Storm," Pollack argued that a large-scale war needed to be fought with Iraq. He seems now to believe not that the war was a mistaken idea but that it was improperly executed. By slipping into war with Iran without proper forethought and planning, the U.S. is repeating its mistakes.