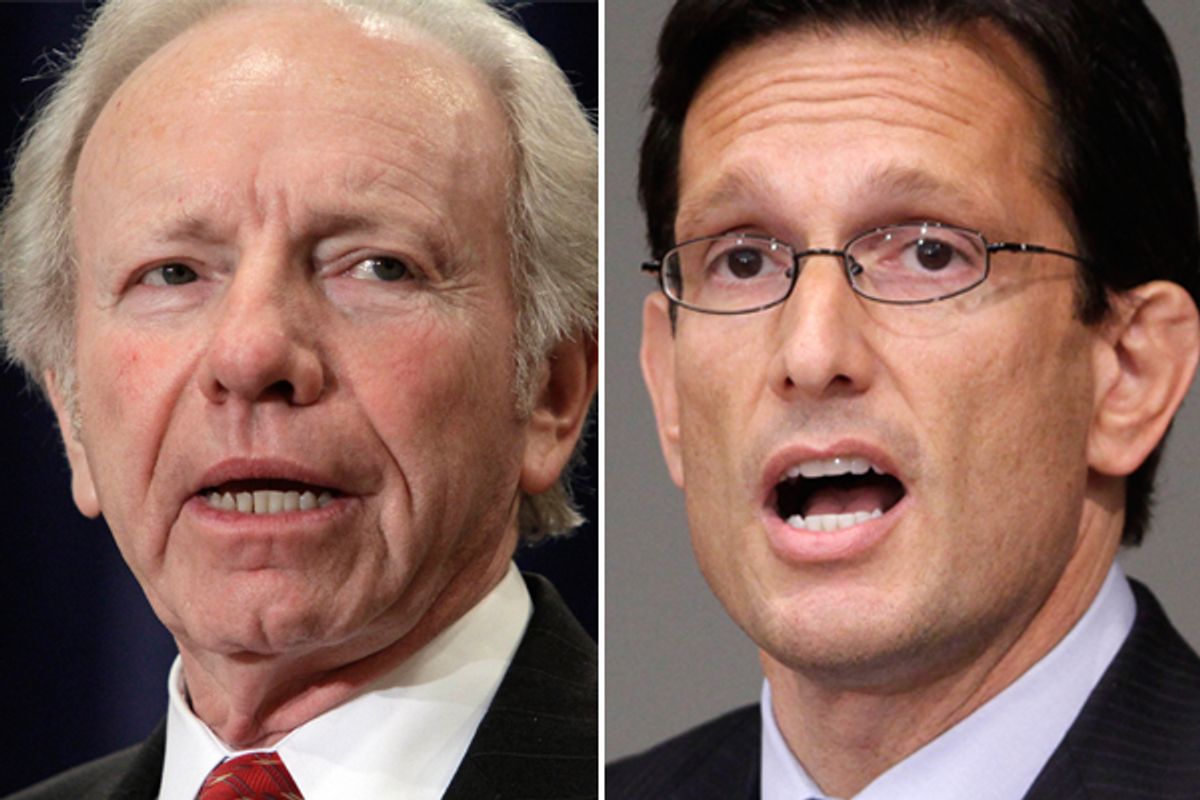 "Send me a bill that bans insider trading by members of Congress," President Obama told the assembled members of the House and Senate in his State of the Union address last week, "and I will sign it tomorrow."

If only it were that simple.

The Stop Trading on Congressional Knowledge (STOCK) Act, a bill that prohibits legislators and federal officials from knowingly profiting off of nonpublic information related to impending legislation and regulatory decisions, looks certain to pass the Senate this week. On Monday, senators overwhelmingly approved a motion to cloture on S.2038 preventing the bill from being filibustered. But on Wednesday in the House of Representatives Reps. Tim Walz, D-Minn., and Louise Slaughter, D-N.Y.,  demanded a straight up or down vote on a different bill, HR 1148, also known as the STOCK Act. The House bill already has 271 sponsors.

And therein lies a tale of Washington. No one in Washington favors allowing Capitol Hill insiders using non-public information to reap profits -- at least not publicly. But privately, well, that's a different story.

The Senate version of the STOCK Act differs from the House version in crucial ways.  The House bill regulates the so-called political intelligence industry, which consists of lobbyists and private businesses who milk information from members of Congress and their staff and sell it to hedge funds and other investors. The House bill requires people in the political intelligence industry to register as lobbyists. The Senate bill merely calls for study of this obscure sector of the Washington economy, which is worth an estimated $100 million, according to the Wall Street Journal.

As the Journal explained last year:

Information about what's happening in Washington is at a premium on Wall Street these days. Government regulatory changes and economic initiatives following the 2008 financial crisis have affected numerous industries, and even minor shifts in policy can be of interest to hedge-fund managers. When the health-care bill was snaking its way through Congress in 2009, for example, hedge funds wanted to know about every twist and turn. They followed the debt-ceiling showdown over the summer just as closely.

Keen for information about what's happening behind the scenes, hedge funds have been drilling ever deeper into the government. Thousands of political insiders are being paid by hedge funds, private-equity firms and other big investors. Former Federal Reserve Chairman Alan Greenspan, for example, is an adviser to Paulson & Co., and former Treasury Secretary John Snow works for Cerberus Capital Management. SAC Capital Advisors and Eton Park Capital Management have hired former congressional staffers.

The move to limit the scope of the STOCK Act seems to have been led by the U.S. Chamber of Commerce and the less prominent but no less well connected Managed Funds Association. According to 2011 lobbying disclosure forms, lobbyists for both groups reached out to Congress with their clients' concerns about the legislation.

According to Craig Holman, government affairs lobbyist for Public Citizen, a transparency advocacy group that lobbied for the House version of the STOCK Act, the two groups were especially concerned about the regulation of the political intelligence industry.

The U.S. Chamber of Commerce represents some of the most powerful corporations in America and spent almost $350 million lobbying Congress over the past three years, according to OpenSecrets.org. A spokesperson for the Chamber said that the group has not taken a position on the STOCK Act.

The Managed Funds Association lists influential investment firms and banks, such as Goldman Sachs, Bank of America, Citigroup, JP Morgan Chase, UBS and Barclay's Capital as “strategic partners." The group's senior advisors include representatives from Eton Park Capital Management, which received an insider tip about Fannie Mae and Freddie Mac from former Treasury Secretary Hank Paulson in July 2008, as well as representatives from Paulson & Co.,  SAC Capital Advisors, and Soros Fund Management. A spokesperson for the Managed Funds Association declined to comment on the STOCK Act.

Whether or not these lobbying groups had a hand in the writing of the Senate bill, its provisions provide protections to the political intelligence industry that the House bill does not.

Walz's version of the STOCK Act prohibits  “any person from buying or selling any commodity for future delivery or swap while the person is in possession of material nonpublic information relating to any pending or prospective legislative action” or “material nonpublic information derived from Federal employment relating to the commodity.” It also requires  political intelligence firms to register as lobbyists under the Lobbying Disclosure Act of 1995.

The Senate version of the STOCK Act, sponsored by Sen. Joe Lieberman, I-Conn., is less comprehensive. It merely prohibits any “Member of Congress and ... employee of Congress” from using “any nonpublic information derived from the individual's position as a Member of Congress or employee of Congress, or gained from performance of the individual's duties, for personal benefit” (emphasis added). The actions of people in the political intelligence industry who use their congressional connections to sell information to the hedge funds would not be covered.

Rep. Slaughter, who has been championing the STOCK Act for five years, believes that curbing the power of the political intelligence industry is a crucial part of restoring the public's trust in Congress.

“Our constituents didn't send us here to line the pockets of hedge fund managers,” she has said. “If there was ever a case to show that Wall Street and Capitol Hill have become too cozy this is it, and the political intelligence industry is in desperate need of transparency, meaning they should register as lobbyists do.”

The House version of the STOCK Act got a boost from a “60 Minutes” feature on congressional insider trading last November that reported how members of Congress had used their insider's knowledge to make profitable stock transactions. But when Republicans and Democrats rallied to support the House bill, House Majority Leader Eric Cantor, R-Va., suddenly balked. He canceled the mark-up by House Financial Services Chairman Spencer Bachus, R-Ala. – a major player in the “60 Minutes” feature and one of those eager to row back from the scandal. Cantor, who came under fire himself for having made a $15,000 bet on the dollar's decline before last year's summer debt ceiling fight, later told CBS News that he wanted to ensure that the legislation accounted for more than just deals based on the trading of financial instruments.

After Obama's speech, Lieberman and Cantor scrambled to protect the Senate bill.

In a colorful floor speech on Monday, Lieberman resisted amendments to his bill by invoking  Thidwick the Moose, the kindhearted creature in a Dr. Seuss book who allowed so many of his fellow animals to climb on his antlers that they eventually fell off. ("Dr. Seuss," it should be noted, was the pen name of the late Theodor Seuss Geisel,  a liberal Democrat, who would probably not be amused to learn that one of his fictional creations had been conscripted in the effort to protect the paid informants of Wall Street tycoons.)

For his part, Cantor told Politico yesterday that he wanted to "strengthen" the Senate bill without changing the language that calls for the study — not regulation — of the political intelligence industry.

It's not hard to guess why Cantor and Lieberman want to leave the political intelligence industry unregulated. According to the Sunlight Foundation's influenceexplorer.com, they are both major beneficiaries of securities and investment firms. The House majority leader and the senator have received just under $1.4 million and $3.8 million, respectively, in campaign contributions from securities and investment firms over the course of their political careers.

In a statement released after Monday's cloture vote, Cantor said that he is “pleased” with the Senate bill, but  reiterated that he wants to have the final legislation account for more than just financial transactions based on securities exchanges. He also wants the bill to more thoroughly cover the personal finances of members of the executive branch. He said the bill did not "go far enough."

As  for regulation of  the political intelligence industry, he suggested that would be going too far.

“I think that the Senate bill ... speaks to the potential misuse of that kind of information and untoward activity on the part of, not Members of Congress, but others that are in the business of monitoring Washington,” he said on Tuesday at a press conference. “I think that in advocating -- in putting forth a directive to get underneath that kind of activity -- to really begin to determine what it is -- is something that is helpful."

If you parse Cantor's nervous language, he is saying more time is needed to assess whether or not Congress should prohibit private interests from cashing in on insider knowledge harvested on Capitol Hill. If Cantor and Lieberman have their way, the Stop Trading on Congressional Knowledge Act will ensure that some people can continue secretly trading on congressional knowledge.

Walz and Slaughter say they will file what is known as discharge petition to advance their bill this week.  If a majority of the House signs the petition, the bill can immediately advance to the House floor for consideration. Whether their bill will reach President Obama's desk is still in doubt. The hidden power of Wall Street and the hedge funds — "the political intelligence industry" — is not.