Detainees say medical treatment was conditioned on remaining in jail 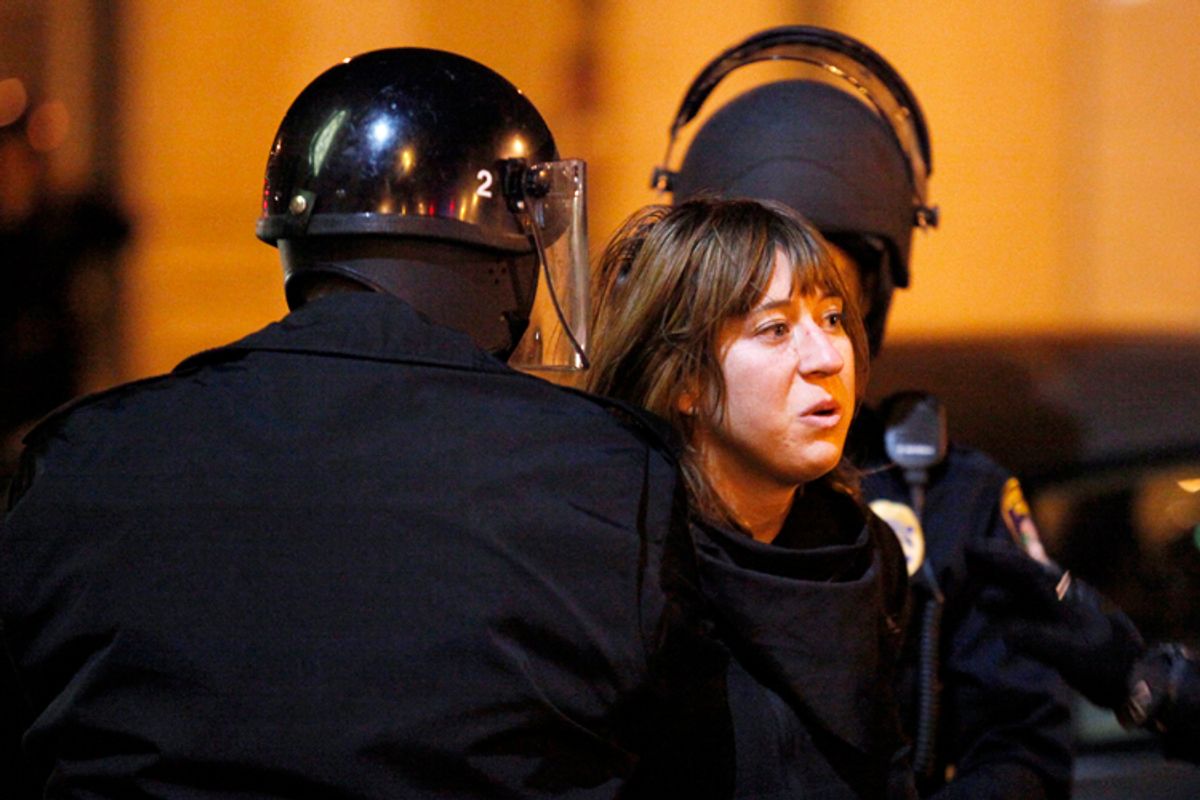 You can forget about your meds (AP/Beck Diefenbach)
--

The Alameda County Sheriff's Department in California has earned itself a reputation for heavy-handed responses to Occupy Oakland. Since Tuesday, allegations of abusive treatment by officers have escalated as arrestees detained during Saturday's mass Occupy actions in Oakland were released after up to three-day stints in holding cells at the department's Santa Rita Jail.

Salon has received three firsthand accounts, corroborated by reports from Occupy Oakland's media team and the National Lawyers Guild, that ill and injured inmates were denied medication including anti-retroviral treatments for HIV-positive detainees.

"I am a person living with HIV and I was held for over 30 hours in Santa Rita and denied my prescription medications on multiple occasions by jail staff," one 28-year-old arrestee told Salon via email, asking to remain anonymous as his family are currently unaware of his HIV status. "I know three others with HIV and many others with psychiatric prescriptions who were also held without being given their meds," he added.

Carey Lamprecht of the National Lawyers Guild San Francisco Bay Area Chapter and Occupy Legal collective confirmed that "two HIV positive individuals were held without access to medication for over two days at Santa Rita jail." Lamprecht added that one man who usually takes anti-retroviral drugs every four to six hours went without a dose for over two days and was unable to access a legal counsel for more than a day while detained, as the large number of arrestees were constantly moved around the jail.

Different individuals living with HIV face different risks from missing doses, depending on their T-Cell, viral load counts, anti-retroviral therapy regimens and other factors. The risk, especially for individuals with low T-Cell counts is that the virus mutates rapidly and can develop resistance to medication if doses are inconsistent. The young man who spoke to Salon said that although his T-cell counts are “in the healthy range ... none of the guards or medical staff ascertained any of this information” to determine the relative risks of detainees going without medication.

"It felt like we had disappeared. Deputies often didn't know where individuals were and wandered from cell block to cell block looking for individuals to process," the man said. "On multiple occasions, my cell block mic checked the guards and led chants, demanding in one voice medicine, food, and other necessities like toilet paper and maxi pads."

Other stories about mistreatment published in Daily Kos could not be substantiated. Salon found no information to confirm rumors that female detainees were forced to urinate in front of male officers, that detainees were beaten in their cells or that guards sprayed tear gas into the cell vents.

The denial of medication appears to be the most common complaint. According to a release from the Occupy Oakland media team, "detained protesters were kept in painful zip tie handcuffs -- some for 8 to 12 hours -- were not allowed to access bathrooms and were not given medical treatment for injuries or illness."

Claire, 28, a special education teacher for the Oakland Unified School District, was another such detainee. She arrived at Santa Rita a little after midnight Saturday, following her arrest as a part of the previous day's Occupy actions. She suffers from severe depression and anxiety disorders, for which she takes a medication called Celexa twice a day.

"The first person I notified about my need for medication was my arresting officer (Hazelwood)," Claire told Salon, via email. "I believe he noted it somewhere in my paperwork. He told me that I would be able to see a nurse at Santa Rita, and that they have several antidepressants available there,"

On being seen by a nurse, Claire mentioned her condition again and that she had gone 24 hours without medication. "The nurse signed the form to indicate that I was cleared to be put into a holding cell. Several times over the course of the night and next day, I and a few others in my cell told guards outside that we needed medication, but were ignored," she added.  During her detainment, Claire suffered from a mild but prolonged panic attack, during which she had difficulty breathing and controlling her muscles. She told Salon:

Around five p.m. on Sunday, a guard asked for the women who needed medication to come out of the holding cell, and said we would be processed and seen by a nurse. We were then fingerprinted and had mug shots taken. I again asked if I could see a nurse and explained my condition. I was told that I would not be able to see a nurse unless I wanted to stay in jail. The officer also stated that I would be getting out the following morning (Monday). Around midnight, we were released.

Alyssa Eisenberg, a 44-year-old Occupy activist and single mother, was also not given access to medication for 12 hours during her 18-hour detainment at Santa Rita. Eisenberg suffers from multiple sclerosis and retired early from social services work due to disability. She told Salon that she takes medication at least twice a day for pain and to aid with concentration, as her M.S. has led to cognitive dysfunction and memory loss.

"I was particularly concerned about the cognitive condition, about not understanding quickly what was going on in jail and struggling to process what guards were saying to me," she said. Like others, Eisenberg informed a nurse of her medical condition and said that she saw at least two other people also express a need for medication. Eisenberg says she was detained for over 12 hours before being told that if she wanted to take pain medication, she would have to remain in jail for at least four more hours for observation. She told Salon that, based on comments from a number of officers, she believed she was soon to be released and so declined the medication, but was then held for six more hours.

"It was more than dehumanizing," said Eisenberg, noting how lucky she felt that her detainment was so brief compared to long-term inmates.

Sgt. J.D. Nelson of the Alameda Sheriff's Department said the allegations of mistreatment were "not true." He described the claims of abuse and beatings as "ridiculous." He also told Salon that, to his knowledge, no legal proceedings have currently been filed against the department relating to these allegations. When questioned  about reports that medication was withheld from HIV-positive detainees, Nelson said it was the first he had heard of this and noted that all detainees are seen by a medical professional. "People make claims," he said, "I'm not saying it's true or not true. A claim is a claim."

Lamprecht told Salon that the National Lawyers Guild's first concern would be to address charges facing any of the 400 people arrested during Saturday's action before considering whether to pursue civil suits against the Sheriff's Department.

According to the 28-year-old who was denied access to his anti-retroviral treatment, the events at Santa Rita created new, unexpected affinities. “Some of the prisoner orderlies were so inspired by our agitation in jail that they approached us (when out from under the eyes of the guards) and told us they would be joining us at Oscar Grant Plaza when they had finished their time,” he said.