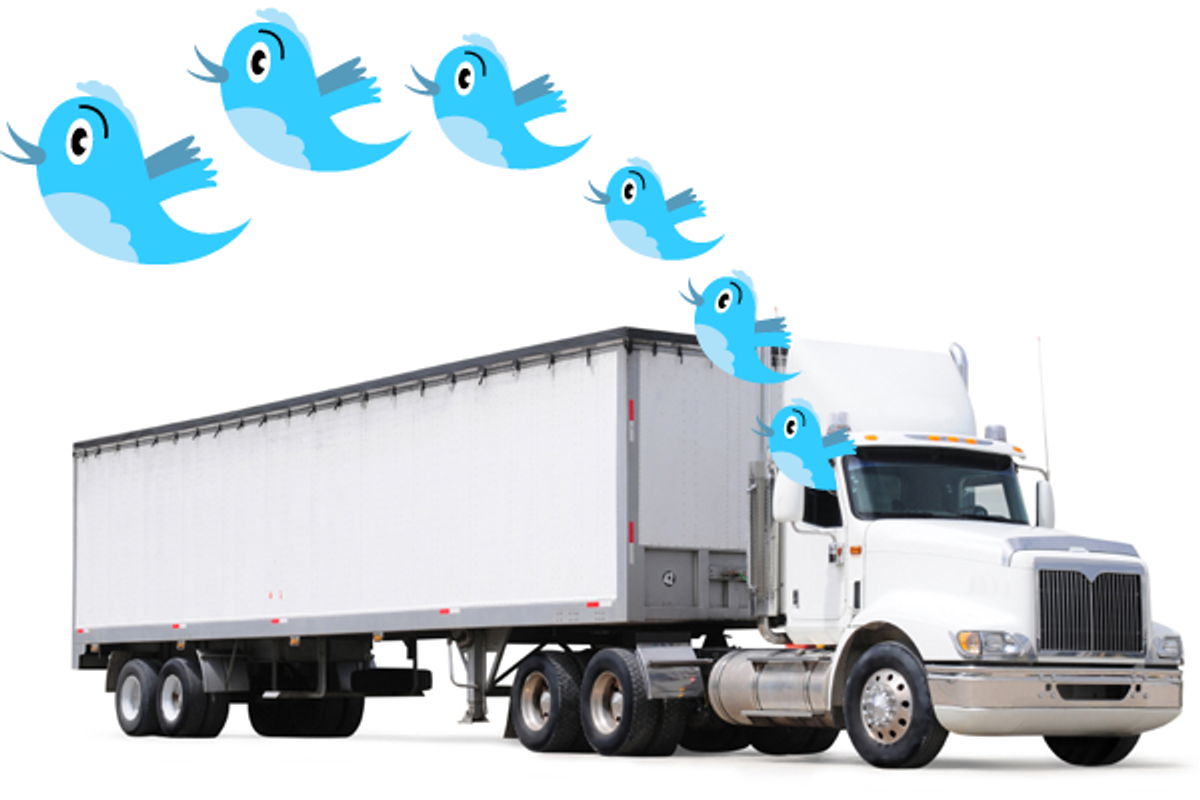 Rich Wilson is telling a roomful of truckers how to sound less like, well, truckers. “Intelligence, not ignorance,” he instructs. “If you have to, Google a few words. Refrain from words like ‘ain’t,’ ‘gonna,’ ‘y’all’ or ‘you-know-what bureaucrats.’”

Wilson, himself a former truck driver, is speaking at the first-ever Trucking and Social Media Convention, and he's trying to get those assembled to formally register comments on a federal transportation site in response to new regulations. That these phrases he tells them not to use are all direct quotes from previous comments will not dampen his determination. “Until we learn where to start, we’re just going to end up with that angry attitude,” Wilson says. “But let’s fight the bureaucrats with bureaucracy!”

So it’s not the fieriest of rallying cries. Most of the 170 drivers and advocates gathered at the Gold Strike Casino in Mississippi’s second-tallest building (31 stories) are plenty fired up already: at new federal regulations and local traffic enforcement, at big carriers, at the perception that despite their toil, truckers don’t get any respect. Post-deregulation realities and the decentralized nature of their jobs have largely left them without a seat at the table. That leaves Twitter.

Once, truck drivers flashed their lights at each other in an over-the-road Morse code, and they still narrate woes over CB radio. It's not that they've all jumped on Twitter, but the vanguard of social media enthusiasts gathered at the Gold Strike in Tunica is hoping that's where it's headed. And they want to take it to the next level: They trade notes on the best analytics provider and Twitter clients. Murmurs a redheaded woman in a “Keep on Trucking” T-shirt, “I love Hootsuite.”

Unity in this atomized industry is rare, unless you count the kind that comes with a “Truckers Move America” belt buckle. Wilson was part of the 1979 strikes, when a convoy of truckers circled the U.S. Capitol and 75,000 truckers hit the brakes, but he doubts it had much impact or that it could happen today. “You have company drivers and you have owner-operators, you have small fleets and you have big fleets,” he says. “Now let me ask you a question, can you see those people all sitting in a room saying, ‘I’ll tell ya, we’re gonna strike’?”

Everyone laughs and whoops in disbelief. And then they get back to updating their Facebook business pages.

Business is something of profound interest to the truckers here. Kenyan-born Eddie Gichuhi, a software engineer who took up trucking after getting laid off, is here to talk about his new trucking-aimed bookkeeping software. Beside him, event emcee Toby Bogard, the author of several self-published books on trucking, trumpets how much weight he lost through his trucker-tailored diet and exercise program, “Shattering the Stereotype.” (Get a preview of the DVD, complete with a view inside his truck, on his “Truck-Writer” YouTube channel.)

To a lesser extent, they're also interested in activism. Desiree Wood became an activist after speaking out about the trials of trucking while female on Ask the Trucker, the site founded by conference co-organizers Allen and Donna Smith. Suddenly, scores of comments and emails poured in from fellow women truckers about sexual harassment, poor training and much more. Wood’s off the road because of an injury, but still rallies her 8,000 Twitter followers (her bio reads in part, "Pretty+Smart)/Entertaining)=Lethal”). Conference honoree Hope Rivenburg, who was pregnant with twins when her trucker husband, Jason, was murdered while waiting for a load, took to Capitol Hill and social media alike to rally support for a federal safe truck parking law, which remains pending in Congress.

Sometimes, the lure is simpler. Sue Noonan  -- @trukersue [sic] on Twitter -- says she got into social media for one reason: “You can say anything you f—cking want to.”

“I am so proud of the deaf truckers,” beams Donna Smith over dinner. “I told them, you can’t just care about deafness. You have to care about all the issues.” And the deaf truckers, who have their own table with a service dog and an amateur ASL interpreter and who solemnly nod along with the proceedings, agreed that they would.  (The hot topic on the Deaf Truckers United Facebook group has been the possibility of Department of Transportation waivers of hearing requirements for commercial driving licenses, or CDLs).

The Smiths hoped for a bigger turnout, but it’s not easy for drivers to get their dispatcher to route them through somewhere in particular, let alone to take a day off.

The convention’s renegade spirit may not help. “You do know the trucking industry is against this,” Donna says, lowering her voice conspiratorially. The powerful lobby that is the American Trucking Association is no one’s favorite here. An invitation to the Federal Motor Carrier and Safety Administration, which issues safety and hours of service regulations for truckers, drew a cautious reply but never went anywhere.

Hence the lure of blogging and tweeting, which can be a platform for niche causes as well as a booster for morale and community. The problem is not just the stereotypes of truckers as ignorant, fat or even dangerous, though along with the official classification of trucking as unskilled labor, they hurt too. Since the deregulation of the trucking industry in 1980, drivers have paid some of the price for the fast, cheap products Americans enjoy. According to Michael Belzer, author of "Sweatshop on Wheels: Winners and Losers in Trucking Regulation" and a professor at Wayne State University, truckers' real wages fell by 30 percent in the three decades after deregulation, as union membership cratered and carriers rapidly entered and exited the industry. (Even if the traditional anti-union sentiment among the truckers were to subside, the companies all have nationwide operating rights, and many are independent contractors, making it nearly impossible to organize long-haul truckers.)

The irony is that truckers themselves helped pave the way for all this. Those occasionally violent strikes throughout the '70s were led by Mike Parkhurst, the editor of Overdrive magazine, who testified before Congress on behalf of deregulation: “If the mood of America is for a rebirth of free enterprise, there is no nobler cause than that of the independent trucker.” It was in keeping with tradition; the first long-haul truckers were farm boys who resented the government-planned food economy, railroad monopolies and union power all at once. Still, despite the romantic image of the trucker as the “last American cowboy,” the reality of an independent trucker’s life was more like a sharecropper’s, according to Shane Hamilton’s "Trucking Country: The Road to America’s Wal-Mart Economy." But there were few rural alternatives, and being a trucker carried the allure of being “a man in control of his time and possessing an untamed sexuality … the antithesis of the ‘organization man’ or the ‘man in the gray flannel suit.’”

The federal government is still cramping that style, imposing new safety and accountability standards and metrics on drivers -- a sore point at the convention. Belzer says, “To blame the drivers is generally the rule,” but argues that instead of focusing on the individual trucker’s behavior, regulators should be looking at how the broader system incentivizes them to take risks, including violating required hours of service. Trucker pay is by the mile and the load, not the hour, but Belzer’s research suggested that truckers spend a quarter of their work time waiting, unpaid, for a terminal or warehouse operator who, in turn, has no incentive to hurry up. As Paul Taylor, an attorney who often represents truckers, puts it at the convention, “You work 100 hours a week, log 70, get paid for 40.”

At 50, Tony Hamilton can still remember the old days. “It seemed like it was a profession, like everyone was more dedicated. Now people fall back on this as a secondary job because it’s basically easy to get into,” he says, adjusting his suspenders over an American flag button-down. “You go to a school, you get your CDL, you’re put on a rig. Do you know what you’re doing? Probably not. Are you going to be around long enough to learn? You never know. Are the companies taking advantage of you? Yeah, probably.”

He says he’s making maybe 10 percent more than he did in 1985, without adjusting for inflation. In the last year, the carrier he worked for shut its doors without paying its drivers what they were owed. Hamilton’s trying not to let it get him down – he’s here representing a group that helps truckers in a jam as well as one that uses truck routes to transport animal rescues.

And the conference has encouraged him to join Twitter. “I’m a loner ... so I’m trying to learn how to use it,” he says. But he already uses Facebook and call-in phone chat rooms for drivers. “Why [do you] have to talk to the one in front of you if you can talk to the one 3,000 miles from you? If you’re got the media, why not use it?”