The Super Bowl is not a job creator 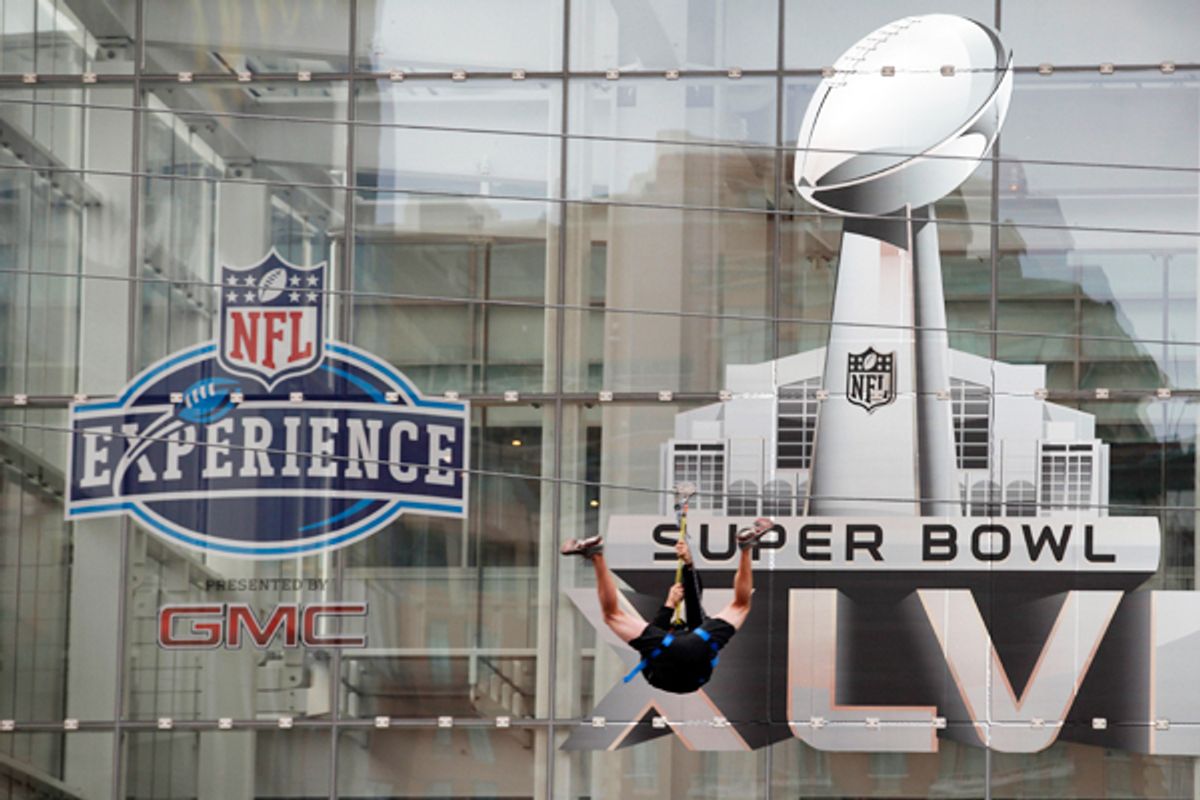 Roger Goodell, the commissioner of the National Football League, argued on "60 Minutes" last Sunday that the NFL is one professional organization designed to appeal to the economic interests of the little guy: Its revenue-sharing model, he said, gives a fighting chance to squads from Green Bay and Buffalo as well as to those from large media markets like New York, Los Angeles and Boston.

On the eve of the Super Bowl, Goodell was touting the familiar idea that the sport's biggest game is a boon to economic development. But with the cost of a ticket now averaging  $3,982 and 30-second television spots selling for $3.5 million, the Super Bowl can appear to be more an occasion for ostentatious excess than an engine of development.

This year’s Indianapolis Super Bowl Host Committee, which has a budget of $25 million, predicts the game will inject anywhere from $150 million to $400 million into the local economy, according to Dianne Boyce, communications director for the host committee.

Amid the continued economic uncertainty, this may sound like a lot of money. But for a major metropolitan city, the impact will likely be  short-term only.

Consider last year’s game at Cowboys Stadium in Arlington, Texas. The North Texas Host Committee's executive summary from April 7, 2011, summed up its belief that the game was an unprecedented economic catalyst for the region, declaring grandly:

But  the Dallas News reported last February that the “Super Bowl was not a rising tide that lifted all boats ... Hotels and restaurants that were part of official NFL activities, or apt to attract A-listers, reported full rooms and brisk business. Other food sellers and hoteliers said great expectations faded as the week wore on and the hoped-for masses failed to materialize.”

According to Bureau of Labor Statistics data for Dallas-Fort Worth-Arlington, a small portion of steady job growth in the 10 months that followed could be attributed to the game. The  Dallas Business Journal reported last week that unemployment in Dallas has dipped from 8.5 percent last January to 7.1 percent. But Bill Lively, the president and CEO of the 2011 North Texas Super Bowl, conceded in an interview the 2 million-plus population of Dallas made it unlikely that the game would be responsible for extended increases in employment.

To Lively, the game served an important community function: unifying three important regions of Texas. The cooperation between Fort Worth, Dallas and Arlington was a “real triumph” that catapulted a city to greatness. He hopes that the Super Bowl will return to the area soon.

Duane Dankesreiter, the vice president of the Dallas Regional Chamber of Commerce, also stressed the secondary benefits of hosting the big game. “The global exposure of an event of that size is tremendous. It gave us an opportunity to introduce North Texas to millions of people and to spread the word about what a great place DFW is to live and work,”  he said.

But the Super Bowl did not figure in the city's long-term economic planning, says Daniel Oney, who works in the Dallas Office of Economic Development. He told me that his office did not  engage in broader strategic thinking about hosting it.

"I’m not aware of anything we did to support or hinder the Super Bowl," he said.

Dennis Coates, a professor of economics at University of Maryland with a specialty in sports, said that all evidence from “benefits, employment, tax revenue generation and so on ... indicates that proponents wildly exaggerate the impact of the Super Bowl.”

Mark Rosentraub, a professor of sports management at the University of Michigan, urges the public to “resist trying to make the argument that there are any meaningful or long-term economic effects” from hosting a Super Bowl.

The Dallas Host Committee did boast of a $7.15 million surplus from last year's game. Texas journalist Scott Nishimura reported in the Fort Worth Star-Telegram that the windfall was redirected toward charity and a new Super Bowl bid, rather than broader economic development. According to the committee, the funds supported:

the NFL Youth Education Town (YET) center for at-risk youths, which is being built in Arlington as the league's “legacy” project for the area; the North Texas Food Bank; the Tarrant Area Food Bank; and the NFL's Slant 45 service projects in North Texas. The YET center, scheduled to open early next year, will receive half the surplus beyond the $2 million reserve; the food banks will get 20 percent each; and Slant 45 will get 10 percent.

Like Dallas, Indianapolis is relying on the hope that the secondary perks of the game will translate into future business. Boyce has told me and other journalists that the “NFL estimates that over 60 percent of those people are corporate decision makers, so those are key people who, if they come to Indianapolis and have a positive experience, will come back.”

For Indianapolis restaurateurs and business owners, the hope is that the economic surge crosses class lines this year. That forecast is more plausible in Indianapolis, where the events are centralized in the city, whereas the commerce generated by last year's game was spread across three localities of metropolitan Dallas. But in Indianapolis, Boyce said that there is no comprehensive economic strategy for channeling the short-term economic gains into the long-term development of  the city.

The economic benefits of this year's Super Bowl will not be tallied until after the Lombardi Trophy is awarded on Sunday. But don't be surprised if they are modest.

Alexander Heffner is a freelance journalist whose writing has appeared in the New York Times, Washington Post, and Boston Globe.