When my retirement plan exploded

After my savings sank with the economy, I found myself somewhere I hoped I'd never be: The unemployment office 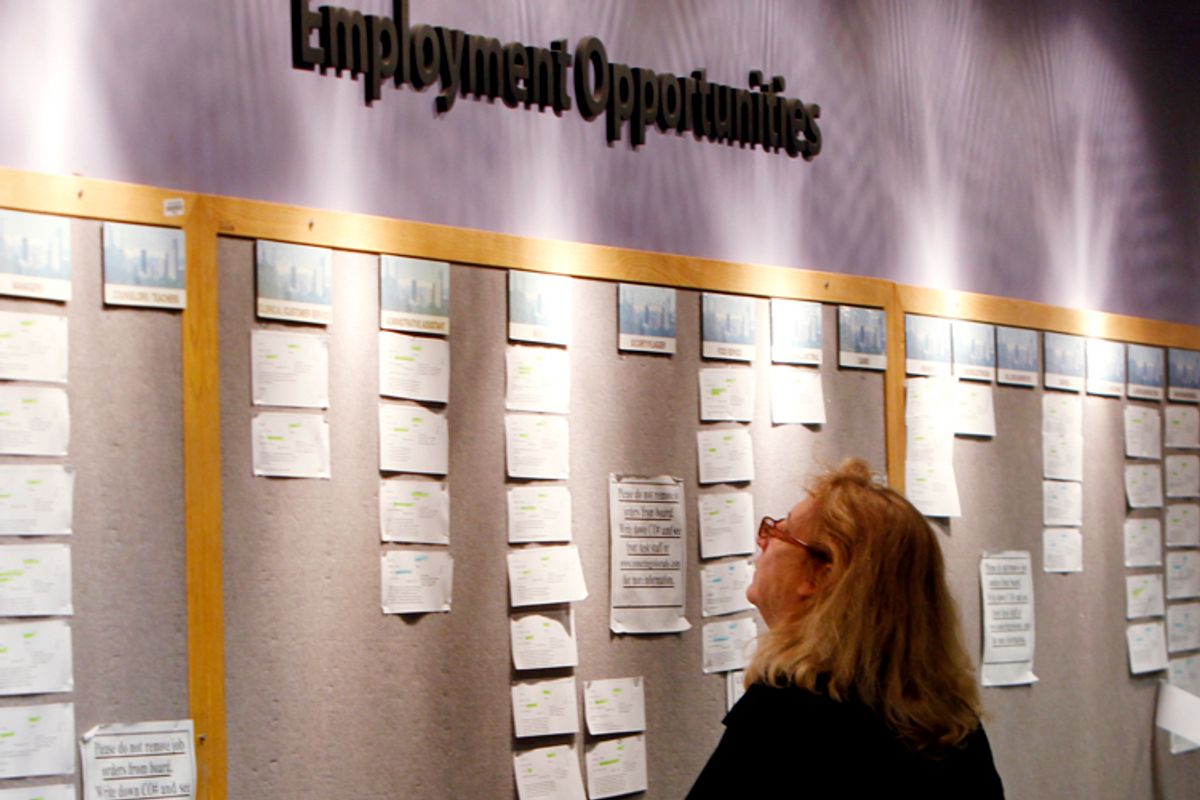 A longer version of this piece originally appeared on Lezlie Bishop's Open Salon blog. Do you have a story about being unemployed during the Great Recession? Blog about it on Open Salon -- and we might publish it on Salon.

I was one of the lucky ones. A childhood friend loved to point that out to me, especially if I started to sound like I was complaining about my high-paying job. She worked just as hard as I did. She put up with just as much bullshit from The Man as I did. But, in her mind, she was entitled to a little whining. I wasn’t.

My friend believed my success was the result of things over which I had little control. Brains. Looks. Skin color. It didn't matter how hard I worked; it didn't matter how much pride I swallowed to survive the corporate cesspool. I was lucky. She was not.

My so-called luck wasn’t worth much when the Great Recession That Is Really a Depression set in. I was just as laid off as my next-door neighbor. One day I had a job, the next day I didn’t.

I had already retired from my 25-year corporate career when things started going south. Prices were skyrocketing, and my retirement money wouldn't last as long as it was supposed to. I would have to unload my beloved home of 17 years sooner rather than later. The house needed updating to be competitive in what was fast becoming a buyers’ market. I had hundreds of thousands of dollars in equity, so pulling some of that money out to remodel made all the sense in the world.

Until it didn’t. I had already completed the refinance and the remodel when I became uncomfortably aware of the softening of the housing market. By the time I was able to complete a sale, it was a short sale that took me 18 months to cajole the bank into accepting. I had lost all my equity, of course. My retirement plan was in shambles, just like my nerves.

I had also taken a full-time job making less than half of what I had been earning before retirement. The small sales training company foundered when its corporate clients began slashing training budgets. The paycheck that had allowed me to make my mortgage payments without dipping into my 401K vanished overnight. I begged the employer to give me the proper paperwork so I could collect unemployment benefits.

As I searched for paid employment, it soon became clear my full-time job had become doing battle with my mortgage lender. I was ashamed of having to go, in person, to the unemployment office and wait for hours to apply for UI. No matter how many people told me there was nothing to be ashamed of, I still was. This was my first dance with “government handouts.” I had never received any kind of government aid and I was raised to believe that was something I could be very proud of. I felt foolish. I felt like a failure. And I was so ashamed.

But I realize that, when I look at the larger picture, I am still lucky. Throughout the recession, I have never had to worry about my next meal or my next month’s rent. Yes, it's now rent instead of a mortgage, which at one time would have been a devastating step down for me. I can get by on a small pension and Social Security, plus the small amount I have left in my severely depleted retirement account. The lights are on, the heat is on, and the dog is still a pampered diva.

I feel a strange sense of relief that I am no longer collecting unemployment because my benefits ran out. And that luck, for which I have been so envied, did send my way a six-month writing contract that added welcome new funds.

I don't search for a job anymore. At 67, I feel guilty taking a position from someone who needs it more than I do.  My life has changed dramatically and permanently, but it is not a bad life at all.

One thing I have learned for sure: Unemployment is just as much a state of mind as it is a fiscal reality. It does something horrible to a person’s self-esteem. It has absolutely nothing to do with poor work habits or contentment with government handouts. It sucks. I would tell you to ask my next-door neighbor if you don’t believe me, but you can’t. He committed suicide a year ago.