The Syrian Army's campaign of terror

When we returned to the site of a protest, the military had already been there -- and committed mass murder 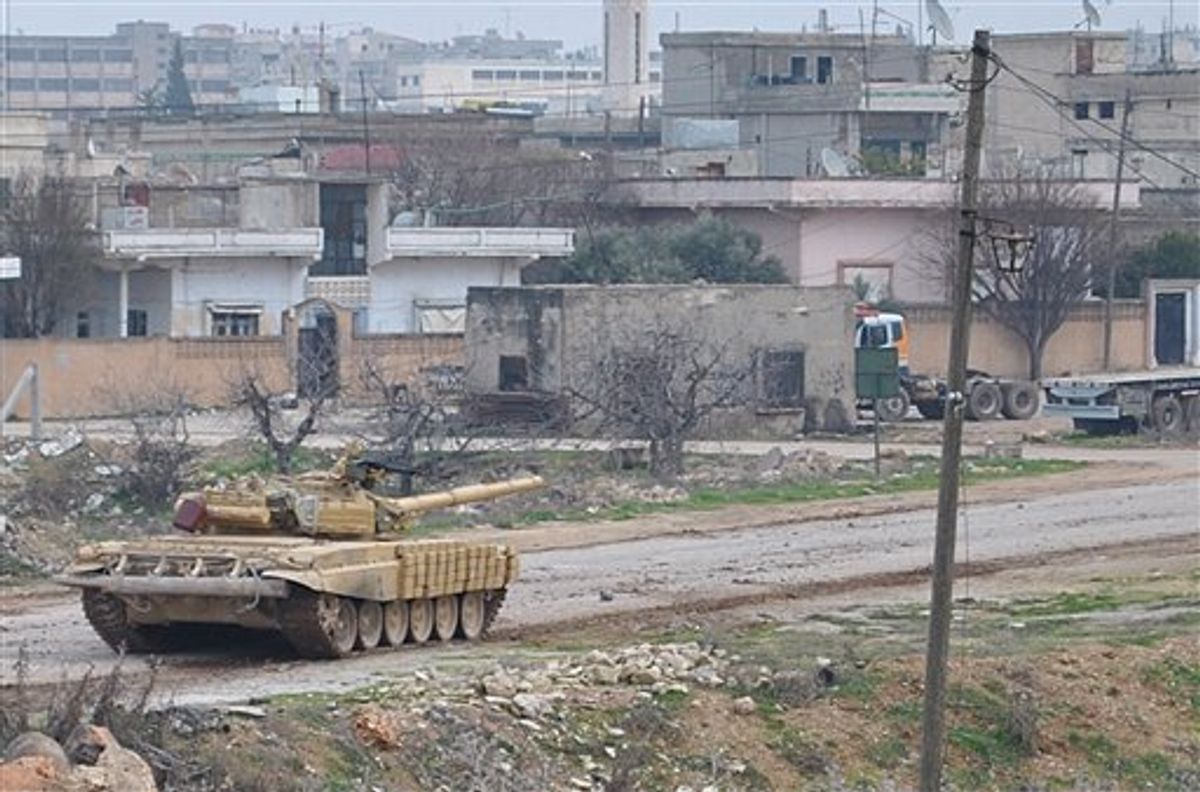 A Syrian forces tank moves along a road during clashes with the Syrian army defectors, in the Rastan area in Homs province, central Syria, on Monday Jan. 30, 2012. (AP)
--

This article originally appeared on GlobalPost. It was written and reported by a GlobalPost correspondent in Damascus, whose name has been withheld for security reasons.

SAQBA, Syria — When a team of foreign journalists entered the eastern Damascus suburb of Saqba last Friday, they were greeted by a sight that did not bode well for the Syrian regime.

Rebel fighters from the so-called Free Syrian Army were protecting about 5,000 demonstrators calling for the fall of President Bashar al-Assad. One was hoisted onto the shoulders of the protesters. Victory, it seemed, was approaching. Several other neighborhoods nearby saw rebels set up checkpoints and essentially take control.

Four days later, however, GlobalPost returned to the area and encountered a very different scene.

The Syrian army had returned.

Turning off the Damascus highway east of the city, we were stopped by several soldiers manning a checkpoint of sorts. Our driver said we were foreign journalists. He looked in and waved us on. The same incident happened twice more. The soldiers had a yellow plastic ribbon tied to their jackets that clearly indicated they were on the side of the regime.

There was little sign of life other than a line of people waiting for bread outside a bakery. Parked next to them were an ambulance, a military jeep and an armored vehicle. Two men stared with open mouths as a truck laden with gas canisters entered the area, surprised they would now finally have gas with which to cook.

We continued on in search of Municipal square, where the anti-regime protesters had gathered with such hope only days before.

When we arrived, we found a scene of devastation. Whole sides of homes had caved in, exposing the everyday household items inside. An electricity pole was smashed in half close to the ground, splinters standing vertical high into the air. Only a tank shell could have caused such damage. Local men held up large shell casings for us to see.

"They arrived Saturday and blew us away. There were Hezbollah soldiers with them," said one man, when asked about the nationality of the soldiers. He said he knew this because he recognized their accents.

We were taken to a mosque just off the square. A gaping hole had been blasted in the side of the mosque's minaret. I asked if the rebels had been inside.

"There was no one there — if they [the rebels] were inside they would have been at the top," said one man. The hole was about halfway down the minaret.

A man carrying a bag of fruit whistled to get my attention and gestured for me to follow him. I hesitated, more concerned with the crowds of men gathering around us. I warned them to disperse. Military vehicles were close by. Machine-gun fire crackled in the distance. It was cold. Several angry men asked if we were from Russia, one of a dwindling number of countries that still supports the Assad government.

The streets were almost empty. A carpet of glass, rubble and metal covered the wet concrete. Fear gripped me — the area was clearly under government control once more, and there may have been snipers looking out for any remnants of the rebels.

We walked briskly, one by one, down a side street and through narrow passages dividing houses. We came to a clearing and the man with us called to another now close by.

"Do you have the keys?" he asked the second man. He then opened a large metal door that appeared to me to be the entrance to a hospital. It was, in fact, a school, long closed down. In the corner were a half dozen pine trees. Under them was an uneven lump on the ground, covered in plastic. Another man joined us and began to peel back the plastic sheeting.

It was difficult to look at the disfigured, swollen faces. One body had its eyes missing. Another was blackened.

"They killed him as he was lighting a fire in his house. Then they threw him into it," said one of our guides.

"There are six men here, they were all killed in the last few days," said another.

"We are hiding them here so that we can bury them ourselves. If we go to a hospital [the security] will take them and we won't even get a burial. They already took one body," he added, anger deep in his voice.

There was no real smell — it was too cold. Their hands were bound, as is tradition with the dead here in order to avoid the effect of rigger mortis. Photos were taken and questions asked. There were several other sites where locals were holding their dead relatives in a state of limbo, they said.

"People are burying their dead under their houses — there is nowhere else to take them," said one man. After about 10 minutes we left the communal grave. If the army or security found us we were likely to be shot too. We were now witnesses to the regime's death squads.

We headed back in the direction of the square and our waiting car. On the way we walked over glass and mangled metal, shops without window fronts, televisions exposed to the rain. There were no people in these destroyed homes.

We jumped back into the car where our driver was waiting for us.

"Who will pay for all of this?" asked a young man passing by in his car, pointing at the destroyed buildings around us. "We will pay. I hate the Free Army — they brought death and destruction to our homes.”

"When the army comes and they see people on the streets with guns and shooting of course they will try to kill them. They think this is their job," he added.

Through the square, a government convoy rolled by, made up of multi-purpose vehicles painted blue to give the impression they were police, as opposed to military. In a 32-seater bus sat dozens of soldiers, guns sitting on their laps. The young man crouched next to the car out of their view.

On the way out of the town, I spotted the green of the free Syria flag painted on a wall. We stopped at each checkpoint, and at one a soldier opened the glove compartment of the car. But he let us go. The soldier guarding the next checkpoint was Alawite, said our driver, able to tell from his accent. Alawite is a minority Shiite sect in Syria to which the ruling elites belong.

"Come over here and see what the fighters did here," the Alawite soldier urged us. We declined, keen to get out of this fresh and bloody war zone. The bizarreness of returning to the center of Damascus, where life continued in apparent normalcy, was astounding.

The men I met in Saqba were not freedom fighters, and they were not political. But the death and violence brought on by Syria's now civil conflict have tied them up in a struggle between life and death. For them to even be seen talking to journalists would in all likelihood lead them to a tortuous end. The other districts east of the capital, which were celebrated as new centers free from Assad last week, have also now fallen.

With the withdrawal of the Arab League monitors and most foreign journalists, Syrians are again on their own. Tanks and checkpoints have returned to several other towns around the capital. Locals fear the army is gearing up for more assaults, something it can now do uninterrupted and out of sight.