The way to curb police abuse

As the NYPD finds itself mired in yet another controversy, we look at how other big cities control corruption 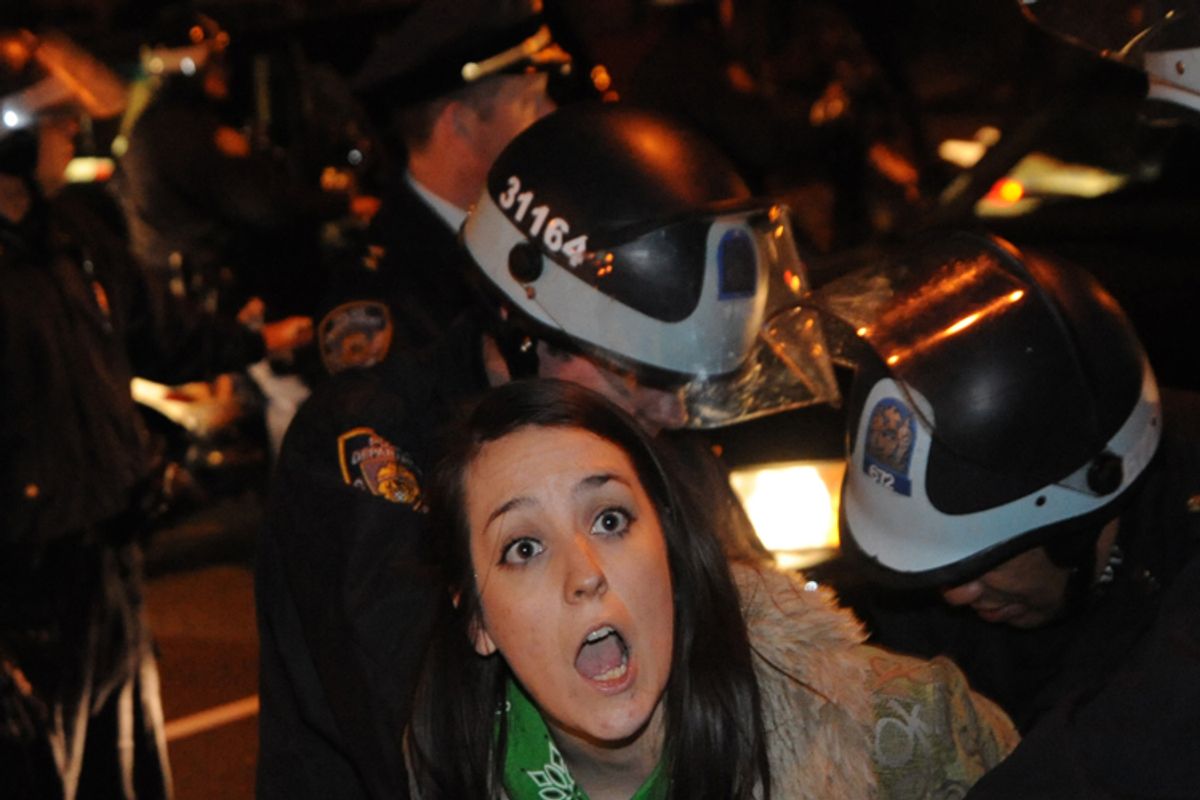 This article originally appeared on MetroFocus.

The NYPD is mired in yet another scandal this week — one of many in the last 12 months — over Commissioner Ray Kelly’s participation in a controversial police training video.

Some politicians and policy analysts are calling for a new independent agency to oversee the NYPD — something Mayor Michael Bloomberg says the city won’t do.

MetroFocus looked at the problems with the NYPD’s current monitoring system and, for comparison, at how other cities have used independent government watchdogs to reduce corruption.

A Troubled Run for the NYPD

The most recent scandal emerged last week, when NYPD Deputy Commissioner Paul Browne admitted that Kelly had participated in the filming of the highly controversial police training movie, “The Third Jihad” — a claim Browne had denied just a day before.

In response to the controversy, Bloomberg said the NYPD used “terrible judgment” in showing the video to 1,500 officers.

The revelation prompted New York City Councilmember Brad Lander (D-Brooklyn) to release a statement in which he demanded for the NYPD “a new set of accountability mechanisms that balance our need for security, appropriate confidentiality in criminal investigations, respect for civil liberties, and telling the truth.”

Two days later, two lawyers for the Brennan Center for Justice at the NYU School of Law wrote an op-ed in the New York Times calling for a new inspector general’s office to oversee the NYPD.

Public discontent with the NYPD’s practices seems to have reached its fever pitch with the “Third Jihad” episode, as New Yorkers emerge from a year already fraught with NYPD scandals, including:

The idea that the NYPD has been militarized and turned into Bloomberg’s “own army” in the years since 9/11 was widely discussed in the press last year. The Brennan Center op-ed suggests that many of the aforementioned scandals are partially the result of that transformation, and the veil of secrecy that comes with it. The writers of the op-ed lay out the problems they see with the department’s current self-monitoring system:

Lander, who is currently fleshing out his proposal with the help of the Brennan Center, said he wants the new inspector general to be an “internal person, but somebody appointed by the mayor… who has access to confidential information who keeps that information confidential,” and reports to the Department of Investigations or the Council, reported Capital New York.

Richard Aborn, president of the Citizens Crime Commission of New York City, has been thinking a great deal recently about what an independent agency might look like. At the end of last year, his criminal justice nonprofit published a report detailing the way police oversight agencies operate in America’s five largest cities.

Aborn agreed with Lander that a new oversight agency should be transparent and independent, but added that it would need to have “real subpoena power” and “a budget that can’t be reduced by City Council or the mayor.” Aborn, like Lander, said the oversight officer could be an inspector general, but one that “reports to some kind of board.”

However, Bloomberg’s administration has historically resisted outside oversight of the police, which Aborn attributes to two main factors. The first is a desire to save face. ”I think in some ways they resist because it ends up becoming personalized. It’s an admission that things are bad,” said Aborn.

The NYPD did not respond to a request for comment as of press time.

Independent Oversight Across the Nation

The Citizens Crime Commission’s report found that after New York, the nation’s largest city,  four of the five largest cities had some form of independent police oversight agency with subpoena power. But if one looks a bit deeper into the history and effectiveness of three of these agencies — Philadelphia, Chicago and Los Angeles — it becomes clear why Aborn stresses New York’s need for transparency, financial independence and a board to which the oversight agency would report.

Philadelphia: For a while, Philadelphia had an independent oversight agency that met all three of Aborn’s recommendations.

In 1996, after the ACLU filed a lawsuit against the city over a major police corruption scandal, a Philadelphia district court mandated that the city send quarterly reports on police misconduct to the ACLU, NAACP and the Police Barrio Relations Project, reported the Philadelphia City Paper.

The city responded by creating the Integrity and Accountability Office, a well staffed and independent oversight body with the power of subpoena, which was supposed to issue annual public reports on cases it had received and investigated. The agency appeared highly effective in pushing the police department to police itself.  In 2001 alone, the Philadelphia Police Department’s Internal Affairs Unit investigated 354 allegations of police misconduct — 227 more than it had in the first year of the Integrity and Accountability Office’s existence.

Then, in 2003, the court mandate expired, and the Integrity and Accountability Office seems to have lost its way. It has not published a report since 2004, which supports Aborn’s argument that an oversight agency should be required to report its findings to a board, and that its work be transparent.

“There has been backsliding generally,” David Rudovsky, an attorney with represented the ACLU in the original 1996 case, told City Paper.

Philadelphia has another independent oversight agency, the Police Advisory Commission — created in 1994 — but it has held very few public hearings since its inception. The City Paper called the commission a “largely ineffectual body.”

Chicago: The Chicago Reader reported that the city’s independent oversight agency was not quite as independent as many people originally thought, and suffered for it.

In 2007, Chicago Mayor Richard Daley created the Independent Police Review Authority, an independent city agency with 53 investigators that explores allegations of police corruption with set timelines for completing its cases. The Authority has made allegations of police misconduct significantly more transparent — and far more so than any NYPD oversight agency — by publishing all reports online, and continues to do so.

Many of Chicago’s criminal justice activists and attorneys claim the agency failed to live up to its promise of cleaning the city’s police department because it lacks independence. Some claim that it was underfunded in the first place, and many say it was weakened by the mayor and City Council’s ability to fire its chief administrator, reported the Chicago Reader.

And Then There’s Los Angeles, Where the Feds Had to Step In

The Citizens Crime Commission report also listed Los Angeles in its list of major cities with an independent oversight agency equipped with subpoena power. In 2000, the city created a new inspector general’s office to oversee the department in response to the explosive Rampart scandal in the late 1990s. During that scandal, the LAPD division covering the gang-stricken Rampart neighborhood was found to be wildly corrupt, which many Los Angeles residents had suspected since 1991, when a video showed LAPD officers beating Rodney Kingsparked city-wide riots.

But Los Angeles’ story is in many ways more complex than that of other cities, because in 2001 — also in response to the Rampart Scandal — the U.S. Justice Department entered into what is called a consent decree with the city of Los Angeles, requiring a federal monitor to oversee the LAPD. Such an action is very rare, but happened just this week in Oakland, and another consent decree is expected in New Orleans.

By most accounts — including this intensive 2009 study by Harvard University — the inspector general and federal monitor were highly successful in reducing corruption and improving relations between minority groups and the police. Forty-five members of the LAPD’s Rampart division were fired. Between 2005 and 2009, for example, the Harvard study reported an 11 percent increase in the number of ethnic minority residents who believed the police had treated them with fairness.

In July 2009, a federal judge decided the LAPD had reformed, and terminated the consent decree, although the ACLU strongly condemned the decision.

Could the Justice Department Bring a Monitor to the NYPD?

It’s tried to. In 1997, the Department of Justice investigated the NYPD, finding widespread corruption and lack of oversight. In 2000, a year after the shooting death of Amadou Diallo, New York City Mayor Rudy Giulliani reversed his original position on federal oversight and said he was ready to allow the Justice Department to install a federal monitor. It didn’t happen.

In early 2011, the Weekly Standard reported that the Department of Justice had completed a behind the scenes meeting with a group of criminal justice advocates about the NYPD’s surveillance of ethnic minorities. Last week, the C.I.A. agreed to pull its embedded agent from the NYPD after conducting a highly publicized internal investigation.

It was a small victory for oversight advocates, but the NYPD’s long history of resisting the creation of an independent oversight agency or a federal monitor leaves many questions about the possibility for real reform unanswered.