When a candidate bets against the economy

“He made things worse!” is a much easier sell than “They could be better!” 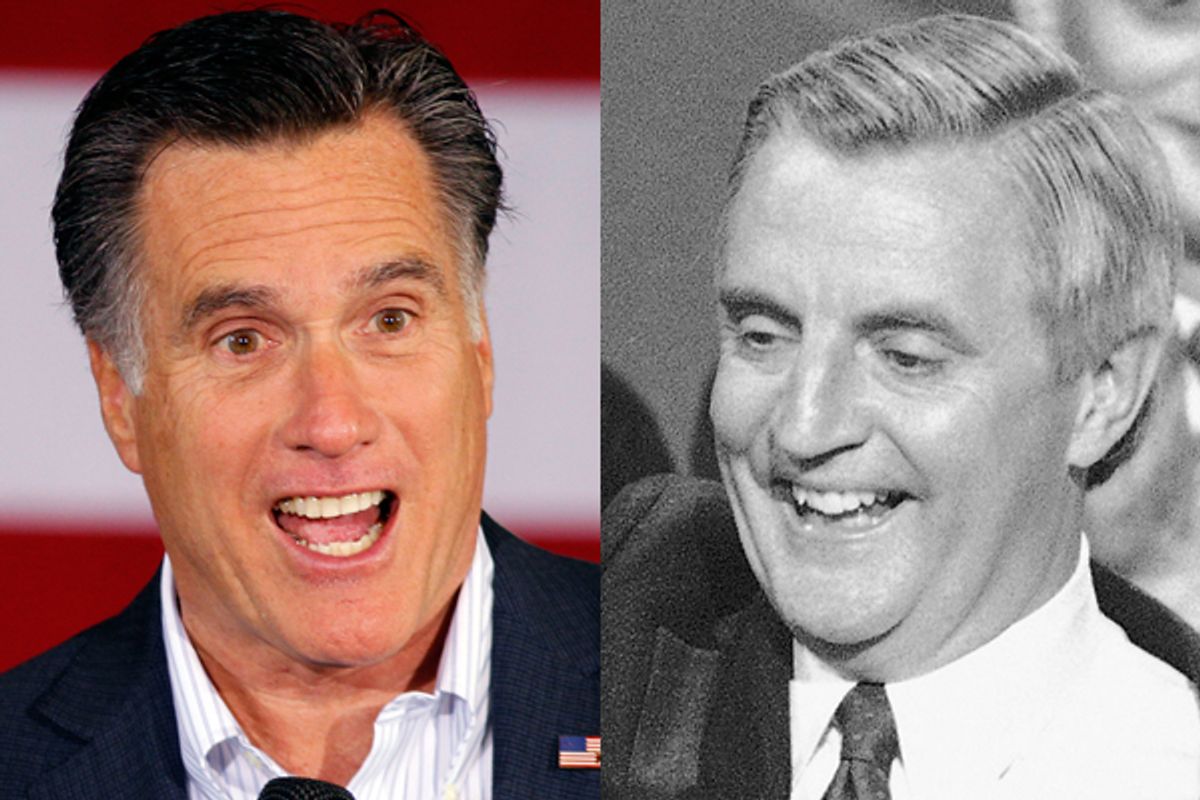 As he positions himself for a likely general election battle with President Obama, Mitt Romney is pursuing a strategy that's rooted in a basic, well-established political reality: When economic anxiety is high and swing voters don't see any relief in sight, they're generally very open to whatever argument the opposition party makes against the incumbent president's policies. This is why Romney really doesn't have much of substance to say. You pick the issue, and his message boils down to, "Well yes, that's a huge problem -- and it hasn't gotten better since Obama took office."

Just take his interview Thursday night with the Las Vegas Sun's Jon Ralston, who tried to elicit a specific plan from Romney to address the housing crisis, which is worse in Nevada than anywhere else in the country. Romney simply replied that "the best thing we can do to help people whose homes are underwater and are looking at foreclosure is to get the economy going again" and then ticked off some statistics about how bad the economy is. Ralston eventually cut him off, resulting in this exchange:

RALSTON: But what does accomplish something for these people here, governor? I’m sorry to interrupt you, but these people are watching and they’re saying, "How if Mitt Romney becomes president will he help me with my problem? I’m underwater on my home, I can’t get the bank to negotiate anything with me." And essentially your comment seems to indicate, "Oh, you’ll be fine. Let the foreclosure process go. You might get kicked out of your house. I can’t do anything about it."

ROMNEY: Well, how’s it worked under President Obama? He’s been president three years. How’s it worked with him? What he’s done is he’s made things worse. You’ve got people in this country that continue to see housing values decline, foreclosures on the rise, median income is declining. My course is getting the economy going, getting people back to work again.

It's a simple game plan: Take whatever issue is on the table, connect it to the economy, and blame Obama for not fixing it. Rinse and repeat. Another good demonstration came in a recent Twitter spat between Obama strategist David Axelrod and Romney adviser Eric Fehrnstrom, who stated over and over that 1.7 million jobs had been lost under Obama while ignoring Axelrod's attempts to put the numbers in context. Jonathan Chait captured the significance of the exchange:

Obama doesn’t have a simple and straightforward reply. His complicated answer is reflected in Axelrod’s argumentation: The crisis began under Bush, the direction of the economy has improved dramatically since, and Republicans want to return to the Bush’s administration’s policies. Fehrnstrom’s reply to all this is to keep pointing, over and over, to the fact that things are bad. It’s your fault, it’s your fault, it’s your fault. That’s the argument Romney will drive home until November, and that argument usually prevails when an incumbent president is presiding over a bad economy.

But if the president is presiding over an economy that voters believe is improving, the magic vanishes. Which explains the awkwardness the Romney campaign faced this morning, when the most encouraging jobs report of Obama's presidency was released. With a net increase of 243,000 jobs in January, the unemployment rate is now down to 8.3 percent, marking the fifth straight month it fell and bringing it to its lowest level since Obama's first full month in office.

Faced with such obviously good economic news, the Romney team took its time responding, first churning out a press release on an unrelated topic ("President Obama's attack on religious liberty") then finally putting out a statement that read in part: "We welcome the fact that jobs were created and unemployment declined. Unfortunately, these numbers cannot hide the fact that President Obama's policies have prevented a true economic recovery. We can do better." A series of negative economic statistics then followed.

Besides the acknowledgement that "jobs were created," the statement was no different than anything Romney has been saying for the entire campaign. But juxtaposed against the big news of the morning, it read as petty, and almost absurdly comical. If -- and, to be clear, it's a very big if -- the good economic news continues in the months ahead, Romney's rhetoric will only fall flatter.

That's why today's news raises the possibility that Romney could end up as another Walter Mondale, whose 1984 campaign epitaph reads: "Too bad the election wasn't 18 months earlier." When Mondale set out to run after the 1982 midterms, unemployment was surging to over 10 percent, Reagan's job approval rating was falling under 40 percent, and trial heats showed the former vice president substantially ahead of the incumbent. But by this same point in 1984, the jobless rate was falling (the January '84 jobs report put it at eight percent, the fifth straight month of decline) and Reagan's approvals were quickly rebounding. By November, unemployment was at 7.1 percent and Reagan won his 49-state landslide.

Granted, if Romney does lose, the margin won't be that bad. And, again, the current recovery is a tenuous one -- by the summer, we may look back at today's news as a mirage. If that's the case, then Romney's substance-free Obama-blaming will probably work just fine. But if not, well, "Things could be better!" just doesn't have the same ring as "He made them worse!"