As the pop icon prepares to play the Super Bowl, a celebration of the way she changed sexual mores forever 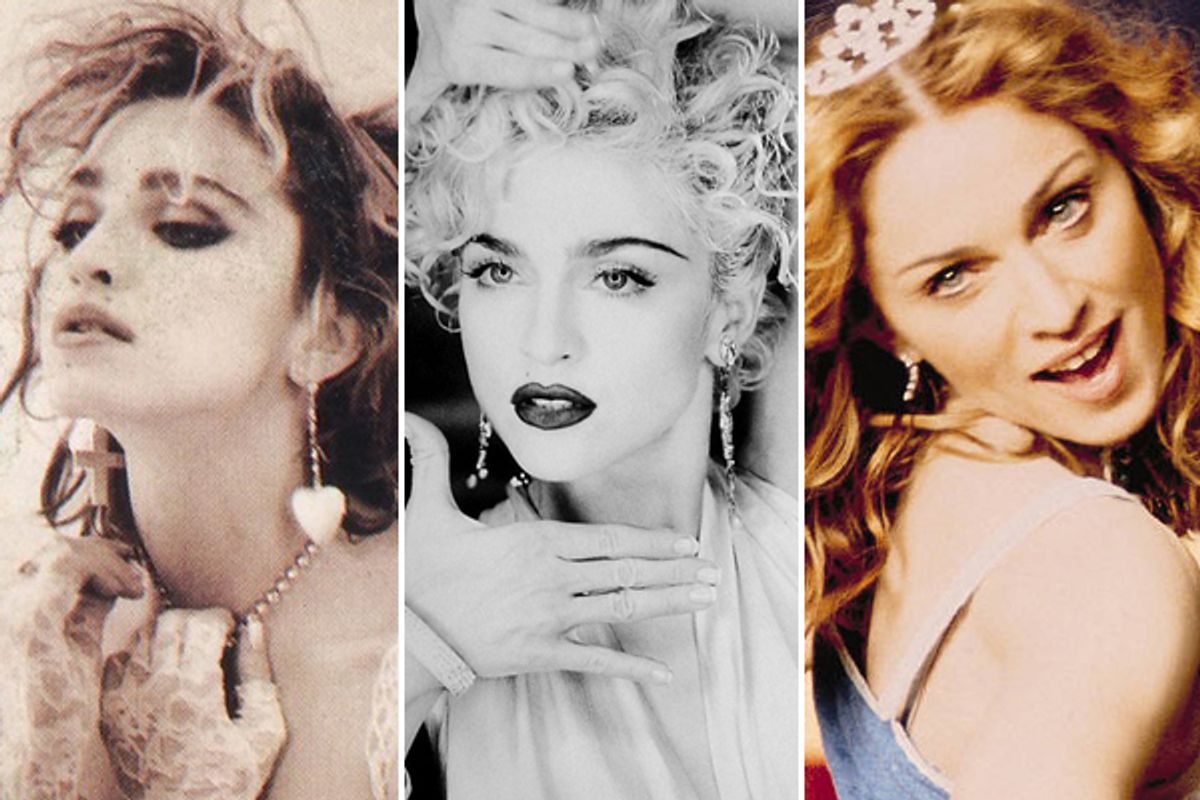 When Madonna takes the stage at halftime of the Super Bowl this Sunday, she’ll be the first female solo performer to do so since Janet Jackson and Justin Timberlake played peek-a-boo in 2004. Ever since Nipplegate, Super Bowl programmers have avowedly played it safe, booking a string of hoary grown-man rockers such as Paul McCartney and The Boss, known quantities not prone to random disrobing.

By and large, the halftime show has become the live-performance equivalent of the Rock and Roll Hall of Fame, an honor bestowed long after an artist’s peak. So Madonna, once the baddest good girl or best bad girl in pop, is now safe prime-time fare? No shocker there. But even if Madonna hasn’t had a mega-hit since Justin Bieber was in diapers, that’s far from the point. Madge will be bringing two other fabulous Ms. M’s — Minaj and M.I.A. — onstage with her, which is exciting, but that’s not the point either.

No, the point is that this Sunday will be an opportunity to celebrate the changes Madonna brought to American culture at the height of her career. Her visionary assault on American prudery, her revelatory spreading of sexual liberation to Middle America, changed this country for the better. And that’s not old news; we’re still living it.

If this sounds elementary to speak of now, it’s only because we’ve spent so long in the world Madonna made that we can hardly imagine it any other way. But throughout the 1980s and into the ’90s, her protean personae and erotic gambits were consistently a step ahead of what Middle America was ready for. She dared us to catch up with her. Remember, she (and the fans who fell in love with her in second grade, ahem) came of age in an era when a U.S. president could reasonably believe that he could confess to having committed adultery in his heart — not in an open marriage or on the Appalachian trail, folks  —without sounding utterly ridiculous.

In the early ’80s, when the Material Girl owned the dance floor at Manhattan nightclubs and reveled in the downtown scene’s polysexual utopia, the political advances of feminism and gay liberation had stalled out and were hurtling toward backlashville. By the end of that decade, when gay rights laws were being repealed in cities across the country, Madonna was bringing the ball culture of gay and transgender blacks and Latinos — the true voguers — to junior high school gymnasium dances worldwide, popularizing an ecstatic ethos of freedom, sexual and otherwise, sprung directly from big-city club scenes that millions of suburban kids might never get to experience firsthand.

In an era when photographers and performance artists were being blasted in the halls of Congress and the courts of public opinion for using religious iconography or homoerotic images or referring to self-gratification, Madonna hit upon danceably glamorous versions of all of these things. She managed to smuggle the values of the sexually fluid, multiracial art underground into the dead center of American culture before the old-school guardians of moral rectitude could gather their forces to protest.

So what if Madonna has been a garden-variety celebrity since then, balancing slight nuttiness (Kabbalah, hydrangeas) with backward-glancing stunts (Britney) amid a backdrop of mostly unexceptional music and the odd cinematic triumph ("Evita") or flop ("W.E.")? The woman remade American culture. And that’s more than enough to justify my love for her.

Sara Marcus Sara Marcus is the author of Girls to the Front: The True Story of the Riot Grrrl Revolution." Follow her on Twitter: @thesaramarcus.