Swimming with the stars 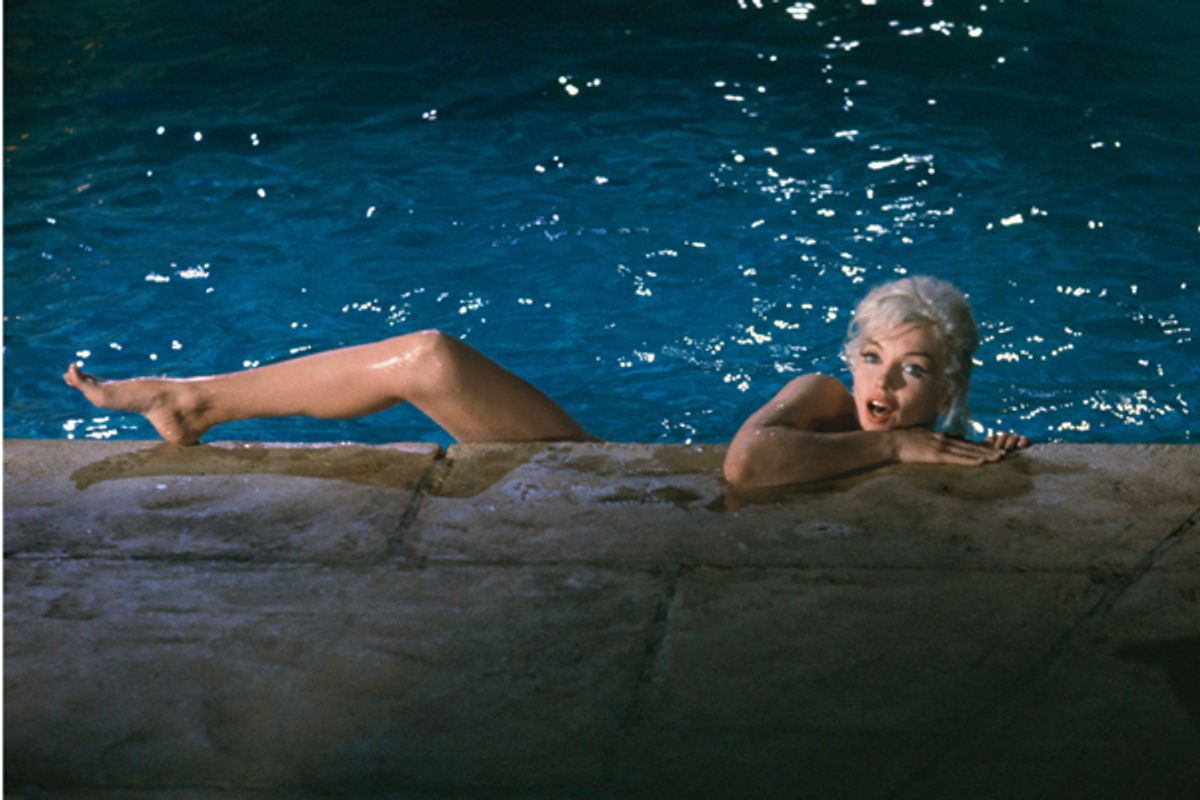 By turns playful, suggestive and bewitching, the photographs in a new show at the Palm Springs Art Museum propel us back through the decades, to a time when the glamour of choreographed capitalist displays had a singular hold over the American imagination.

These images, though diverse in many respects, all have one thing in common: the swimming pool. That, and their mid-to-late 20th-century Southern California backdrop.

The exhibition is part of  "Pacific Standard Time," a multi-institutional project devoted telling the story "of the birth of the Los Angeles art scene and how it became a major new force in the art world," sponsored by the Getty Research Institute. Over the phone, curator Daniell Cornell explained the place of the swimming pool in Southern California's cultural history, and discussed the show's principal themes -- from architecture and suburban idealism to the cult of the Hollywood celebrity. Click through the following slide show for a sun-soaked trip back in time.

Had you considered doing a swimming-pool themed photography exhibition before "Pacific Standard Time"?

I'd been thinking for a long time, actually -- ever since graduate school -- about trying to do an exhibition that investigated a theoretical concept: the notion that a place is both a real, topographic entity and an ideological construct ... It's just an idea I've been wanting to explore. When the opportunity came to apply for a grant to do an exhibition as part of this larger project looking at art in Southern California, I realized that it was the perfect opportunity to begin to explore that idea.

When I started thinking about it ... I realized that in many ways, in the post-war period, Southern California was the ideal of what the American dream was going to look like. At the center of that was the swimming pool, and suburban expansion, and the concept of everybody living in this place that didn't have the danger of nature, but had all the benefits of the natural landscape. A place that was away from the city, but at the same time felt domesticated. I started thinking about the pool as the central icon of that both real and imaginary place. And it grew from there.

What do swimming pools say about Southern California in particular (that they don't say, for instance, abut other parts of the country, such as the Midwest or New England)?

Well, in the immediate postwar period of the '40s, '50s and even '60s, there weren't that many swimming pools elsewhere. Maybe in Florida, which had a similar kind of expansion at that time. But Southern California was growing very rapidly in terms of suburbia in that period, and that expansion included houses that incorporated swimming pools. I grew up in the '60s and '70s in Seattle, and I envied Southern California -- because in Seattle, in the summer, we would drag out our above-ground swimming pools and set them up and pretend that we lived the same kind of life that I imagined people in Southern California lived all the time. Thinking about kids my age in the '70s growing up with swimming pools in their backyard and having this kind of experience as the norm for their life -- that was a very seductive sensibility. I don't think that that was unusual, when you look at how much Hollywood promoted itself and Southern California as an ideal for the country. You pretty much see it everywhere.

Two themes that seem immediately apparent in many of these images are architecture -- that is, the houses or buildings we often see beside the pools -- and sex.

The exhibition is divided into thematic groups. It does start with California architecture and design, because swimming pools were at the center of the way that mid-century architects here in Southern California were thinking about modern architecture. The pool created a very porous experience between indoor living and outdoor entertaining. These were houses literally built for entertaining, and the movement from the inside to the outside was part of how Southern California architecture was developed ... The pool really allowed for fluid movement between those spaces. So architecture and design is certainly at the beginning of the way that you would want to think about pools, in the period from 1945 to 1982 in general, in Southern California.

In addition, this is a period in which ... culture was creating an image for the Hollywood celebrity that was built around the pool. You see all of these images of Hollywood celebrities -- supposedly just casual, unscripted moments. [But] none of those photographs are meant to do anything except promote the persona of the celebrity. They give you this impression that what you're seeing is the "real" celebrity, when in fact you're seeing the carefully narrated Hollywood persona that that celebrity is based on.

[Another section of the show focuses on] suburbia, and how much the private, backyard pool (as opposed to the public pool) was at the center of suburban life. There were some public pools in suburbia, but the ideal was a private, protected space; especially in the '50s, it had very much to do with this notion that we Americans had a private experience -- as opposed to the communal experience of the Soviet countries. When you look at what people circulated in terms of photographs, and even what they said about their own experience, it almost always revolved around things that they were doing in the backyard. If they were lucky enough, it revolved around a pool in the backyard. And as you say, because of the very nature of the fact that, when you're around a pool, you're wearing a swimsuit, it becomes an opportunity for the body to be on display.

[The final section of the exhibition is a conceptual one.] I wanted this show to be not just about these social topics, but also about what was happening in photography during the period. 1945 is a high modernist moment in photography, and the earliest photograph in the show is by Ruth Bernhard, who emigrated from Germany to escape the Nazis. She went first to New York and then to Southern California, and her images represent all of the things that you would expect in a high modernist photograph: ... even though it's representative, there's a very abstract organization of the forms and the shapes in the image, because it's done through high contrasts of light and dark.

As you move through the period, you get photography really blurring the boundary between popular culture and high culture, because photographs circulate in commercial advertising; they circulate in journalistic reporting; they exist in lifestyle magazines as well as in professional trade journals ... all of those things in addition to showing up as fine art in museums.

Then, in the 1980s -- that's when photography goes big; that's when Cindy Sherman's photographs go up on the wall large, and Barbara Kruger's imagery goes up big, and David Hockney first takes his smaller Polaroid images and montages them together into something large enough that it can go up on the wall and challenge painting as the dominant mode in contemporary art practice. You see this shift from a very high modernist fine art practice to color photography that we recognize as a part of postmodern contemporary art. That really literally happens from 1945 to 1982, so it spans the dates of this show. The conceptual section really shows you how photography used the pool, not as a subject, but as an opportunity to explore all kinds of developments in photography as an aesthetic mode itself.

The exhibition features several works by David Hockney -- and several that were inspired by him (or even actually incorporate him [slide 10]). Can you talk a little about his art and influence?

[The Hockney photo in your slide show,] "John St. Clair Swimming," [slide 9] is actually very small. It's typical of a series of images he took; he used photography in the way that other artists might use a sketch or a prefatory painting: as a way to think about his compositions. That image of John St. Clair swimming became source material for a later famous painting by Hockney that is actually set in Italy. But that particular image [was taken in California].

When I decided to do this exhibition, I knew it had to have Hockney, because if you say "the swimming pool in Southern California," the first thing that comes to almost everybody's mind is Hockney. It's ironic, though -- I don't think most people know that he only painted 15 paintings of swimming pools. They loom so large, because they circulated so widely through reproductions and in the popular imagination that people think he must have painted dozens of them. But he only did 15.

"Backyard Oasis: The Swimming Pool in Southern California Photography, 1945-1982" is on display at the Palm Springs Art Museum in Palm Springs, Calif., through May 27, 2012.