The ugly Nevada result is bad enough, but the former House speaker may be losing his sugar daddy too 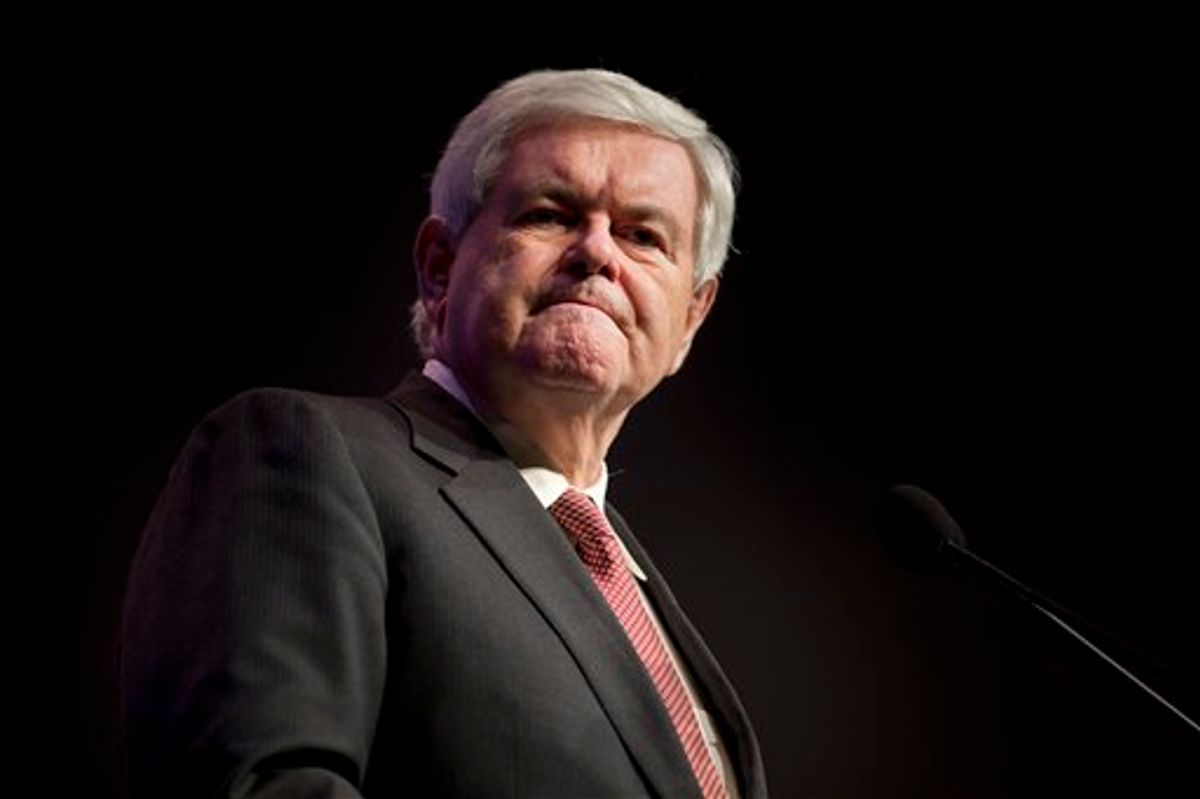 There was never any real suspense over which candidate would win the Nevada Republican caucuses. Mitt Romney racked up a landslide win in the state four years ago, and he wasn't even the GOP front-runner back then. The state is demographically suited to him -- about a quarter of the GOP caucus electorate is Mormon, and Mormons have been supporting Romney's campaign at roughly a 90 percent clip -- and he's put far more effort into it than any other candidate, except Ron Paul.

So for Newt Gingrich, there's no shame per se in the fact that he was beaten by Romney on Saturday night. But that he was in danger of finishing behind Ron Paul is a problem for the former House speaker, whose main task for February -- a month littered with Mitt-friendly contests -- is to fare credibly enough to reassure voters in the Super Tuesday primaries of early March that the GOP contest is still a real two-man race between him and Romney.

The tallying of returns by the Nevada Republican Party was painfully slow (fewer than half of all precincts had been counted by midnight EST), but if Gingrich does lose out to Paul it will amplify a second Nevada story: Not only did Romney post a big, if entirely expected, victory, but Gingrich failed to meet even the modest expectations that were set for him -- a result that will validate recent media stories that suggested the Gingrich campaign is in disarray and that will surely encourage more like them. And even if he does hold on for second, it was still Romney's night.

Gingrich seems aware of how bad this all looks, and attempted to gain some control over the narrative with an unorthodox late-night press conference after the Nevada results were in. He repeated his vow to stay in the race, chalked up Romney's win to Nevada's status as a “heavily Mormon state,” talked about racking up delegates strategically, and emphasized the long game.

The idea, it seemed, was to lower the bar for the rest of February in an effort to avoid any more nights like this. Realistically, Gingrich's won't have a chance to start winning again until early and mid-March, when a number of Southern states will vote.

But two other Saturday night developments raise some very practical questions about Gingrich's durability. The first is news that his campaign is $600,000 in debt, even after several months of strong fundraising. Far more ominous is a New York Times report that Sheldon Adelson, the 78-year-old casino magnate who has directed $10 million to a pro-Gingrich Super PAC since the Iowa caucuses, now recognizes that Romney is likely to win the nomination and has signaled his willingness to ultimately back him. According to the Times:

Several people who have spoken with Mr. Adelson over the past two weeks said he would most likely continue to help the [Super PAC] as long as Mr. Gingrich remained in the race. But, they said, he is concerned that additional deep-pocketed donors have not joined him. And, they said, his affection for and loyalty to Mr. Gingrich, who met with him here on Friday, have not blinded him to the reality that the nominating contest is tilting in Mr. Romney’s favor.

The Times story indicated that Romney and his team have been intently courting Adelson behind the scenes, hoping to convince him that Romney is just as reliable as Gingrich on Adelson's top issue, Israel. (Here it may be worth recalling Romney's stern reply to a Palestinian-American questioner at a recent Republican debate, in which he channeled the pro-Likud hawkishness that animates Adelson's Middle East politics.) Ultimately, this may be the biggest story to come out of Saturday night. It's hard enough to see Gingrich bouncing back now, and if his chief patron turns off the spigot...