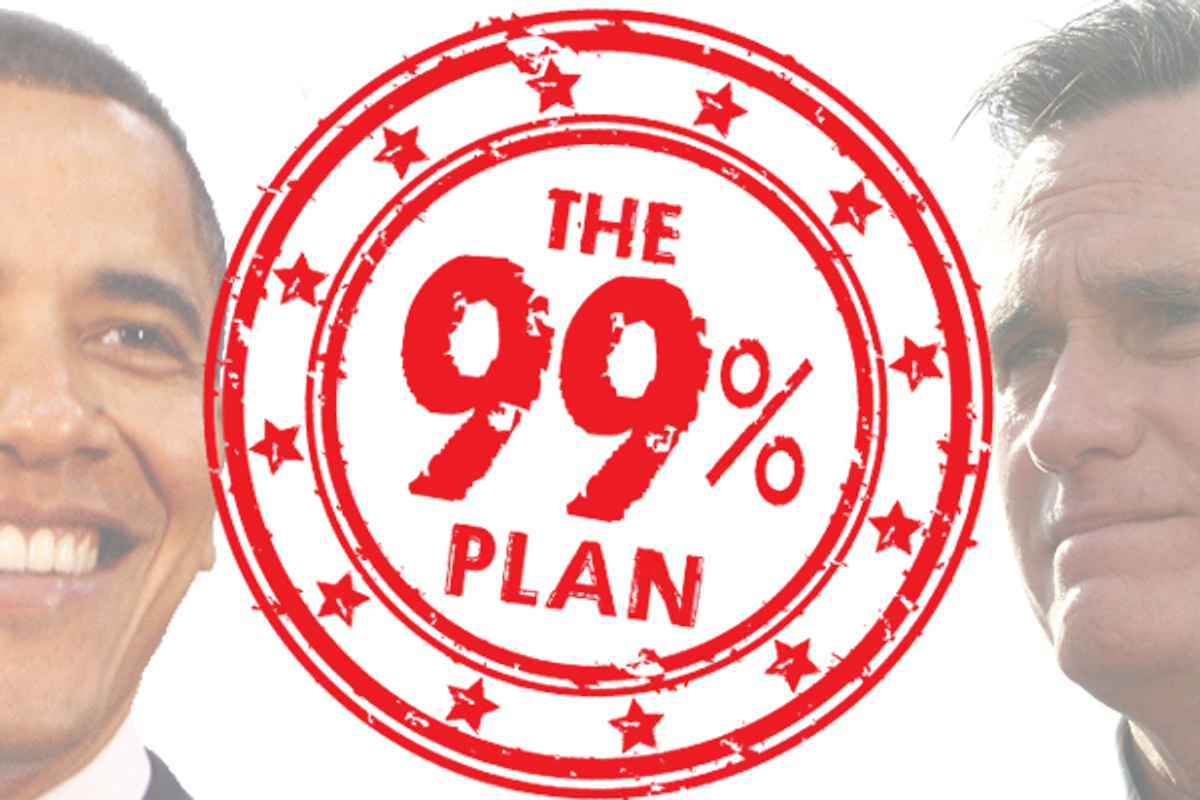 This piece introduces The 99 Percent Plan, a joint Roosevelt Institute-Salon series that explores how progressives can shape a new vision for the economy.

The 2012 presidential election is rapidly shaping up to become a critical battle for the future of the American economy. In his State of the Union address, Barack Obama attempted to draw a sharp contrast with the “you’re-on-your-own economics” on display in Republican primary debates.

But progressives have their work cut out for them. Despite a triumphant election in 2008, a financial crisis that seemingly discredited the free-market deregulatory fervor and the significant policy achievements of the Obama administration in economic stimulus, healthcare reform and financial regulation, the very notions of government regulation, of social safety nets and of economic fairness are under attack.

For too long progressives have been content to work within an economic discourse largely set by conservative principles, hostile to state action while idolizing free markets and corporate power. Indeed, the last time a sitting Democratic president launched a reelection campaign with his State of the Union address, it was Bill Clinton, who declared proudly that “the era of big government is over.”

Sixteen years and one economic meltdown later, America is facing an election that is about more than candidate personalities, or even policy platforms; it is about the war of ideas, and at stake is nothing less than our collective political and economic future. Progressives can only win this long-term battle by finally articulating a deeper and more coherent vision of progressive political economy, one that sharply contrasts with conservative ideals.

At its core, the conservative economic vision rests on a three elements. First, it views freedom as “noninterference” — we are only free to be left alone, and the state is limited to protecting basic liberties. Second, it sees individuals as equally situated such that market activities — bargains, transactions, the starting of a business — reflect each individual’s creativity, innovation, agency and merit. Finally, this vision sees markets as the most efficient way to run a society. Because markets aggregate millions of individual transactions into metrics like prices, they appear more able to incorporate a wide diversity of preferences and beliefs into a smoothly-functioning system than centralized “elite” policymakers in Washington.

These elements form the basic building blocks of conservative economic policy: a preference for free markets, willful blindness to the inequalities of opportunity that arise in a market economy, and hostility to taxes, government regulations and social safety nets.

This conservative account is compelling because it is more than just ideology. It is also a moral vision of the good society, and it tells a clear story about what went wrong and who is to blame: The fault is the government’s, and the solution is to deregulate everything from the new Consumer Financial Protection Bureau to the social safety net.

But this is not the only way to envision a modern economy — and for progressives, it is certainly not the best possible vision.

First, freedom for progressives means more than just being left alone; to really be free, we each need protections from not only the power of the state but also the power of powerful private actors like big corporations. Further, each of us needs some basic capabilities -- from healthcare, to minimal income and sustenance -- in order to experience genuine freedom. Free individuals are those who have full moral standing and the capacity to act effectively in society.

Second, the conservative view of market freedom ignores background inequalities of power and wealth. Markets are not purely arenas of equal exchange fairly earned, but instead are often domains of power and politics, where rents are extracted through regulatory arbitrage or outright fraud, and profits may be just as easily the product of exploitation or malfeasance as of innovation and merit.

Third, market freedom ignores the degree to which politics can be more than a space of corruption and ineffectiveness, and instead can serve as crucial arena for freedom and creativity as citizens engage in the project of making a more just and desirable society.

Progressives must be unabashed in their critique of the existing economy and the mistake of seeking the answer in “free markets,” by highlighting the dangers of concentrated wealth and corporate power, rampant economic inequality, and a nation with declining social mobility. These are the kinds of economic problems that demand response – and that give purpose to government itself.

Progressives must also own the project of reforming government, not to privatize or deregulate, but rather to democratize. Transparency is a start, but progressives must do more to foster citizen participation, thereby making government more responsive and accountable. Finally, progressives need to speak in a more openly moralizing language, appealing to core values of freedom and fairness in linking these values to particular policies.

This progressive vision has to rekindle a sense of empowerment, possibility and urgency among citizens themselves. Particularly in the current economic crisis, it is easy for citizens to feel disempowered, buffeted by titanic forces beyond their control, faced with a political system they cannot trust, engage or reform. Under these conditions, it is no wonder that the conservative vision of naturally “free” and corrupt government suffuses political rhetoric. In response, progressives need to articulate their own constructive vision of how citizens can be empowered politically, and how this political power can be used to reshape our economic future.

Economic vision and economic realities do not arise out of thin air.  Rather, they depend on the efforts of activists, thinkers and citizens to be articulated, developed, refined — and attempted. The current economic crisis caught progressives off guard. After decades of willfully absorbing conservative criticisms of the welfare state and defenses of free markets, progressives had let their own alternative values and vision atrophy. Until it remedies that failure, progressive politics will continue to fall short, despite particular electoral or policy victories. If progressives succeed in doing so in 2012, then the repercussions will last well beyond this one election.

The first essay in the 99 Percent Plan series is about the dangers of privatization. You can read it here.

K. Sabeel Rahman is the president of Demos and an associate professor of law at Brooklyn Law School. He has written widely for both academic and popular audiences on the themes of democracy, economic inequality and power, including the award-winning book "Democracy Against Domination" (2016) and two other forthcoming books.