As Dickens turns 200, a novelist reads him for the first time, and laments that peers have become so self-obsessed 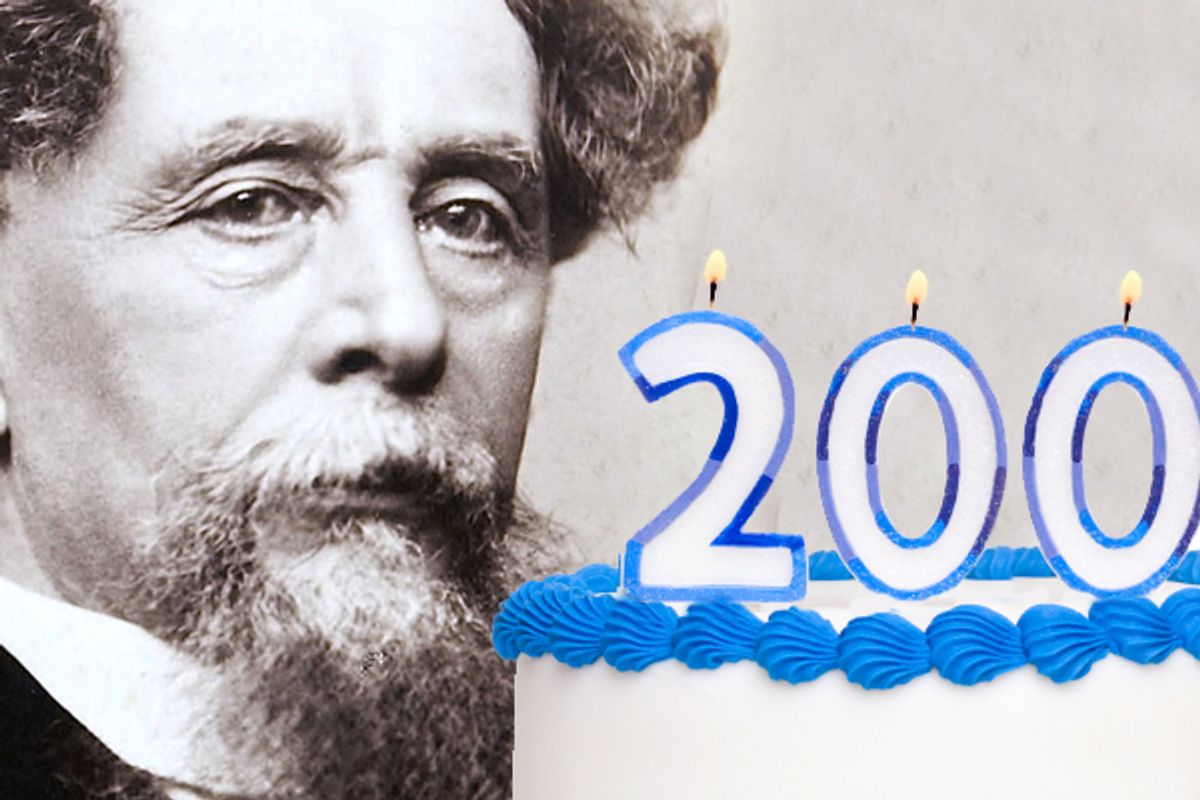 On Feb. 7, 1812, Portsmouth, England, received Charles John Huffam Dickens — a pomegranate-colored, squealing, slick-haired baby boy. Portsmouth is (and was) a teeming small city. In 1812 it was a major port for the British Royal Navy. Today, it has a higher population density than London.

Dickens was born at No. 13 Mile End Terrace, Landport. His mother, of course, had no anesthetic. He was named, in part, for Christopher Huffam, an oar-maker in London — now perhaps the most famous oar-maker of all time.

I love Dickens. Few writers have equaled his assessment of the human condition — somewhere between tragedy and comedy, with a poetic attention to beauty, and an investigation of man-made ugliness.

His characters have entered the popular imagination of even 21stcentury America — Scrooge becoming synonymous with miserliness, Miss Havisham with disappointed love, Wilkins Micawber with hopeful (if improvident) expectation. When Holden Caulfield refuses to set down his life story in the first sentence of "The Catcher in the Rye"...

If you really want to hear about it, the first thing you'll probably want to know is where I was born and what my lousy childhood was like, and how my parents were occupied and all before they had me, and all that David Copperfield kind of crap, but I don't feel like going into it, if you want to know the truth.

I wish I’d read Dickens by candlelight in my room as an adolescent. I wish I’d stacked his novels next to my bed and consumed them voraciously. I wish I could point back to that time when I was 12, and I read "Bleak House­," and yes — yes! — that’s when I knew I was going to be a writer.

But this isn’t what happened. I read the Hardy Boys, instead. And I got older. And I continued to not read Dickens. Not reading Dickens, actually, was pretty easy. Eventually, I received a Ph.D. in English literature from Cornell. I still had not read any Dickens, at all.

The fact that there was a massive gap in my reading life led — as massive gaps often do — to defensiveness. No novel, I argued, should be more than 400 pages! It was a crime, really, to claim so much of your reader’s attention! Down with the Victorians! Down with verbosity! Up with brevity! And on and on and on, ad nauseam.

So, for my 30th birthday, my older brother gave me my copy of "David Copperfield." He included this inscription: This can be one of those books that exemplifies the awesome power of world-changing ultimate unbelievable incredibleness! Read it and be blown away!

And, like older brothers tend to be a lot of the time, he was right.

This year, I’ve been rereading it all — all of Dickens’ novels, anyway — chronologically.

On Tuesday morning, I will wake up in the dark, make myself a cup of tea, and celebrate his birthday with the last page of "The Mystery of Edwin Drood," the final novel that, at the time of Dickens’ death, was unfinished.

What have I discovered?

"Our Mutual Friend" also conceals one of the most interesting biographical moments in all of English literature.

On June 9, 1865, Dickens was returning from a trip to France with the woman who may (or may not) have been his mistress, Ellen Ternan. This being Victorian England — they were also traveling with Ternan’s mother.

Just outside of a tiny village named Staplehurst, their train derailed. It was a spectacular, horrific accident. All of the first-class carriages — except the one containing Dickens and the Ternans — plummeted off of a bridge and into the River Beult. Ten people died, over 70 were injured.

Dickens used broken planks to shatter a window and pull himself and his companions to safety. Then, he set about ministering to the casualties. In his pocket, Dickens had always carried a flask of brandy. Now, he gave sips of the liquor to the injured and the dying. He also carried fresh water to them — in his top hat.

Dickens described this moment in the book’s final, serial installment, in a chapter titled: “Postscript, in Lieu of a Preface.” The “Boffins” he refers to, here, are central characters in the novel:

On Friday the Ninth of June in the present year, Mr. and Mrs. Boffin … were on the South-Eastern Railway with me, in a terribly destructive accident. When I had done what I could to help others, I climbed back into my carriage — nearly turned over a viaduct, and caught aslant upon the turn — to extricate the worthy couple. They were much soiled, but otherwise unhurt…

… I remember with devout thankfulness that I can never be much nearer parting company with my readers for ever than I was then, until there shall be written against my life, the two words with which I have this day closed this book: — THE END.

Dickens never fully recovered from the Staplehurt railway disaster. He had a stroke and died on its fifth anniversary. And he was haunted, for the remainder of his life, by the catastrophe’s lingering effects. He would have regular fits of trembling, vivid, dark nightmares, and he drank more heavily, in those last years, than he ever had before. He would never complete another book.

Fiction writing is a solitary, private endeavor. As privacy and solitude are eroded throughout the world by Facebook and Twitter and email and cellphones, I wonder what will happen to the formal aspects of fiction.

These days, more and more writers use their own autobiographies as the basis of their books. I myself have done this with my second novel, "Evel Knievel Days," which will be published in July. In March of last year I took a trip to Egypt with my Egyptian father — searching, in a sense, for my roots in that country. In "Evel Knievel Days," the book’s protagonist, Khosi Saqr, goes to Egypt to track down the father who abandoned him when he was 3 years old.

There’s a bit — just a tiny, tiny (minuscule) bit — of similarity, there.

Even as my own life drove me to the page, I was reading Dickens — who kept himself away from the page, mostly, or at least tried to. And I can’t help wondering if anything is lost in the frank disclosures of our modern, first-person, memoir-driven fiction. It’s fun to read, fun to write. It’s a reflection of our culture, as it currently stands.

But I do miss the Victorians, somehow — going on vacation with their mistress’ mothers, wearing stiff-sided top hats and starched white collars, living in rapturous love with the powers, with the capabilities (and not the failings), of the human will.

Pauls Toutonghi’s second novel, “Evel Knievel Days,” was published in July 2012 by Crown, a division of Random House. He lives in Portland, Ore., where he's an Associate Professor of Creative Writing at Lewis and Clark College.