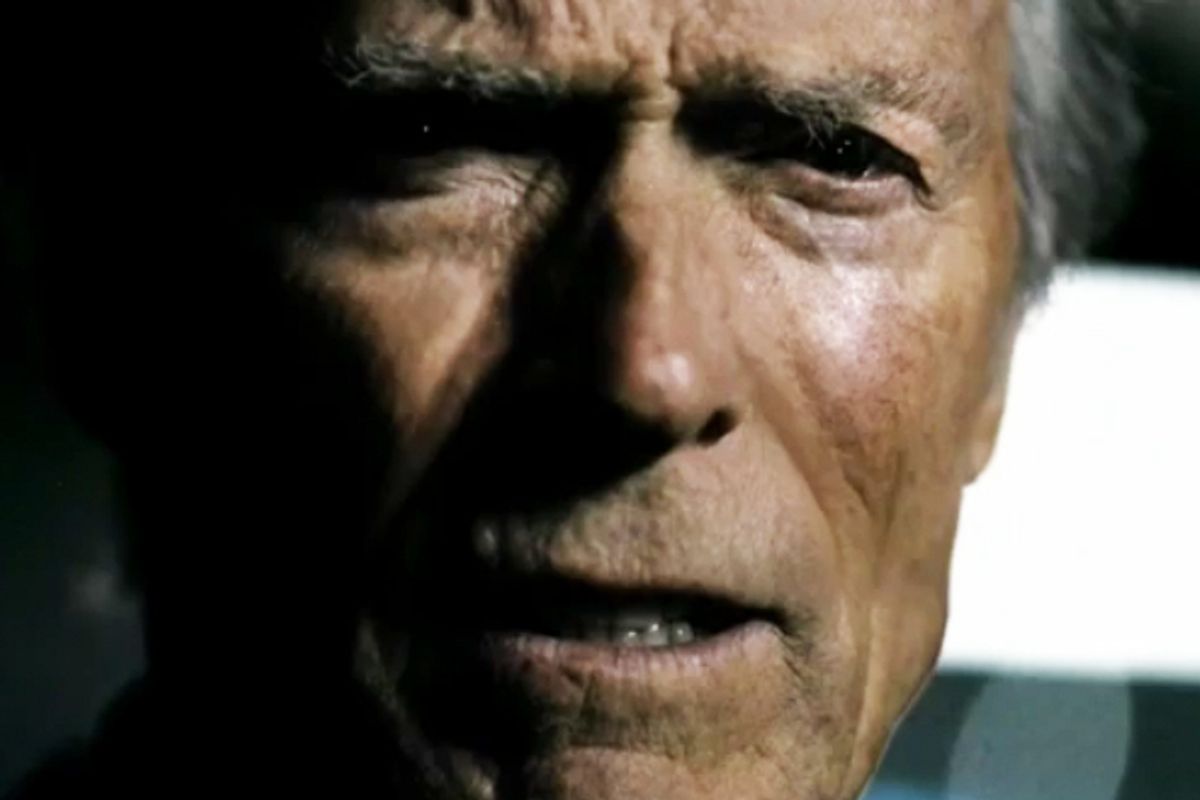 This much we know for certain. During halftime at the Super Bowl, Clint Eastwood touted the resurgence of Detroit while narrating a striking two-minute-long commercial for Chrysler, "Halftime in America."

But what did it mean? In a presidential election year, it is impossible to mention Detroit without political repercussions richocheting everywhere like shrapnel from an improvised explosive device. The fallout was instant: Clint Eastwood just picked sides!

For the conservative bomb-throwing blogger Michelle Malkin, Eastwood's stance was an affront to free market principles:

For liberal Michael Moore, it was an endorsement of President Obama.

Charges of hypocrisy poured in like Giants defensive linemen collapsing on Tom Brady. Clint Eastwood has long been regarded as a solidly libertarian conservative, and he is on record as having opposed the auto bailout. Yet here he was, cashing in, indirectly, on the auto bailout: taking what must surely have been a hefty paycheck to tout Detroit's comeback!

Of course, Eastwood is also a smart man, and by the evidence of his long career, he is not crazy. So maybe he changed his mind. Maybe he saw what's happened since the auto bailout and decided that in this case, government intervention was good policy. And maybe he's been looking at what passes for conservativism in the United States over the past few years, and he's disgusted. Because whatever you might think about the hypocrisy issue, there's absolutely no question that "Halftime in America" has a clear political subtext.

The commercial analogizes Detroit's comeback from hard times to the still unrealized recovery of the United States from the Great Recession. And it bemoans not just the hardship, but the hard feelings and disunity that currently define our political landscape. Here's one key section:

I’ve seen a lot of tough eras, a lot of downturns in my life. And, times when we didn’t understand each other. It seems like we’ve lost our heart at times. When the fog of division, discord, and blame made it hard to see what lies ahead.

Not only is that passage clearly a reference to the political fighting and harsh rhetoric of the past three years, but during that section, the commercial shows images of demonstrators in Wisconsin, protesting the effort by Gov. Scott Walker to break public sector unions! You can't get more political than that. Sure, as John Nichols at the Nation reports, the pro-union signs of the demonstrators were surgically removed from the shots, but even that revisionism doesn't obscure the power of the reference.. As a country, we're fighting each other, Eastwood is saying. Let's come back together ... and support government intervention in the economy!

Seriously, what else are we to make of this?

It’s halftime in America, too. People are out of work and they’re hurting. And they’re all wondering what they’re going to do to make a comeback. And we’re all scared, because this isn’t a game.

The people of Detroit know a little something about this. They almost lost everything. But we all pulled together, now Motor City is fighting again.

As commentator Greg Mitchell pointed out almost immediately at the Nation, mister straight-shooter Clint is not being factually accurate. We did not all pull together. Obama bailed out Detroit, and faced enormous criticism for it. It's exhibit A in the case for Obama's supposed campaign to create the United Socialist States of America!

The conclusion seems clear: If we're all supposed to pull together to reach a full economic recovery, just like we pulled together to rescue Detroit, then clearly we should be pulling together to reelect Obama. It certainly wouldn't make sense to all pull together to elect the guy who wanted us to let Detroit go bankrupt, would it?