If Clint Eastwood sounded like Obama, it's because the GOP has ceded optimism to the Democrats 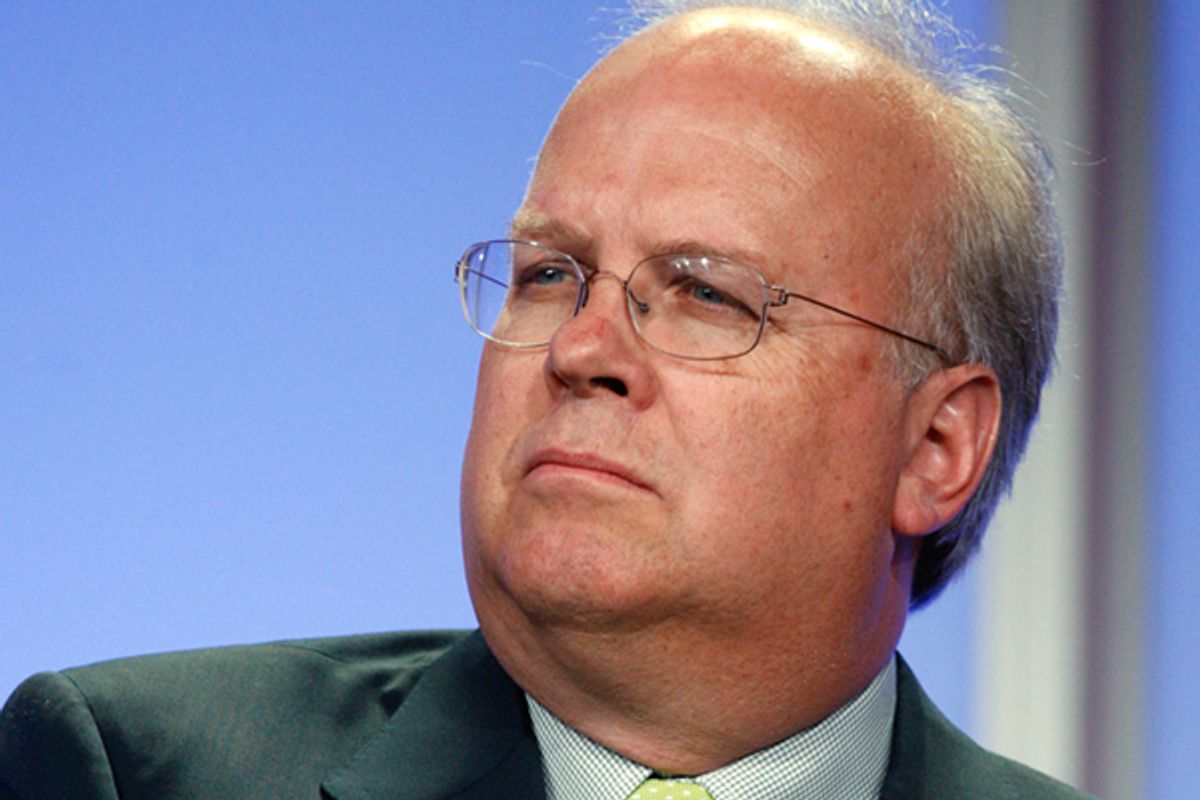 I admit it: Chrysler's "Halftime in America" Super Bowl ad reminded me of President Obama's best recent speeches. Actor Clint Eastwood, the face of rugged American individualism, talked about "tough eras" and "downturns" and "times when we didn't understand each other," but then declared:

But after those trials, we all rallied around what was right, and acted as one. Because that’s what we do. We find a way through tough times, and if we can’t find a way, then we’ll make one...

This country can’t be knocked out with one punch. We get right back up again and when we do the world is going to hear the roar of our engines. Yeah, it’s halftime America. And, our second half is about to begin.

Karl Rove heard echoes of Obama's rhetoric too, and implicit optimism about the direction of the country, and cried foul.

"I was, frankly, offended by it,” Rove said on Fox News Monday. “I'm a huge fan of Clint Eastwood, I thought it was an extremely well-done ad, but it is a sign of what happens when you have Chicago-style politics, and the president of the United States and his political minions are, in essence, using our tax dollars to buy corporate advertising."

Rove wasn't the only Republican who tried to cast the Chrysler ad as essentially payback to the president for supporting the bailout that kept the domestic auto industry alive. Michelle Malkin tweeted her horror Sunday night: “Agh. WTH? Did I just see Clint Eastwood fronting an auto bailout ad???”

Now, Clint Eastwood is no Democrat – he voted for John McCain in 2008, has been a Republican for most of his life, and now describes himself as having "libertarian" leanings. It's hard to imagine he'd lend his name to an openly and intentionally pro-Obama ad. Chrysler has denied any political motive behind the Eastwood ad.

The flap over the ad confirms the GOP's serious branding problem: The problem for Rove and the rest of the GOP is that their party's narrative has become relentlessly negative, pessimistic and uninspiring. They've left the language of optimism and resilience, higher ground and common ground, to the Democrats, and lately President Obama has grabbed every opportunity to employ that language.

Rove is essentially complaining that anyone using rhetoric of resilience and tenacity, or suggests "we all rallied around what was right, and acted as one" sounds like a gosh-darn ... Democrat.  That's good news for Democrats. There's more good news in recent polls showing that Obama is winning back at least some white working-class voters with his feistier message of economic populism. The president's approval/disapproval ratings have been dismal with whites who make less than $50,000, with his approval dropping into the low 30s and disapproval up in the mid-60s regularly over the last two years.

Now those numbers stand at 43-54, about where they were when Obama was elected. He may not carry that cohort, but holding the share he had in 2008 will make his reelection chances much better. There's also good news with those same voters in some Rust Belt states, including Wisconsin, Ohio and, yes, Michigan, home of Chrysler.

Karl Rove is angry because he sees the numbers, too, and he's got to explain them away with dark allusions to "Chicago politics." But the fact is the president saved the auto industry at a time when Republicans, most notably Mitt Romney, urged him to let it die. If he gets credit for that unpopular decision, that's because he deserves it.

And if Clint Eastwood sounds like a Democrat when he talks about American ingenuity and optimism, that's because increasingly it's Democrats who sound that way – and Republicans who don't. Ronald Reagan co-opted buoyancy and hopefulness for a generation, painting Democrats from Walter Mondale and Michael Dukakis through Al Gore and John Kerry (with a break for Bill Clinton) as Negative Nellies, whiners and complainers always finding fault with America.

Now it's Republicans who bad-mouth the American people, warning that lax morals and laziness are behind the problems of the poor and working class (including whites), and who paint scary dystopic pictures of America under its Kenyan anti-colonialist socialist black president. Karl Rove's hissy fit over the Chrysler ad underscores exactly how bleak his party's vision has become.