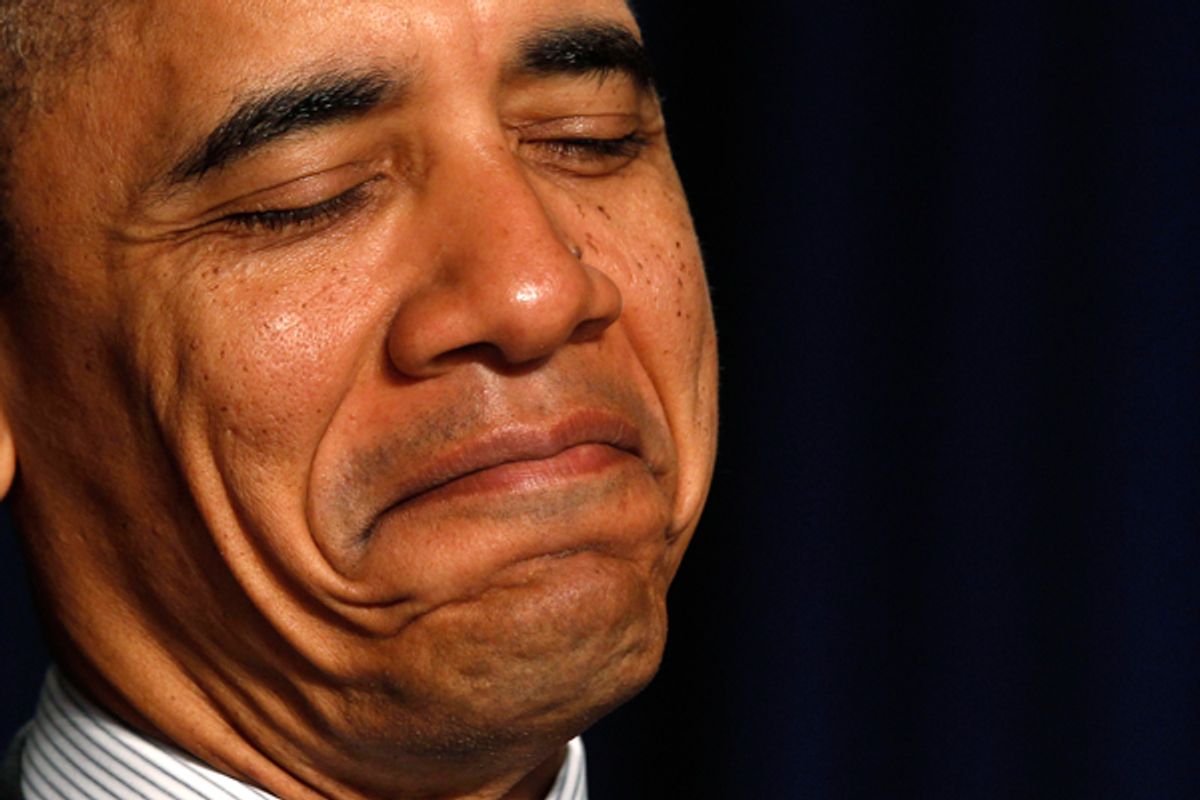 In an interview with Matt Lauer that aired before the Super Bowl, Barack Obama argued that "I deserve a second term." And if the election were held right now, he'd probably get one.

A new ABC News/Washington Post poll that shows the president opening a 6-point lead over Mitt Romney (and moving over the magic 50 percent mark) among registered voters has been generating plenty of attention today. It confirms the degree to which Obama's reelection prospects have improved recently. Just a month ago, the same poll gave Romney a 2-point edge (48 to 46 percent), and not since last July had Obama run ahead of Romney among registered voters. This is also the first time either man has cleared the 50 percent mark in the ABC/WaPo poll. Among all adults, Obama notches a 50 percent job approval rating -- his highest mark since last March.

To put the numbers in some context, here's a look at how recent incumbent presidents have stood in the ABC/WaPo survey at roughly this same point in their reelection years.:

Comment: From mid-1983 on, the unemployment rate (which had peaked near 11 percent just after the 1982 midterms) fell steadily, while Reagan's approval rating (which had fallen well under 40 percent after the '82 midterms) steadily recovered. When this poll was conducted, the jobless rate had dropped for five straight months and stood at 8 percent. Hart's poor showing was a result of his obscurity; within days, he posted a surprise (if very distant) second place Iowa finish, then parlayed it into the shocking New Hampshire primary victory that made him a national political star and nearly carried him to the nomination.

Comment: The poll was conducted three weeks after Clinton's "comeback kid" second-place finish in New Hampshire and just days before he won a series of lopsided victories on Super Tuesday. Scandals (Gennifer Flowers/Vietnam draft) that erupted in late January and early February help explain why Clinton wasn't performing quite as strongly as Tsongas, who suspended his candidacy just over a week after this poll was released.

Comment: With voters finally believing that the early-'90s recession was over and feeling more optimistic about the direction of the country, it was increasingly clear in early '96 that Dole would face an uphill fight as the GOP nominee. But his standing was worsened in this poll by his bumpy path to the GOP nomination -- which included a loss to Pat Buchanan (and near-third place finish) in the Feb. 20 New Hampshire primary -- and the poisonous effect of Newt Gingrich and his fellow House Republican revolutionaries on the GOP's national image. Another ABC/WaPo poll conducted a week later -- just after Dole posted a resounding Super Tuesday landslide that basically sealed the nomination -- showed a slightly closer race, with Clinton's lead at 9 points.

Comment: Kerry had not yet locked up the nomination (wins in Wisconsin on Feb. 17 and Super Tuesday on March 2 would cement his status), but he seemed well on his way. The Democratic primary season probably damaged Bush more than it did Kerry, because the candidates focused their messages on attacking the incumbent, and not each other. It was an unusually clean process that lacked much of the public acrimony that typically attends nomination battles. Bush began engaging the Democrats more directly in subsequent weeks; a month later, the ABC/WaPo poll showed Kerry's lead down to 4 points.

In Obama's recent improvement, there are shades of both the Reagan and Clinton examples.

Like Reagan, Obama is likely benefiting from good economic news. The current recovery is less dramatic and more tenuous than the one that was underway at this point in '84, but the fact remains that unemployment has fallen for five straight months and now sits at the lowest level since the first full month of Obama's term; voters have been hearing a lot more encouraging news about the country's direction these past few months. As Greg Sargent points out, the new poll contains evidence that Obama is winning back blue-collar white voters, with whom he now enjoys a 43 percent approval rating:

While those numbers don’t appear too good at first glance, things are trending Obama’s way. This is his best level among non-college whites since early last year (excluding the post-Bin Laden bump), and they are far better than they were at their lowest point in 2010, when Democrats suffered massive desertions among this constituency.

Plus, the poll was conducted last Wednesday through Saturday, meaning that it doesn't really reflect the impact of what was to date the best economic news of Obama's entire presidency, the jobs report released on Friday.

And like Clinton, Obama is also getting some help from the other team. Romney seems on course to win the nomination, but the process has been messy for him, just as it was for Dole in '96. Thanks in part to unexpected attacks from Gingrich and Rick Perry, significant attention has been paid in the past month to Romney history in private equity and his own tax status, subjects that the Obama campaign figured it would have to introduce later in the campaign. The scrutiny from his rivals and the press has taken a toll on Romney's standing with some key general election constituencies. Also like Dole, Romney is probably being hurt by his association with a tainted Republican Party brand.

The strides Obama has made toward reelection are all reversible. But if nothing else, his recent progress affirms that good economic news and infighting among the opposition party make a pretty solid formula for an incumbent president.