The screwed generation: Libertarian, not liberal 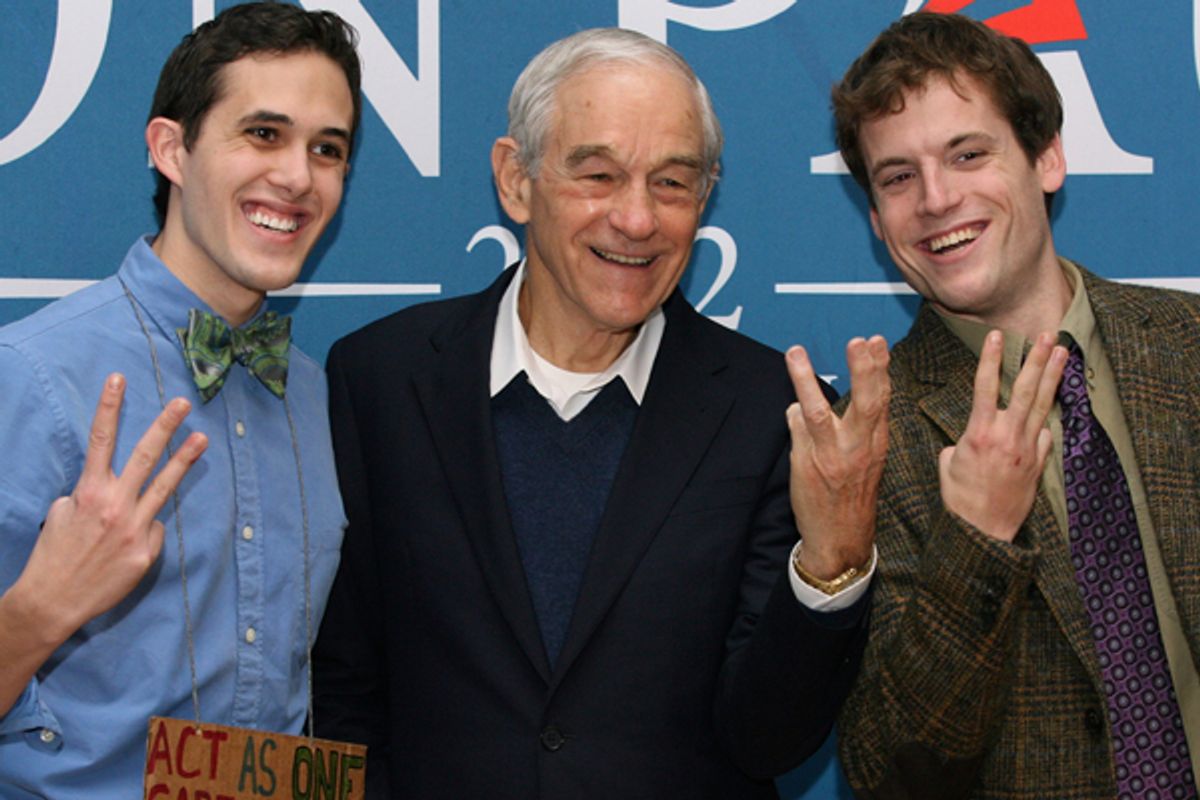 There is an old adage that says, "If you're young and conservative you have no heart, if you're old and liberal you have no brain." The idea is that young people tend to make decisions more on idealistic views or out of passionate attempts at charity and altruism. While there is some truth to that for Generation Y (meaning people born in the '80s and '90s), the results are  manifesting themselves in a totally different way.

We are the generation that continues to pay into Social Security with every paycheck but suspects we may never see the benefits of it. We are the recipients of degrees that don't mean much from educational institutions that teach less and cost more. We are the casualties of wars that have gone on for over half of the lifetime of 2012's first-time voters. In short, we are the screwed generation. The decisions of those before us has left us with an uncertain future and little opportunity to fix things through traditional means.

The ever-present skepticism of youth is even greater within the collective consciousness of Generation Y. And how could it not be? With our first real chance to make a splash in the world, we got behind Barack Obama in overwhelming numbers. He was a candidate who promised progress in every issue that the under-30 crowd found to be important: end the wars, defend gay rights and provide universal healthcare to the American people. While he's made some steps forward, it's been slow moving. Meanwhile, the House and Senate have deliberated on bills that would censor our voices on the Internet, a medium on which my generation relies heavily for communication and pretty much everything else. Just as we organized online to support Obama in 2008, we organized the protests against legislation like SOPA and PIPA, and the Occupy Wall Street movement uses the Internet to broadcast its events and actions.

So when the traditional liberal means of protecting ourselves -- uniting behind the government to promote action that benefits the common good -- no longer serves our best interest, we begin to serve our own. We have a new set of morals that have been established because the old ones were no longer cutting it.

Ask any kid on the street their opinion on gay marriage. I can almost guarantee you they'll be in favor of it, or at the very least aren't opposed to it. Ask the same about abortion and you'll find a similar amount of permissiveness. If they aren't in possession of marijuana, they probably know someone who is. This is what we bring to the table: a lenient, open-minded approach to personal decisions. It's reflected in almost every part of our culture. We're decidedly less religious, with only 44 percent of our age bracket finding religion to be important. That doesn't mean there aren't still many people of faith in our generation, but even those who believe are more understanding of those who don't. We're a generation that pirates television shows, movies, games and music, but will show up to more concerts and support independent artists and the media we love. Many of the universal views of our generation come down to holding a permissive attitude toward the behaviors of individuals.

The caveat that comes with this leniency is personal responsibility. This is a cautionary message that this generation is more than happy to deal with. We're willing to grant people the right to live their lives however they please, but if they mess up it's on them to fix it.

This is why libertarianism -- and the Ron Paul candidacy -- has been so appealing to young voters. Paul ended his candidacy for president in 2008 polling at about 6.5 percent nationally. From the moment the campaign trail opened back up for a 2012 run, his support has increased steadily, and he currently sits at around 12 percent in national polls. He's also continually dominated the youth vote in nearly every primary. It's no fluke that the old guy preaching liberty and personal freedom is getting the attention of the youngest demographic, either. Because Paul supports sending social issues down to the states, he's no longer having those discussions; he'd rather talk economics.

This is what makes the Ron Paul movement truly important. He's not the perfect candidate, but watch any event that he shows up to in any given state. His audience is overwhelmingly made up of college-age kids who happily applaud at ideas like a 0 percent income tax, abolishing the Federal Reserve, and reinstituting the gold standard (or something equivalent) that would put value behind the U.S. dollar again. Not only do they cheer, but they understand. These are concepts that aren't lost on them, but rather resonate in them. These are the conversations that we're willing to have, and the ideas we're willing to debate about.

The fact that there are still discussions between contending candidates about whether gay marriage should be legal or if women should have the right to have an abortion is shameful in the eyes of the youth vote. We're done with those debates. There may not be a total consensus, but it's pretty clear where the majority of our generation stands. Marriage equality falls under basic civil rights and there shouldn't be a need to debate such right any longer. Let's be honest, when we're facing a domestic and global recession, high unemployment and a blunder-filled tax code, social issues act only as a distraction to engage the "religious right" and the "hippie left." By jettisoning social issues, Paul is able to have a conversation about fiscal policy with a bunch of kids who are growing up in a new economy. With Paul, we're able to talk about what we're willing to support and where we want our tax dollars to be spent.

We still vote with our heart; it's just in a slightly different place. We'd rather bring home our troops from overseas and save those lives while spending that money to establish a universal healthcare system that will save even more. This isn't necessarily because we believe the government should take care of us, it's because everyone deserves to be healthy and the powers that be before us mangled the system so badly that it's becoming impossible to afford. This is an example of our generation trying to take care of our own as much as it is trying to create change. While the concept of universal healthcare may be defined as "liberal," it's a fairly libertarian approach of non-interventionism and personal rights that brings us there.

It's a compassion for the lives of our cohort combined with an understanding of personal responsibility that defines the ideals of this generation. We're still "liberal," we still may vote with our hearts, but we do it out of the belief that we have the freedom to make those choices and live with them. Ron Paul might drop from the sight of the media after the election but his ideas will continue to boil. If our conversation about fiscal reform starts to reshape our economy, we will spearhead sweeping social change.