The secretive military system for prosecuting accused terrorists is a travesty, says the man who once ran it 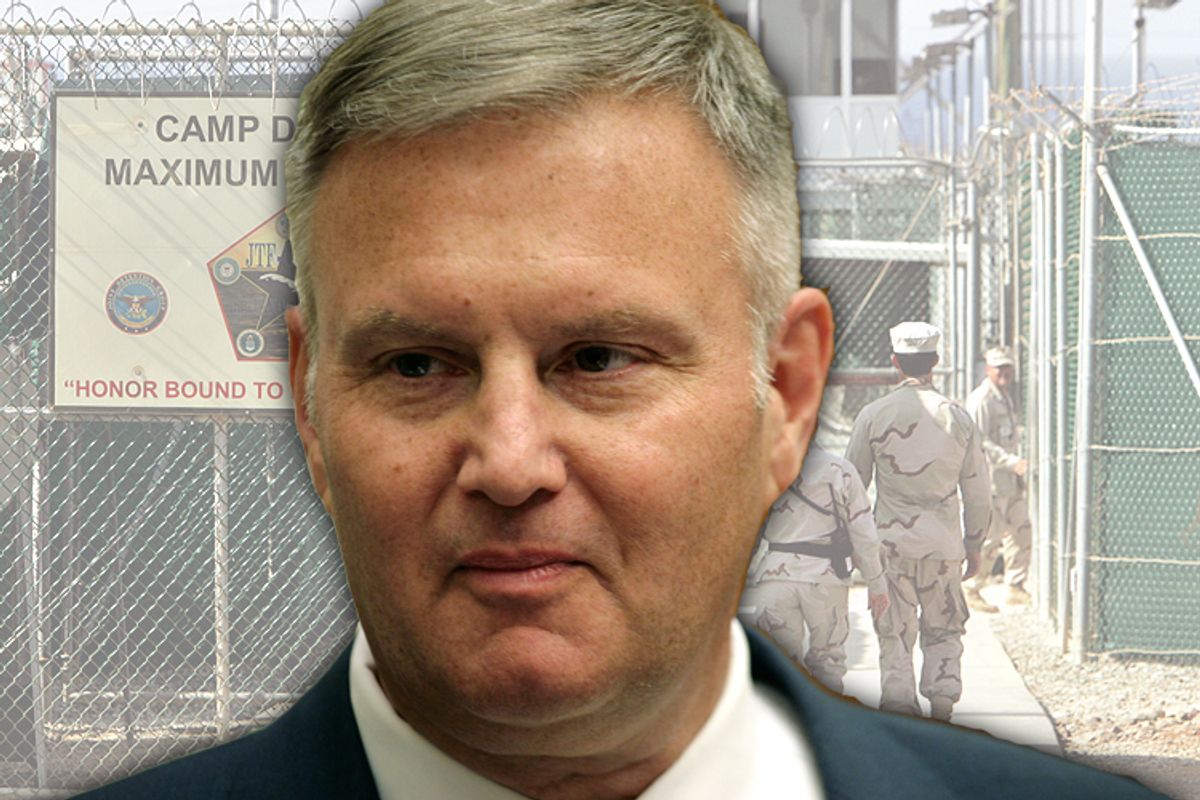 The U.S. Defense Department specializes in euphemism. “Limited kinetic action” is a polite way of saying “war,” and “collateral damage” does not sound as blunt as “dead children.”  When I was chief prosecutor for the military commissions at Guantanamo Bay during the Bush administration, I was told not to say publicly that a detainee had “attempted suicide.”  The government-approved term for the act was “self-injurious behavior.”  I could not say “torture,” or as some called it, the “T-word." Instead, I had to say “enhanced interrogation techniques.”

The euphemism tradition remains alive and well in the Obama administration.  The slogan “fairness, transparency, justice” is featured prominently throughout the military commissions’ new half-million-dollar website.  The slogan even shows up when case document links lead to a notice saying the “document you are trying to access is currently undergoing a security review” and might be posted later if the government decides it is “publicly releasable.”

Say you are interested in the case against Abd Rashim Nashiri, the alleged mastermind of the USS Cole bombing in Yemen in October 2000 that killed 17 U.S. sailors.   You are not allowed to see the judge’s docketing order setting April 11-13 for the next session to consider motions.

You are not allowed to see a key motion seeking authorization for Nashiri’s lawyers to depose former Yemeni President Ali Abdullah Saleh while he is in the United States.  The Obama administration is permitting Saleh to visit New York City for medical care; many believe he should be at the International Criminal Court facing charges for turning his forces on Yemeni protesters resulting in 270 civilian deaths.

Before being elected to the presidency, Barack Obama condemned what he said were “flawed” Bush-era military commissions.  He voted against the Military Commissions Act of 2006 when he was a member of the Senate and he argued that detainees accused of criminal conduct should be tried in federal courts or courts-martial, either of which he said would “demonstrate our commitment to the rule of law.”  Six years later it appears all it takes to transform fatally flawed into fundamentally fine for Barack Obama is to tack a new word onto an old title to give it a euphemistic revival: now we have "reformed military commissions."

Brig. Gen. Mark Martins, the sixth and current chief prosecutor for the military commissions, gave a talk to the New York City Bar Association last month.  In it, he used the phrase “reformed military commissions” more than three dozen times.  Apparently tacking the word “reformed” onto “military commissions” and using it over and over is supposed to erase a decade-long record of failure that has, as then-Sen. Obama said, tarnished “our credibility as a nation committed to the rule of law.”

President Obama ordered a halt to military commissions as soon as he took office in January 2009, but he backtracked a few months later in the face of conservative fear-mongering.  Nine months after President Obama took office, the Democrat-controlled Congress passed the Military Commissions Act of 2009 to replace and reform the process it had created in 2006 to replace the process President Bush created in 2001.  The slight change in 2009 is supposed to let President Obama save face.  The military commissions authorized in 2001, 2006 and 2009 have so far generated 51 implementing documents totaling 2,352 pages setting out rules and procedures.  Each series of reforms purports to be better than the last, which had purported to be better than ones before.  Each has failed.

I honestly believed we were committed to full, fair and open trials when I became chief prosecutor in 2005, but I lost confidence in that commitment over time as political appointees tried to manipulate the process and make it more like a theatrical production than a judicial proceeding.  After more than a decade of futility and failure, the question is no longer whether the U.S. could proceed with “reformed again and again and again military commissions,” but whether it should.

In his recent talk, Brig. Gen. Martins said, “while federal courts will and should objectively be the appropriate forum in most instances, reformed military commissions will sometimes be the better choice.”  His rather vague statement raises some issues that should be considered before lumbering along even further down the sullied military commission path.

Which cases are candidates for military commissions?  Brig. Gen. Martins said federal courts are the appropriate forum in most instances and that military commission cases may be “numerically few.”  The administration has identified fewer than three dozen detainees they intend to prosecute for alleged criminal conduct.  How will those cases be divided between federal courts and military commissions?  Sen. Dianne Feinstein hinted at the answer during a Senate Judiciary Committee hearing in 2010 when she told Attorney General Eric Holder that in choosing between the two forums, “make the decisions based on the legal facts and where we best get a conviction.”  If you peel back the rhetoric and examine the ground truth, military commissions likely end up the “better choice” when there is a chance the U.S. government might not be assured of a conviction elsewhere.  In other words, the U.S. will afford an accused all the justice possible while ensuring the cards are stacked decidedly in the government’s favor.

Military commission proponents rationalize the need for this peculiar forum citing the exigencies of war and the unique circumstances presented on the battlefield.  That argument would be more persuasive had most of the Guantanamo detainees been captured under circumstances bearing some resemblance to battle.  They were not.  For example, Khalid Sheikh Mohammed was rousted from a bed in a house in Rawalpindi, Pakistan, by Pakistani authorities, and Abd al-Rahim al-Nashiri was captured in the United Arab Emirates without any U.S. military involvement.  In the end, it is not so much what the detainees did that make military commissions the better choice, it is what the U.S. did that may not stand up to traditional principles of justice.

The U.S. has invested a great deal of effort in trying to revive a military commission process it last used in World War II and make it fit the unique circumstances of a handful of post-9/11 terrorism cases.  There have been 779 men detained at Guantanamo over the past decade.  Only 171 remain, and a majority of them have been cleared for transfer (about 89 men) or designated for indefinite detention without trial (about 46 men).  Four more have already been convicted and sentenced, leaving 32 potential cases for prosecution.  The last of the 32 was captured in 2006, so the facts of any case have not changed in more than five years.

Rather than developing these few cases to conform to the rules of regular federal court, the U.S. has tried to develop an irregular military court to accommodate the cases.  The end result – at least until the next reform attempt – is a process where an accused can spend a decade or more waiting for his day in court; nearly all of the information is classified and the accused only gets to see what the prosecution decides is appropriate; the government demands that it gets to see the information shared between the accused and his attorney; and even if the accused wins, he is likely to still spend the rest of his life in prison.

This is the kind of "heads we win, tails you lose" process the U.S. condemns when it is used in other countries.  If President Obama thinks this is going to restore America’s reputation as a nation committed to the rule of law he is mistaken.  Pinning the word “reformed” to the title does not make a silk purse out of this sow’s ear of justice.

Morris Davis was chief prosecutor for the military commission at Guantanamo Bay, Cuba, from 2005-2007. He is a retired U.S. Air Force colonel and a member of the faculty at the Howard University School of Law in Washington, D.C.