Is the far-right Catholic candidate benefiting from a conservative fixation on gay marriage and contraception? 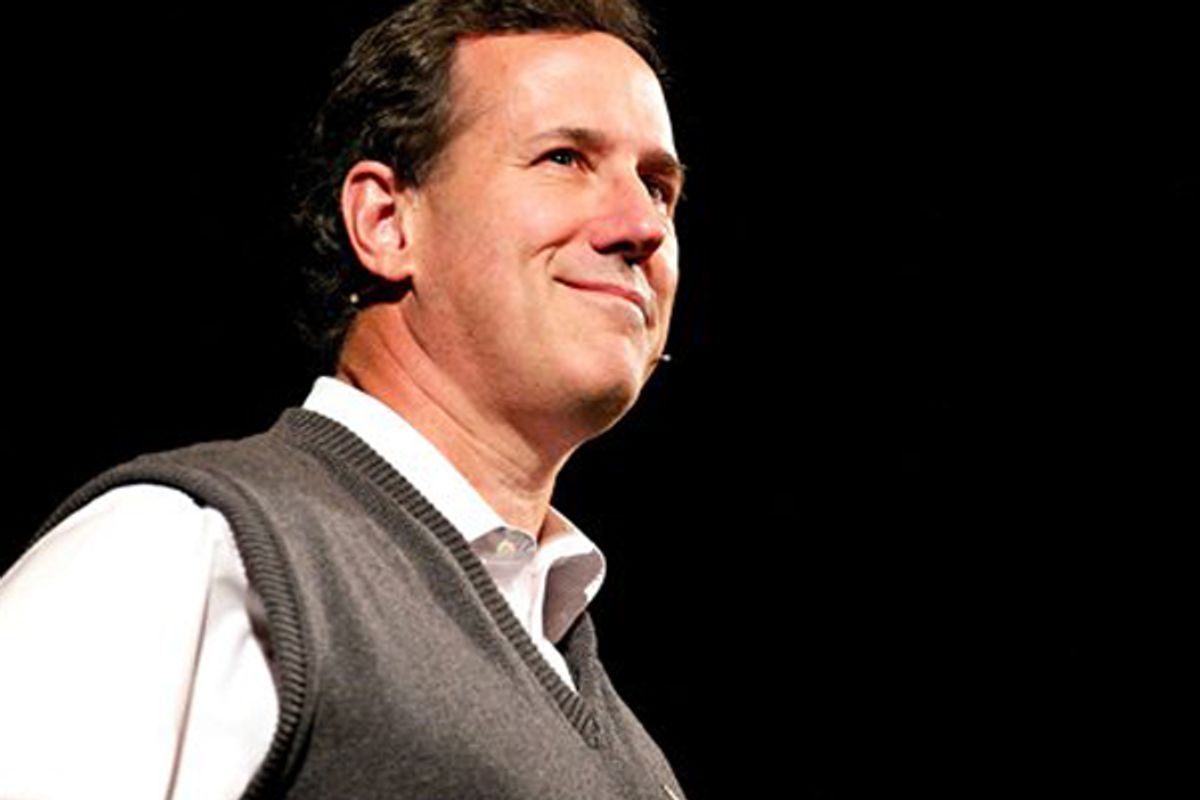 Thrilling news, Americans! After today, we all have an excuse to pretend that Rick Santorum might win the Republican presidential nomination. And we will get to pretend this for weeks, or as long as he can pretend to have some sort of vaguely defined "momentum."

After weeks of Mitt Romney and Newt Gingrich angrily hurling wads of third-party cash at one another, Republican voters have realized (for the second or third time) that Romney is an aloof job-destroying multimillionaire rentier and Newt Gingrich is an erratic narcissist scam artist. Being mostly ignored turned out pretty well for Rick Santorum, whose repellant bigoted sanctimony reads as righteous piety to the die-hard evangelicals and old cranks actually showing up to vote in these increasingly depressing Republican contests. And so, as Steve Kornacki writes, he's the new not-Romney, and he's poised to win Missouri or Minnesota or Colorado or some combination of the three today.

Santorum was also the recent beneficiary of one of those slightly fishy Rasmussen polls showing him besting the president nationally 45% to 44%.

Some pundits are already preemptively deflating the hype they haven't even bothered to fully build up surrounding the not-yet-transpired Santorum victory. The Washington Examiner's Byron York predicts a good day for Santorum, but notes that both the Gingrich and Santorum campaigns are praying for the other one to just give up already so they can consolidate the anti-Romney vote. It ends, sadly: "it's entirely possible that neither Santorum nor Gingrich will pull ahead in the race to challenge Romney."

But if there's one factor (besides the political press' institutional bias in favor of long, drawn-out races) that could actually give Santorum a real advantage in the near future, it's the surprising number and variety of "culture war" issues that have suddenly become very prominent.

There is today's Ninth Circuit ruling affirming the striking down of California's gay marriage ban (Newt Gingrich, having already promised to have the entire Ninth Circuit tarred and feathered, is predictably excited). There is the Susan G. Komen for the Cure meltdown over grants to Planned Parenthood, which culminated in the minting of a brand new conservative martyr as Karen Handel resigned to take stock of the think tank and cable news opportunities available (possible VP pick?). And there is the most obviously manufactured of the current outrages, over the Obama administration's decision to require that employers cover contraception and birth control in health insurance plans, even if those employers are people who subscribe to the Catholic Church's morally repugnant and indefensible anti-contraception policy. (Which most American Catholics don't.)

All of these, most of all the last one, are perfect stories for a candidate like Rick Santorum, so long as this remains a contest to win over outraged elderly ultra-conservatives. And indeed, Santorum has launched an unfair-ish attack on Romney, accusing him of forcing Catholic hospitals to provide emergency contraception. Santorum wants the voters to know that he's always been the candidate most dedicated to protecting women from the responsibility of having any agency whatsoever over their role in the reproductive process!

(Would it be conspiratorial to note that these divisive cultural issues began attracting a great deal of right-wing attention very soon after the release of a positive jobs report? A little bit, probably.) (Also: Remember when the Tea Party meant the GOP was going all libertarian and abandoning social issues? Ha, ha.)

Not that you should take any of this to mean that Santorum's good day (which has not yet happened and still may not actually happen) is indicative of anything other than a fickle minority of conservative voters drifting toward whomever was least recently savaged in the press and in attack ads. But if you note your favorite anti-Romney conservative pundits and bloggers rather suddenly talking a lot more about contraception and the gay agenda, don't be too surprised. Santorum's positions on these issues horrifies most Americans ("I will force rape victims to carry their pregnancies to term!" is not a general election winner), but most Americans don't vote in Missouri Republican primary elections.