The (real) secret to hot sex 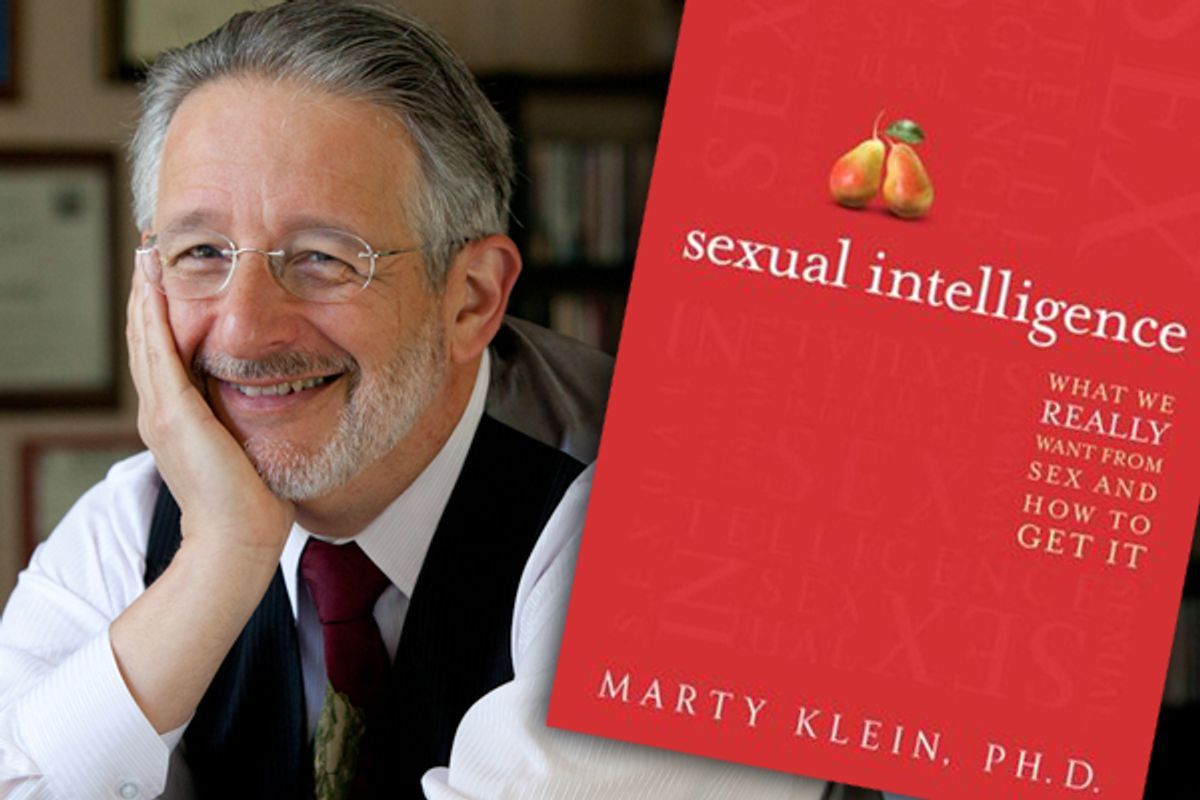 Looking for the hot new position that will transform your sex life? The bedroom technique that will bring ultimate satisfaction? Look no further.

It isn't the sexiest directive, but it might actually get you somewhere. Klein has drawn on more than 30 years of counseling experience for this smart handbook on how to develop what he calls "Sexual Intelligence," which he describes as the thing that "gets you from hormone-driven sex to sex you choose," "from 'sex has to validate me' to 'I validate my sexuality.'" The challenge here is to let go of notions of what "successful" and "normal" sex looks and feels like. The reward is a sex life where "failure" is virtually impossible.

Salon spoke to Klein by phone from his office in Palo Alto, Calif., about why so many sexual problems can be blamed on idealizing sex and our bodies as they were in our youth.

What is it, based on your experience with clients, that people most want from sex?

What should we expect from sex? What expectations are more realistic and more likely to bring actual satisfaction?

Well, partly that depends on what people are willing to put into it. You could say, "What's realistic to expect from a meal?" and if you have very little in the refrigerator and you only spend five minutes cooking and you don't have a decent pot or pan and you're talking on the phone while you're doing it and not paying attention, it's unrealistic to expect a gourmet or satisfying meal. On the other hand, if you put enough time and effort and care into it, it's not unrealistic to expect a good dining experience.

So, when it comes to sex, clearly it's unrealistic in long-term relationships to expect the kind of heat and desire and passion that we typically experience in the early days of a relationship and in our youth. One of the reasons that grown-ups in long-term relationships don't have much sex is they're waiting to feel incredibly horny. What's more realistic to expect from sex, if you put some effort into it, is to feel connected with somebody, to feel a sense of ownership of your body, a sense of a vacation from real life for half an hour. What's not reasonable to expect is that sex at 45, with the same person you've been with for 10 years is the same as sex was at 25 when you were first getting to know somebody.

Why is it so hard to move away from that ideal of sex as it was in our 20s?

Most of us develop our vision of sexuality between 15 and 20. At that time we have a very particular kind of body: it's young, it's healthy, it's flexible, it's conventionally attractive. And so we associate that body and that body's abilities with good sex. We say that good sex is the kind of sex you can have if you've had five margaritas, or you can have good sex when someone has a face without any lines on it.

The model of sexuality that we develop between 15 and 20, it just doesn't work for us when we have the body of a 47-year-old, when you have to take ibuprofen an hour before you have sex. There's also a different emotional and psychological context. There's a different ecology. You have responsibilities, you don't have a lot of time to kill, you have to wake up early the next morning, you have children you don't want to wake up when you're having sex. When we're young, we don't have to develop the skill of planning for sex, of being patient, of waiting for when it's going to be the right time.

Well, you know? You can't have that. How many 40-year-olds who have any sort of a life do anything spontaneously? I mean, look at you and I, we wanted to have a conversation and we had to plan it. We didn't say, you know, when you're in the mood, give me a call.

This yearning for spontaneity is so poignant, because what people are really saying is, " I yearn for the uncomplicated life that I used to have where sexuality was at my disposal 24 hours a day, rain or shine."

Why is that? Obviously, there's the desire to not hurt your partner's feelings, but it also seems there's more there.

I think that's part of it. I think people are afraid that if they start talking honestly about sex, they're going to be opening Pandora's box. I also think that not everybody has the vocabulary, not everybody can say exactly what they want or how they feel. A lot of people find it easier to say, "You did something wrong," rather than to say, "Let me tell you how that felt to me." Instead of saying, "You're frigid" or "You're too kinky," you say, "I feel unattractive" or "it's not that I don't like oral sex, it's just that whenever you're going down on me I feel so exposed, I feel so foolish." If only people would talk more about feeling foolish in bed, rather than what the other person is doing wrong. A lot of people talk about what's wrong with sex, like sex did something wrong. When people say that in the office, I say, "Well, rather than telling me what's wrong with sex, why don't you tell me how you feel?"

Why is it that the typical self-help approaches don't work when it come to sex? Why isn't it as simply as the ten hot new moves you need to try tonight?

Let's compare it to something else -- say you want to take care of your health. What we know is that articles like "five ways to burn fat better" just don't work. There's a step before that and that's creating the emotional environment in which people can take advantage of that information. For most people, the emotional environment for taking advantage of those "hot new moves" just isn't there. People aren't up to what moves they should do, they're stuck thinking, "I'm afraid that if we have sex with the lights on he's gonna think that my butt is too big." If someone is stuck on "My penis is the most important thing that I bring to sex," then talking to them about what to do with this finger or that hand or this foot is just pointless. But that's what self-help books focus on constantly when it comes to sex: what to do with your body.

Obviously, there is so much bodily insecurity going around -- how do you even start toward that point of feeling sexy in your own skin?

Part of it is getting the idea that it is possible to detach how you look from how you feel and that sexiness is not a product of what your body looks like from the outside, that sexiness is a product of how you feel on the inside. Part of it is acknowledging that somebody somewhere has the ability to feel sexy independent of how they look on the outside. We have to get the concept that it's possible for some people to feel sexy based on what's on the inside rather than what's on the outside. From there it's a question of a person tuning into what do I have to offer somebody else sexually, and what do I have to offer myself sexually? If a person enjoys kissing a lot, regardless of what they look like they could say to themselves, well, that's part of what makes me sexy.

You write so much in the book about how people worry about being sexual normal. What is sexually normal?

Most people who want to know what's sexually normal, they're not going to use that information in a wholesome way. Most people want to know what's sexually normal so that they can compare themselves or their mate to that standard. If I say 80 percent of 30-year-olds have oral sex at least once a month, somebody's gonna compare themselves to that and say, "What's wrong with me that I don't do that?" Or they're going to look at their mate and say, "What's wrong with you?"

Now if you want to know what's statistically common when it come to sex, as I say in the book, it's that people have sex when they're tired and when they feel self-conscious about their bodies.