What's the matter with Indiana? 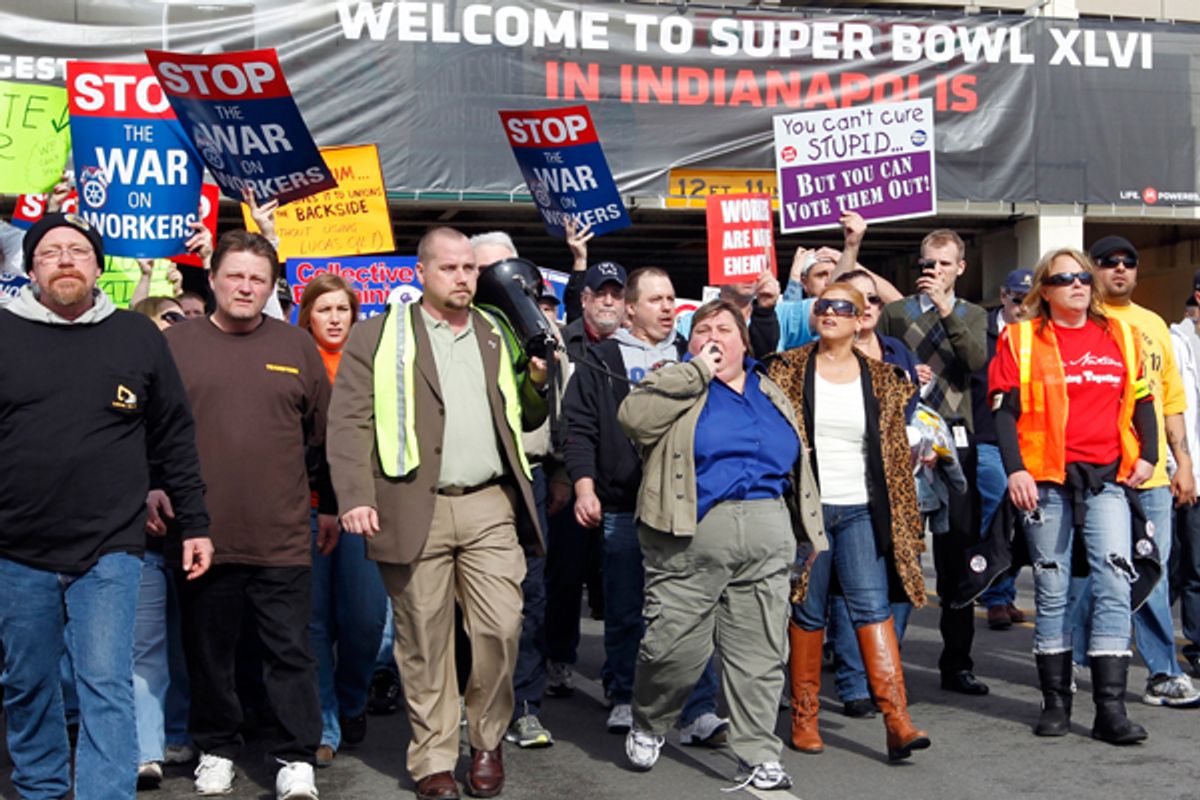 I, for one, felt there was one thing missing from an otherwise exciting Super Bowl Sunday in my hometown of Indianapolis. There was nary a public peep from union workers about the twin hammer blows — the second delivered only days before the big game — brought upon their heads by the state’s conservative Republican lawmakers.

Just last week Indiana Gov. Mitch Daniels led state legislators to pass a "right-to-work" law — the first in the Midwest — striking at the heart of union dues collection and further weakening a union movement that makes up only 11 percent of the labor force, a shade below the national average. Upon taking office in 2005, Daniels had also terminated collective bargaining with all public employee unions by executive order. Together, Indiana’s anti-union blows were decidedly tougher and more brazen than those delivered by Gov. Scott Walker in Wisconsin.

Yet, the popular reaction and public protest in Indiana were relatively mild compared to the seizure of the state capitol and subsequent wave of teacher strikes and extended mass protests centered last year in Madison. Other than leafleting festive crowds with a “remember-the-workers” message, state labor officials and Occupy Indianapolis activists kept a low profile. “We don’t want to disrupt anything. We just want to protest, for people to see us and hear our message,” said one Occupy Indianapolis organizer. Indeed, the Indiana State Federation of Labor reportedly counseled against any Super Bowl demonstrations for fear that politics would be resented at a sporting event. What, then, explains the relative passivity?

In Indiana, union forces never found a way to align their plight with the perceived interests of a majority of Hoosier voters. The Wagner Act of 1935, keystone of labor rights in the private sector, pointedly identified “inequality of bargaining power” among “employees who do not possess full freedom of association” as a cause of business depressions, “by depressing wage rates and the purchasing power of wage earners in industry.” In that spirit, Indiana union leaders assailed the right-to-work law as an attack on high wages. Yet the argument is no longer self-evident. Today’s Republicans assert, to the contrary, that weaker and fewer unions will relieve the recession by attracting more jobs, even if with reduced pay and benefits. This is a difficult debate to win. No one wants a race-to-the-bottom, says one side. Is there another game in town, asks the other.

An argument centered on the economy already puts the union forces on the defensive. Why should they have to rest their case on statistics of employment growth and business investment over income standards over which they have only limited influence? They are far stronger if they hold to unionism as a principle -- i.e., labor rights are human rights. People are better off if they have a say at their workplace. No one today, for example, would publicly advocate restrictions on African-Americans' or women’s rights in order somehow to jump-start the economy. Note that even Newt Gingrich’s call for sub-minimum wage jobs for poor children did not find a receptive audience. Today, discrimination is taboo in all aspects of society except one: union preference.

Yet, how much do workers themselves — private sector or public sector — value their own union rights? In Wisconsin, the union presence seemed wedded to a deep sense of civic identity, including connection to a long-standing state tradition of “progressive” innovation and peaceful reconciliation of differences among competing social and economic interests.

In Indiana, despite the fact that Indianapolis had once hosted more union headquarters than any other city in America, legislated reduction of the union presence triggered no visible sign of larger public hurt. That the union leaders themselves viewed the issue as “mere politics” betrays their own skepticism that worker rights can truly appeal to the public conscience. Yet they stopped short of making the effort: Had thousands of workers — machinists, teachers, nurses, construction workers, et al. — assembled in a disciplined, nonviolent ring around Lucas Oil Stadium, they might have changed the chemistry for the next round of statewide elections.

Political leadership and strategy were equally absent inside the arena. Like Indiana workers, the NFL Players Association, an affiliate of the AFL-CIO, ultimately depends on state and national labor laws that set the framework and standards for collective bargaining. Yet, beyond a press release and letters of protest from a few Indiana-born players to their state legislators, the Players Association dropped the ball in response to the governor’s anti-union assault.

I could only think of how different was the determination of the 1968 Olympic athletes who raised a black-power salute at their official Olympic awards ceremony. If a similar sense of solidarity had been on display in Indianapolis, players from each team might have unfurled a “union” banner — Norma Rae-like -- at halftime and carried it aloft to their respective locker rooms. Better yet, they would have handed off the emblems to Madonna, a long-established member of both the Screen Actors Guild and Directors Guild of America.

I’m dreaming, of course. This is Indiana.

Leon Fink, who graduated a year prior to Governor Mitch Daniels from Indianapolis’ North Central High School, teaches labor history at the University of Illinois at Chicago and is the author of "Sweatshops at Sea" (2011).