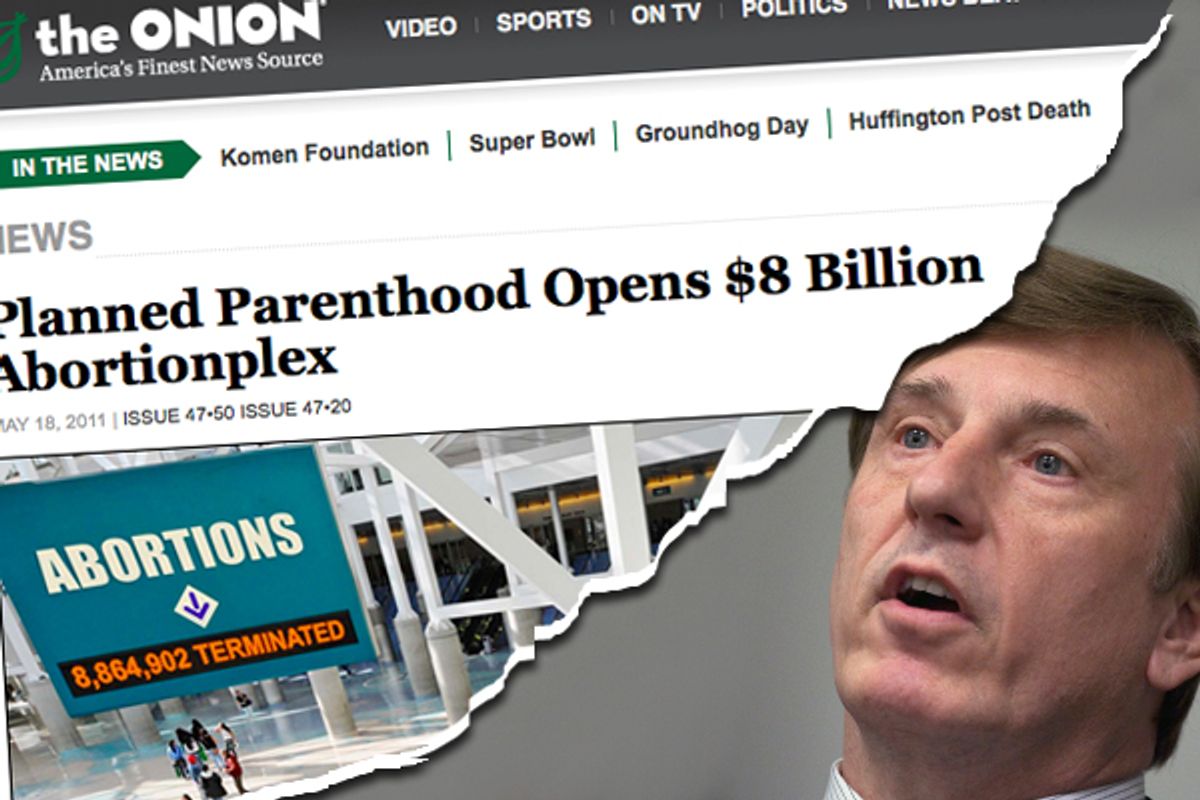 The "Abortionplex" in Topeka, Kan. -- with its three-story nightclub, pet adoption center and "more than 2,000" abortion-ready rooms -- is just as fictional today as it was last May, when its opening was "announced" in the Onion. But this much was apparently not obvious to Rep. John Fleming, R-La., who recently posted the Onion piece to Facebook as an alleged example of Planned Parenthood's offensiveness.

Others were not so easily fooled, and Fleming was soon the object of mockery on Hudson Hongo's blog, "Literally Unbelievable," which chronicles "stories from The Onion as interpreted by Facebook." Turns out people are even more gullible than you might think.

"Like many of my posts, this picture was submitted by one of my readers," Hongo tells me over email. "I'm lucky to have a readership that is quick-eyed and knows to always take a screenshot first." Hongo answered a few of my questions about his self-styled online "museum of human gullibility" -- and chose a few of his favorite moments from nearly a year's worth of amusingly unnecessary exasperation.

How did "Literally Unbelievable" begin? From your archive, it looks like it started around the same time the Onion's "Abortionplex" story first ran. Was that the inspiration?

Last May I heard the pro-life community was responding furiously to an Onion article about a proposed $8 billion Abortionplex and decided to investigate the response myself. The results were astounding: Not only were the reactions wilder and wackier than I could have imagined, I found they existed for nearly every Onion story, no matter how outlandish. In the beginning I was actually just keeping the blog as a personal archive of this stuff, but eventually opened it to the public as sort of a museum of human gullibility.

Is Fleming's misstep the most egregious example of a politician misunderstanding an Onion link that you can remember?

At the very least, it's the most embarrassing example of a politician reading the Onion sincerely, though their faith in the supposedly straight news organizations that read like satire is impressive in its own right. Also I have to give props to the Capitol Hill Police for "investigating [The Onion's] reporting" last fall.

Do politically themed Onion articles tend to get the craziest reactions? Or is there another general theme that inspires particular ire?

I definitely find that anything Obama- or right-to-life-related gets an especially fiery response. My speculation is that mainstream reporting about these topics has become so sensational that readers are really willing to believe anything that gets said about them. Also people seem to be waiting to hear that their tax dollars are spent on any number of bizarre projects or studies; if an Onion headline contains "Study Shows" or "Scientists Discover," you're certain to get some really agitated folks.

Asked to pick a few favorites examples of Onion stories people thought were real from the past year, Hudson spotlights the following entries: