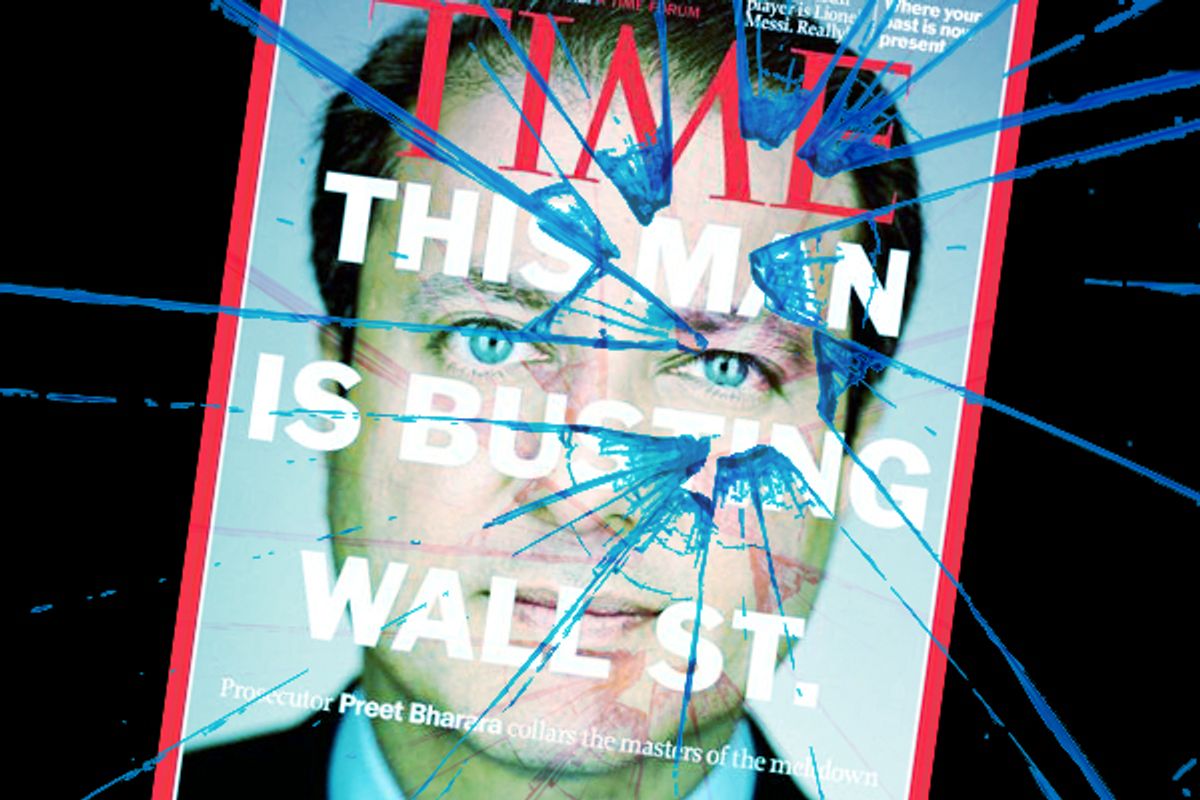 Two intriguing magazine cover stories are on the stands this week, on more or less the same topic. New York magazine shows a man clutching between his knees, with the headline: “The Emasculation of Wall Street.” Time’s cover has the impassive puss of Preet Bharara, the U.S. attorney in Manhattan, and “This Man Is Busting Wall St.”

Seeing these two covers side by side, you’d think that Bharara was Wall Street’s Great Emasculator. The Time article is subtitled “Prosecutor Preet Bharara collars the masters of the meltdown,” while the New York piece describes how the Street is reeling from “a crisis that would not be flip to call existential.” Yet nowhere in Gabriel Sherman’s well-researched piece in New York is there even one mention of Preet Bharara.

There’s a simple reason for that:  Preet Bharara is not busting Wall Street. He’s not collaring the masters of the meltdown. He’s done nothing to even slightly discomfit Wall Street's still-ferocious money machine, or has yet to bring to justice the architects, enablers and continuers of the 2008 financial crisis — the bankers who got us into that mess, and the ones who are continuing to extract pain from foreclosed homeowners, in the New York area and beyond.

As a matter of fact, his over-hyped insider-trading prosecutions, the main focus of the Time piece, are doing the Street a favor, by targeting people who actually ripped off Wall Street — individuals like hedge fund managers Raj Rajaratnam and Danielle Chiesi, who functioned a bit like the goons who used to dope race horses in the old days.

Bharara’s insider trading targets rigged the game for their own profit by illegally misappropriating information, in effect stealing from their employers and other investors, just as the horse-dopers cheated racetracks and other betters. Another analogy, also from the racetracks of old, would be to the scam artists who used to “past-post”: bet on races after they knew the outcome.

That’s how insider trading works. It’s a form of theft and cheating. It’s bad. Bharara was right to prosecute them, just as he has aggressively pursued drug gangs in the outer boroughs. But let’s be clear on something: The big players, the Goldman Sachses, Merrill Lynches, Banks of America and so on, don’t like insider trading any more than Preet Bharara does. And none of his criminal prosecutions to date — including his recent bust of three high-ranking former Credit Suisse execs, accused of rigging the value of mortgage bonds they held in 2008 — had any connection to the pain being felt by Americans today, which can be directly traced to the misconduct of mortgage bankers and derivatives traders in the run-up to the financial crisis.

The real perps of the financial crisis haven’t been in Bharara’s — or the Justice Department’s — cross hairs for a single moment since Barack Obama took office three years ago. It’s one of the most troublesome failings of his administration.

What almost upended the economy was not insider trading, but dreck. (Look it up.) Misleadingly marketed, overcomplicated subprime and Alt-A mortgages were sold to homeowners, often using fraudulent methods. Those dreck mortgages were then packaged by Wall Street as complex derivatives and sold to banks, large investors and insurance companies like American International Group. Along the way, the likes of Lehman Brothers utilized gimmickry to shunt their mortgage-dreck liabilities off their balance sheets.

It was a story of screw-ups and villains, whose screwing up and villainy have been described in a number of best-selling histories of the financial crisis, as well as the final report of the Financial Crisis Inquiry Commission. Insider traders just weren’t part of the picture. And if you don’t believe me, see if you can find one reference to Time’s so-called masters of the meltdown in the FCIC report, or even one mention of insider trading in that voluminous tome.

The financial crisis was the culmination of a fundamental conflict between the so-called financial services industry and the interests of society as a whole. To maximize their returns, and thus their bonuses, Wall Street firms ratcheted up their use of leverage and engaged in proprietary trading strategies that ultimately proved to be harmful to society, when those strategies failed. Government regulation failed to prevent them from hurting us. The result was a series of immensely unpopular bailouts conducted by the Federal Reserve and Treasury Department, which were forced to clean up the mess that they created.

Today, of course, the right has turned the facts of the crisis upside-down, turning it into a failure of government and not out-of-control capitalism. Dodd-Frank, now under attack from the Republicans —and dead meat if Obama is defeated — cut into leveraged-fueled trading strategies and, hence, bonuses. That law hit Wall Street where it hurts: in the wallet. While Dodd-Frank, the actual bane of Wall Street, has preventing the Street from hurting the rest of us by cutting into its earnings, Bharara was engaged in his insider-trading prosecutions, which were worthy and nice as far as they went, but never came close to throwing sand in the gears of the money machine.

So it’s a stretch, to say the least, for Time to compare Bharara with Eliot Spitzer, the New York attorney general of a decade ago. Spitzer actually impeded the way Wall Street did business, by assaulting the conflicts of interest that then abounded in the research departments of large Wall Street brokerage firms.

The same can be said for comparing him to his predecessor from the 1980s, Rudolph K. Giuliani. Though Giuliani in later years became a kind of megalomaniac self-parody, in his prosecutor days he went after genuine big wheels, Michael Milken and Ivan Boesky. None of the six Bharara targets arrayed across the top of pages 24 and 25 in the U.S. edition, their profiles tinged blood red, came anywhere close to rising to that kind of Gordon Gekko-like status.

Now, this is not to say that there aren’t some wide-awake prosecutors out there, ready to tackle real issues of concern to real people, and not headline-grabbing insider trading cases. There is at least one — in Boone County, Mo., where a grand jury just handed up a 136-count indictment against a home foreclosure service, DocX, for using forged documents against homeowners whose houses are being seized by banks.

Is Missouri a hotbed of foreclosure crime, and not the Big Apple?  Don’t make me laugh. In Brooklyn, the banks’ tactics are so sleazy that a New York State Supreme Court judge, Arthur M. Schack, has single-handedly fought against the banks’ sleazy tactics in foreclosures. It’s a job that really should be tackled by Bharara. This is a state, mind you, where the debt collection industry is so out of control that the New York state attorney general, the now-Gov. Andrew Cuomo, asked a judge in 2009 to throw out 100,000 faulty judgments against consumers who were victims of unscrupulous collectors.

The closest Bharara has come to tackling foreclosure fraud — the most serious, ongoing source of consumer pain to arise from the financial crisis — was his November 2011 suit against a mortgage broker for fraudulent lending practices. A civil suit, not a criminal case. As for the day-in, day-out practices that Judge Schack has been wrestling with in his courtroom for years: nothing so far.

I happen to think that Bharara is a decent guy, albeit with his priorities poorly chosen. If he starts going after the real bad guys he will finally deserve to get all the puff pieces he’s now inspiring. But for now, definitely not.