Rick Santorum will pay for this

The rule of the GOP race so far: No one threatens Mitt’s White House dreams and gets away with it 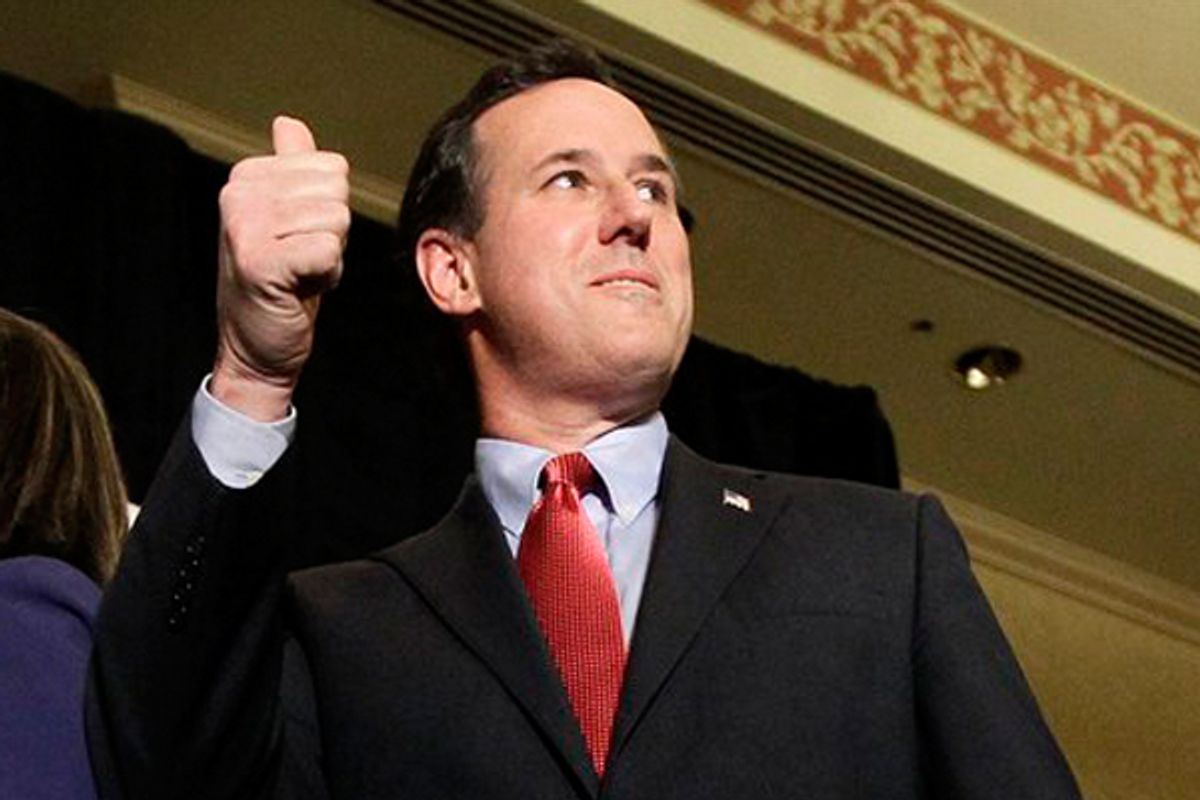 If one statistic explains why Rick Santorum was able to score such an impressive three-state sweep on Tuesday night, it's this: In all three states that voted -- Minnesota, Colorado and Missouri -- his favorable rating with Republicans stood at over 70 percent, well above the numbers for Mitt Romney and Newt Gingrich.

There was a very good reason for this: Romney left him alone.

After suffering a lopsided defeat to Gingrich in the Jan. 21 South Carolina primary, Romney's campaign and its super PAC friends steered their energy and resources into a blunt and relentless effort to tear him down. In ads, press releases and surrogate conference calls, the (many) low moments from Gingrich's run as House speaker in the late '90s were aired, and Romney himself used a debate to accuse his opponent of using "repulsive" and "inexcusable" campaign tactics. Gingrich fired back with venomous intensity, accusing Romney of having "a profound character problem" and branding him "a liberal who was pro-abortion, pro-gun rights, pro-tax increases and pro-gay rights" as Massachusetts governor.

Romney got the better of this fight, in that he killed Gingrich's post-South Carolina momentum, netted a commanding victory in Florida, and rolled into February in a strong position to leave Gingrich in the dust once and for all. But the Romney-Gingrich sniping also allowed Santorum to stand above the fray while pitching his message to Republicans in Minnesota, Colorado and Missouri, states that are culturally and demographically suited to Santorum and his message.

With no one attacking him -- and with Romney, whose campaign evidently believed that a February sweep could be attained at minimal expense, spending little money -- Santorum flourished under the radar in all three states. Polling in advance of Tuesday's contests was limited, and it only became clear in the final 48 hours that Santorum was poised for a big day. And even then, it seemed unlikely he'd win all three, much less by the margins he ended up enjoying.

In his victory speech, Santorum crowed that "tonight, we had an opportunity to see what a campaign looks like when one candidate isn’t outspent five or 10 to one." Which is true enough, but it also points to the main reason to doubt that Santorum's trifecta will vault him into serious contention for the nomination: He's got Romney's attention now -- which means that he's in for the same well-funded abuse that Gingrich endured as soon as he won South Carolina. Actually, the abuse began on Monday, when Romney's campaign realized that Santorum was going to do well the next day. But now it will intensify, with Santorum in position to use his impressive show of strength to further marginalize Gingrich and to emerge as the right's consensus alternative to Romney.

Apparently, Santorum will now make a play in Michigan, which will hold its primary on Feb. 28. The state is an appealing target for him; it's filled with the kind of blue-collar and middle-class voters Romney has struggled with elsewhere, and it contains a surprisingly sizable chunk of conservative evangelicals. It is Romney's native state, but polls have shown the former Massachusetts governor is at least theoretically vulnerable. After that, Ohio and the Southern states that will vote in early March could also be good targets for Santorum. On paper, he could do some serious damage to Romney in the weeks ahead.

But the GOP campaign will look a lot different in these states than it did in the ones that voted Tuesday night. Expect Romney to engage Santorum directly, as he did with Gingrich (the next debate is in two weeks), and expect his campaign and his super PAC allies to spend heavily, flooding the airwaves with the sorts of negative attacks that helped do Gingrich in. Romney's surrogates will get in on the act too. When Michigan's primary arrives in three weeks, it's just about impossible to imagine Santorum enjoying a 70 percent favorable rating in the state. Romney and his campaign are used to this by now: Every challenger who has suddenly surged into contention has fallen back to earth quickly.

Of course, some of those challengers made it awfully easy for Romney. Rick Perry's epically bad debate performances last fall turned him into a joke even among Republicans, deflating national poll numbers that had once hovered around 40 percent. And Gingrich -- well, where to start? It also helped that the GOP's opinion-shaping class, whatever it thinks of Romney, is largely united in the view that Gingrich would be a disastrous general election candidate. So when Romney essentially mugged him after South Carolina, most party elites were content to sit on their hands and pretend they didn't see anything; almost no one spoke up in Newt's defense.

Santorum is not as easy a mark. He's basically a competent candidate whose policy views are generally consistent and in line with those of the party base. The biggest knock on him, one that probably prevented him from breaking out earlier in the race, is that he came to the race on the heels of a landslide Senate reelection defeat in a key swing state. But now that he actually does have some traction, that might not matter for much. And if Romney comes after him in this month's debate, Santorum -- unlike Gingrich -- will probably be able to defend himself effectively and land some punches of his own. It's possible, then, that a Romney assault on Santorum won't produce the same dramatic results as the Gingrich takedown did. A key question is whether party elites will sit on their hands again this time, or if some of them will rally to Santorum's side and put the heat on Romney for running a negative race.

So while Romney will undoubtedly make Santorum pay for his victories this week, it remains to be seen just how steep the price will be.