As the social media giant opens a new campus nearby, East Palo Alto residents fear for their community's future 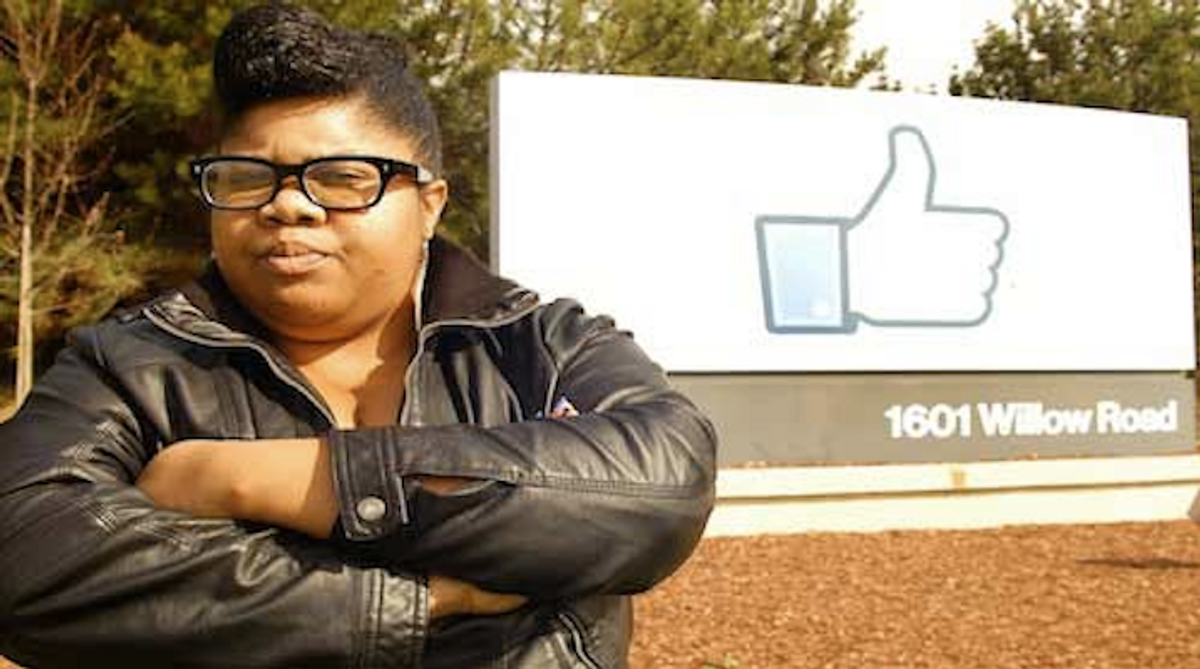 EAST PALO ALTO, Calif. -- A baby blue billboard displaying a giant thumbs-up hand, the iconic Facebook “Like” symbol, stands on the corner of Willow Road and the 84 freeway, facing Menlo Park. It marks the entrance into the new campus of Facebook, the Internet giant that just recently filed for an IPO, minted a new crop of multimillionaires, and has just moved into this newer, bigger home – the former campus of Sun Microsystems.

The Like sign may just reflect the sentiments of the city of Menlo Park, a mostly affluent suburb that is sure to receive a windfall in taxes from the arrival of its new tenant, which has made the city the new center of Silicon Valley.

But the sign is also turned away from East Palo Alto, a neighboring low-income community of color adjacent to Menlo Park. That city will be the gateway to Facebook for many commuters and may be the future home of some of the 9,000-plus employees who are expected to work at the new location. And while the rest of the Valley celebrates the expansion of the new company that is redefining how the world communicates and uses technology, East Palo Alto residents say they see more of the same: another powerful Silicon Valley corporation that will benefit at the expense, and perhaps displacement, of their city.

“No doubt they are doing the same ‘giving back’ as other Silicon Valley companies, and they get points for that. But maybe some of that is good P.R.,” says Carlos Romero, East Palo Alto City Council member, and current San Mateo County supervisor candidate.

“They have their bottom line to protect, and if they can move into an area and not pay to mitigate costs they create, they are going to do that,” he said.

The East Palo Alto costs Romero is referring to are the transportation and housing impacts that will occur with the influx of thousands of new Facebook employees to their region.

As obligated by the California Environmental Quality Act, Facebook conducted a draft Environmental Impact Report of its expansion for Menlo Park, the city of its residence. Despite the proximity and overlap of entering roads, the report did not address the environmental or potential housing displacement issues with East Palo Alto.

The East Palo Alto Community Development Department registered its dismay in a letter: “We are disappointed that the draft EIR does not adequately consider the potential impacts to the City of East Palo Alto, or consider potential mitigation measures to address those impacts.”

Through the EIR process, at the end of January, the City of East Palo submitted a collection of comments, from city officials, residents and civic organizations, expressing their concerns.

Facebook has three months to respond to each listed claim.

Yet even outside of the formal EIR process, a disagreement over the impact has developed along lines of housing displacement in East Palo Alto. In response to a letter from the City of East Palo Alto regarding the concern that thousands of new Facebook employees with higher incomes could drive out current local residents with less economic power, the company’s consulting firm, Keyser Marston Associates, is equivocal.

They write, “Impacts will be minimal if a very limited number of workers seek housing in East Palo Alto; conversely, if East Palo Alto is viewed as an attractive option by a large share of Facebook’s workforce, impacts would be greater.”

The response brief then goes on to say that Facebook employees are “unique” in that they are “younger, more affluent, more mobile, and newer to the Bay Area.” Consequently, the hipper Facebook employee would “be more interested in living in San Francisco to be joined in the ‘youth scene’ in the city.”

Romero contends the rationale defies logic, saying that even a fraction of Facebook employees living in East Palo Alto will impact its housing costs.

“Just a low estimate, say, 450 people, entering the housing market, that is going to have an impact,” he says.

East Palo Alto’s relatively small population attributes to the sensitive market. On last census count, East Palo Alto was roughly 30,000 residents, so the number of Facebook employees, estimated at 9,600 at full capacity, would represent a third of the city.

But even having a majority of Facebook residents living outside of the area can also be a problem, with an increased number of people using East Palo Alto as a thoroughfare to the new campus.

Anna Turner, a 27-year-old program director for Youth United for Community Action, an environmental justice organization, is a lifelong resident of East Palo Alto. She says the city’s neighborhoods are already overrun with Silicon Valley workers trying to avoid the larger streets such as University Avenue that connect Silicon Valley with the Dumbarton Bridge heading toward the East Bay. “University, which connects 101 to 84, has over 30,000 drivers during peak hours. It gets so packed drivers will take side streets, ignoring traffic signs, making life hard for residents.”

Her organization, along with others, has partnered with the city to form a sort of united front to ensure Facebook hears their concerns.

Though young, Turner is a veteran of East Palo Alto’s organizing history, well versed in EIRs, land-use issues and, more recently, housing and tenants rights. She says the Facebook move-in is yet another piece of a development pattern that is built for Silicon Valley, but with no considerations to the well-being of East Palo Alto.

She points to buildings such as Ikea, the high-end furniture store that prompted new traffic management strategies to accommodate shoppers; the posh Four Seasons Hotel, which required the paving over of the nerve center of East Palo Alto, known as Whiskey Gulch; and Romic, a toxic waste recycling business that was finally removed from the city after residents contended the company polluted the air for decades.

Most recently, Turner and her organization have been battling the monopolization of sales of apartments, as housing concerns skyrocketed with the foreclosure crisis. Her concern is that newer real estate companies such as Equity Residential, which just took over a major apartment complex of 1,800 units – making it the largest landlord in East Palo Alto -- may mow down the rent-controlled apartments to make way for a more affluent Facebook crowd.

Romero finds Turner’s perception that the East Palo Alto she grew up in is being developed away a common one – one only emboldened by the Facebook expansion. “The fear by many community members is that local residents will be left out of the economic environment that is improving, meaning displacement,” he says.

Of the concerns from East Palo Alto officials and residents, Facebook spokesman Tucker Bounds says, “We are hopeful that East Palo Alto sees the enormous benefits of our move. We are having an open dialogue to see how we can work together.”

When asked if the Facebook move has impacted her usage of the social media site, Turner, a youthful, connected, tech-savvy woman in her own right, says yes. “I ‘deactivated’ my personal page and don’t even check my business page.

“I mean, so many people use that site worldwide, and it’s amazing that here is the place where Facebook actually lives.”

Romero says he doesn’t use Facebook, though many people “he respects a lot” want him to utilize the device for his supervisorial campaign.