In defense of fact checking

A controversial writer and his fact checker battle in a new book. Too bad neither gets close to the truth 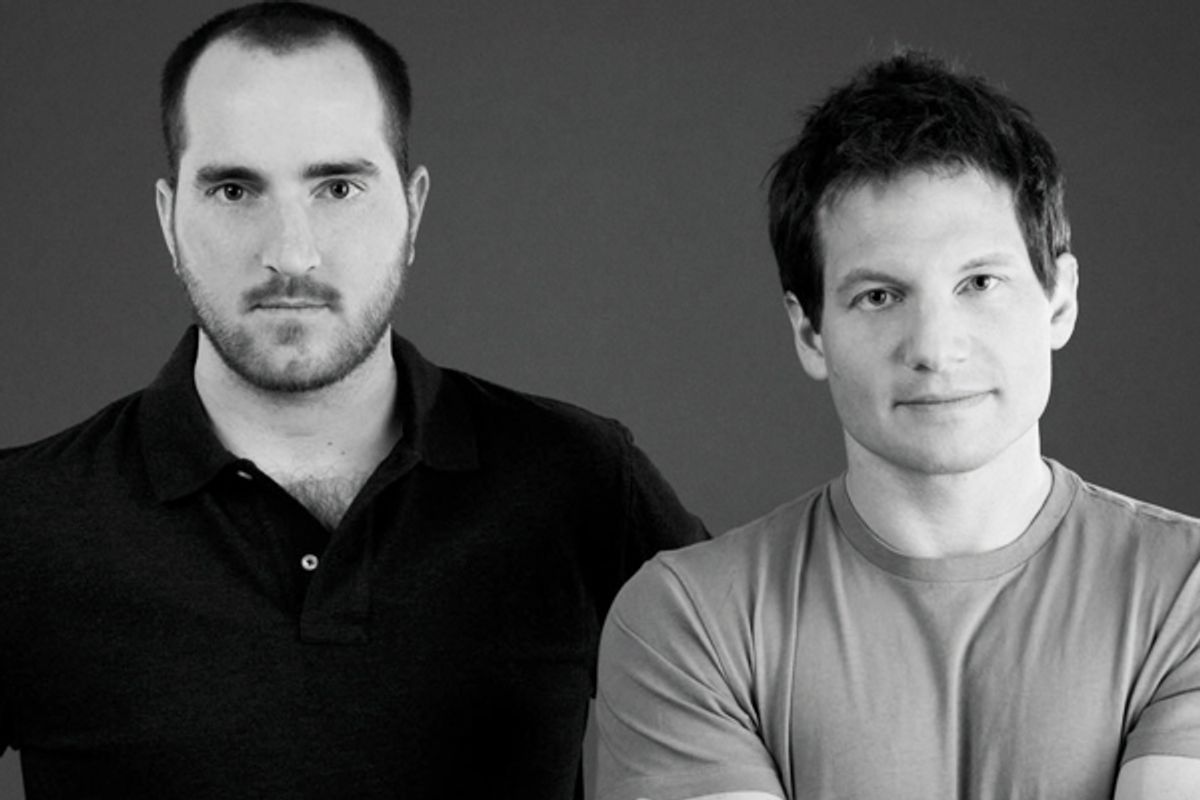 Fact checking is a subject that many people speak of with blithe confidence despite knowing very little about it. In truth, there's nothing like going through a 5,000-word story with an exceptionally thorough fact checker to make you aware of just how often all of us talk confidently about subjects on which we are completely, or mostly, wrong. What's obvious, what everybody knows, what's only common sense: Much of this stuff turns out, under scrutiny, to melt away into fable, propaganda and wishful thinking. And that includes a lot of what people assume about fact checking.

"The Lifespan of a Fact" by John D'Agata and Jim Fingal documents the epic fact checking of "What Happens There," an essay D'Agata wrote about a teenager who committed suicide by jumping from the observation deck of a Las Vegas hotel. Their exchanges merit publication in part because D'Agata is the leading light of a literary movement (largely confined to MFA programs in creative nonfiction) advancing the "lyric essay," a form that combines elements of poetry with the prose essay. D'Agata has been militant in asserting his liberty as an artist to alter, invent or ignore facts in writing his essays, as well as critical of the eruptions of outrage that greet the increasingly commonplace discovery that some celebrated memoirist has embellished or fabricated parts of his or her work.

If this face-off between a meticulous establisher of truth and a bold champion of poetic license strikes you as a bit contrived, then I say: well spotted! A provocative excerpt from the book appeared in Harper's last week, featuring each man performing his role to the hilt. Fingal pettifogs obsessively over whether there are 31 or 34 strip clubs in Las Vegas and D'Agata makes the absurdly highhanded pronouncement that "the rhythm of 'thirty-four' works better in that sentence than the rhythm of 'thirty-one,' so I changed it." Several of D'Agata's most dickish replies have been cherry-picked for inclusion.

This excerpt is not a fair representation of the book, but then the book itself is a travesty of the fact-checking process. The impression has been given that Fingal is a paid fact checker for Harper's, the magazine that originally commissioned D'Agata's essay. Actually, he was an intern for the Believer magazine, a literary journal that picked up the piece after Harper's declined to publish it and that encourages its interns to volunteer for ambitious projects and pursue them independently. When Fingal tells D'Agata, early on, "It's the job I was assigned to do, so I have to do it," he is -- ironically enough -- not being strictly accurate.

Any lingering impression that Fingal is a put-upon toiler in the boiler room of journalism dissolves as he introduces more and more tedious digressions and unfunny wisecracks into an ever-burgeoning pissing match. Many of Fingal's quibbles -- such as asking D'Agata for notes on a guided bus tour he took as a college student in 1994, or insisting that the mountains southeast of Vegas look "brownish" to him, rather than "black" as D'Agata described them -- are so over-the-top that the writer's snappishness becomes understandable.

Fact checking, contrary to vague popular perceptions, is something of an art; not only does each publication have its own policy for substantiating facts, but each checker has his or her own approach. Nevertheless, there are many constants. Fingal's method is eccentric, to say the least. For example, he tracks down and transcribes the National Institutes of Health's definition of a drug that one of D'Agata's quoted sources mentions only in passing, yet he never seems to have contacted any of the sources themselves, either to check their quotes or to verify their titles or biographical details. Much of what he does is unnecessary by even the most rigorous of magazine fact-checking standards (and glossy-magazine fact checking is as rigorous as it gets), and yet he neglects some basic techniques of verification.

D'Agata is no better advocate for his position. He offers the "rhythm" defense more than once, and when Fingal raises legitimate questions about his attempt to present suicide as a universal taboo across cultures and historical periods, he stoops to the retort, "Wow Jim, your penis must be so much bigger than mine." (Although it must be said that this is a pretty fair characterization of the tenor of their arguments.) It's not until late in the game that D'Agata engages Fingal in a substantive discussion of what he's trying to do, best stated as "taking liberties" to make "a better work of art -- and thus a better experience for the reader -- than I could if I just stuck to the facts."

The bonehead comments-thread response to this assertion is "There's a name for that: fiction." But there are enough confirmed facts in "What Happens There" -- real names, people, places and events -- that it doesn't constitute fiction, either. Of course, the whole dispute could be fairly easily defused by labeling D'Agata's work as a lyric essay and including an editor's note (for the many readers as yet unfamiliar with the genre) explaining that it contains factual material but is not restricted to factual material. That describes most contemporary poetry, after all. A magazine like Harper's might decide that it isn't comfortable publishing prose works of this kind, but no reader could claim to have been misled.

Such a reasonable solution, however, would severely reduce the opportunities to grandstand about how today's readers don't "have enough deep experiences with art to know that that is what art is for: to break us open, to make us raw, to destabilize our understanding of ourselves and of our world so that we can experience both anew, with fresh eyes," and so on. (Why is it that people defending purportedly innovative art always seem to fall back on the most shopworn cliches and the hokiest Romantic-hero narratives to do so?) D'Agata's rhetoric in this section of "The Lifespan of a Fact" is so overblown in comparison to the substance of his quarrels with Fingal that the effect is comical. The freedom to remove a "clunky" comma from the name of a school or to "streamline" quotes from a newspaper interview seems unlikely to catapult a piece from a pedestrian bit of reporting to a "an enactment of the experience of trying to find meaning."

Nevertheless, a case can be made for what D'Agata wants to do, and in his defense he maintains throughout "The Lifespan of a Fact" that he doesn't claim to write "nonfiction" or "journalism," and has never espoused or promised factual accuracy in his essays. However, he is (in "What Happens There") writing about the death of a real person, a boy named Levi Presley, and Fingal suggests that the "gravity" of this subject urges greater fidelity to accuracy in each detail. D'Agata replies, "The important thing here is the search for meaning ... I am seeking truth here, but not necessarily accuracy."

Here is the crux of the matter and one in which fact checking plays an overlooked role. When I first read "What Happens Here," long before I became aware of D'Agata's provocateur status, I could barely finish it, and abandoned the rest of the book. The authorial voice was insufferable -- preening and self-important. Many writers are indeed vain, but the good ones are able to keep this from infecting their work. Vanity has the effect of blinding an artist to the very truths D'Agata intends to pursue.

No genre scourges a writer's delusions of grandeur and omnipotence more fiercely than nonfiction. The fact checker is its whip. Yes, as Fingal discovers in the final pages of "The Lifespan of a Fact," even official records can contradict each other and sometimes the truth is impossible to determine. But most of the friction between D'Agata and Fingal in "The Lifespan of a Fact" doesn't involved disputed facts, only aesthetically inconvenient ones. D'Agata would prefer that his interpretation and depiction of reality not be encumbered by having to accommodate such facts. He thinks his essays are better because he refuses to do so.

What effect does it have on a writer to be constantly confronted with facts that interfere with his or her stories about the world? It can certainly be maddening, as many a writer subjected to the ministrations of an overzealous fact checker can testify. It can mean 30-minute conversations about utterly meaningless quibbles. Fact checkers can also save your ass, a service that may not mean much to someone like D'Agata, who doesn't care about being accurate, but which I have deeply appreciated every time I've benefited from it.

Mostly, however, fact checking -- not just the experience of being fact-checked but often the mere expectation of it -- makes you pay more attention to the world around you. It compels you to stop insisting on what you want things to be and to come to terms with what they are. It is, above all, a humbling experience, a perpetual process of correction that, far from instilling a false sense of certainty, makes you ever more alert to the myriad ways you can screw things up by falling in love with your own ideas or accepting a conventional truth at face value.

To me, this seems far more likely to break a person open and destabilize his understanding of himself and the world than hopping on D'Agata's magic carpet ride of Art. The pity is that more nonwriters aren't subjected to fact checking. It may not be fun, but it's good for you.