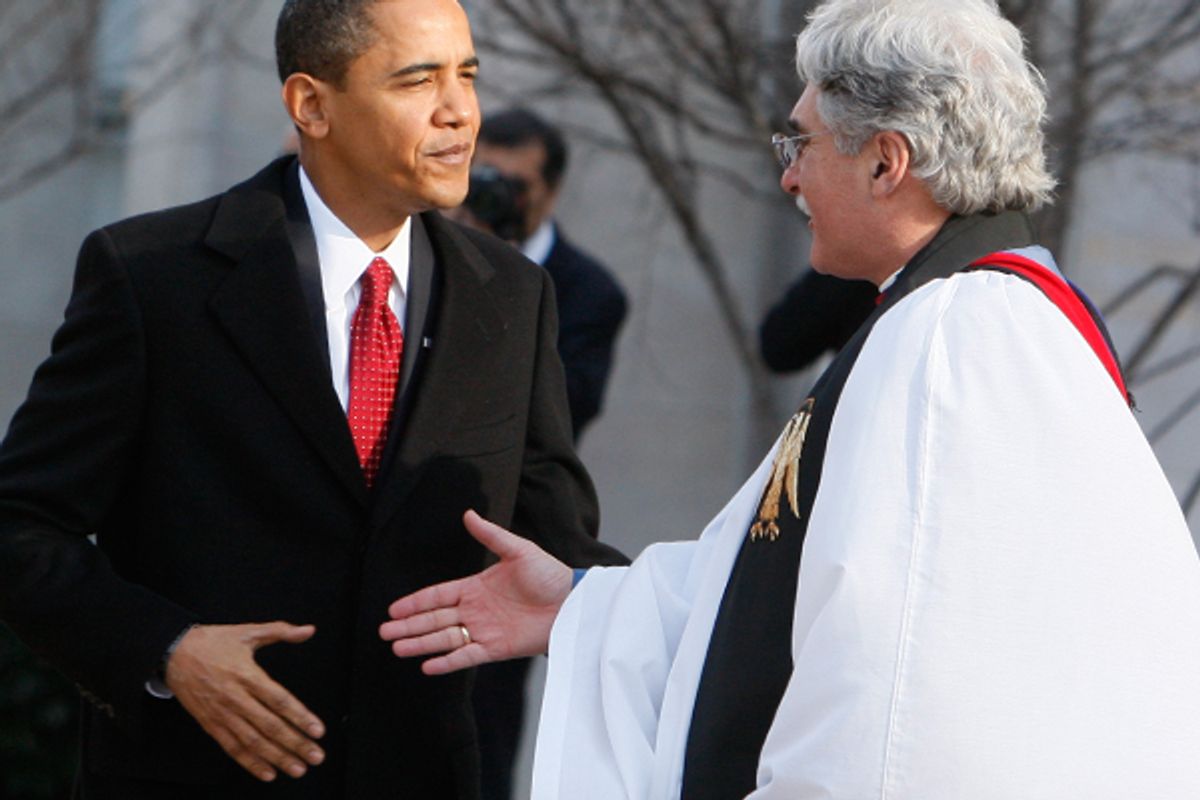 A special deal for the churches? (AP/Charles Dharapak)
--

President Obama's strategy of  “reaching out to” or “appealing to” religious voters has proven to be ineffective electorally and counterproductive for policymaking. As much as Obama seems to understand the complexities of American religion, he listens too much to the voices of religious leaders who want the government to accommodate their edicts regardless of the impact on everyone else. The spoils go to the ones with access, to those who sit in the valued “seat at the table” in Washington.

After decisively issuing the contraception coverage rule last week, the administration took only a few news cycles, dominated by liberal Catholics like E.J. Dionne fretting about how Obama “botched” the issue, to dispatch surrogates to assuage the U.S. Conference of Catholic Bishops.

“There are conversations right now to arrange a meeting to talk with folks about how this policy can be nuanced,” pastor Joel Hunter, a conservative evangelical who is close to the president, told the Washington Post on Tuesday. “This is so fixable, and we just want to get into the conversation.” The bishops promptly signaled that they would reject the floated compromise out of hand.

Obama would do better to govern and to run for reelection as a frankly secular candidate: the president who will ensure that policy is made based on reason and science, not religion. And he should make clear that he comes to this position precisely because he cherishes the free exercise of religion (or not) of all Americans. While this might cause indignation among some of those with a seat at the Washington table and set off fainting spells on cable news, it would not cause Obama to lose critical swing constituencies such as white Catholics or moderate evangelicals.

Getting into the conversation hasn’t been a problem for conservative Catholics and evangelicals. Obama’s signature faith initiative — the Office of Faith-Based and Neighborhood Partnerships — exists today largely in the form that these conservative religious leaders demanded. Back in 2008, candidate Obama nearly spelled the end of a carefully cultivated alliance with some religious leaders when he pledged in a speech to fix the constitutional inadequacies of George W. Bush’s Faith-Based Initiative. These livid religious leaders extracted a promise from the campaign: Don’t make a fuss about the speech now, and Obama will not make the changes he promised.

True to his word to the religionists, Obama has retained, among other things, a Bush-era rule, which permits faith-based organizations receiving federal aid to discriminate based on religion or religious belief in hiring employees. Because the rule remains in place, such taxpayer-funded, religious organizations can fire or refuse to hire applicants based on their religion, or even for being the sort of person their religion considers sinful, like a lesbian or a single mother.

Obama’s refusal to budge on this issue has infuriated advocates for church-state separation (many of whom represent religious organizations and/or are ordained clergy in the Coalition Against Religious Discrimination) for his entire White House tenure. But Obama knows that without the ability to discriminate in hiring, many of the biggest recipients of federal dollars (who euphemistically call this “co-religionist hiring”) will walk away from the faith-based project.

Good riddance, you might say, if they’re using your tax dollars to discriminate. But Obama the constitutional lawyer has been swallowed whole by the religionists on this issue.

Regardless of his stance on religion, the reaction from the fever swamps — the conspiracy theorists who insist he’s a Muslim or a secret agent of a special anti-American branch of Kenyan socialism, or Newt Gingrich, who claims he is a “secular socialist” — will not go away. Even after the supposedly respectable enclave of the National Prayer Breakfast, Obama was disparaged by conservatives for deigning to acknowledge the similarities between Christianity and other religions. He was abused for his suggestion that Jesus had ideas other than succeeding in business without really trying.

Never mind that Obama fondly recalled a visit with Billy Graham, or made note of which evangelical pastors he prayed with. There’s no winning the Christian exceptionalists. Mark Joseph, writing in the National Review, derided Obama for not realizing that the speaker who preceded him, Veggie Tales alumnus Eric Metaxas, would preemptively mock the president with his critique of “phony religiosity.” But for conservatives, Metaxas’ speech was even more damning than a dig at Obama’s supposedly less than rigorous Christianity.

The Obama administration — not unlike its predecessors of both parties — looks out with blinders at the religion landscape. The blinders extend no further than the religious groups with lobbyists (like the bishops) in Washington, who claim to represent their entire religion, even when, for example, 98 percent of Catholic women don’t seem to care that the bishops insist contraception is a sin. As a recent study by the Pew Forum on Religion and Public Life showed, the money to lobby can buy you access to ensure your religious views — even if they contradict medicine, science or public health — shape policy. As Catholics for Choice has pointed out, though, Archbishop Timothy Dolan doesn’t represent all American Catholics, but rather the 271 American bishops.

I recently was talking with a friend, whose 84-year-old mother, a lifelong and devoted Catholic, recently stopped going to Mass. She was fed up, he said, with the “anti-Obama” lectures she heard at church. I would love to see Obama invite my friend’s mother — from a Midwestern swing state, by the way — to the White House for a meeting.

The religious outreach gurus will no doubt ask, How many people does she represent? Oh, I don’t know. Tens of millions?