The banks don't get the punishment they deserve, but the White House finally gets some traction on housing woes 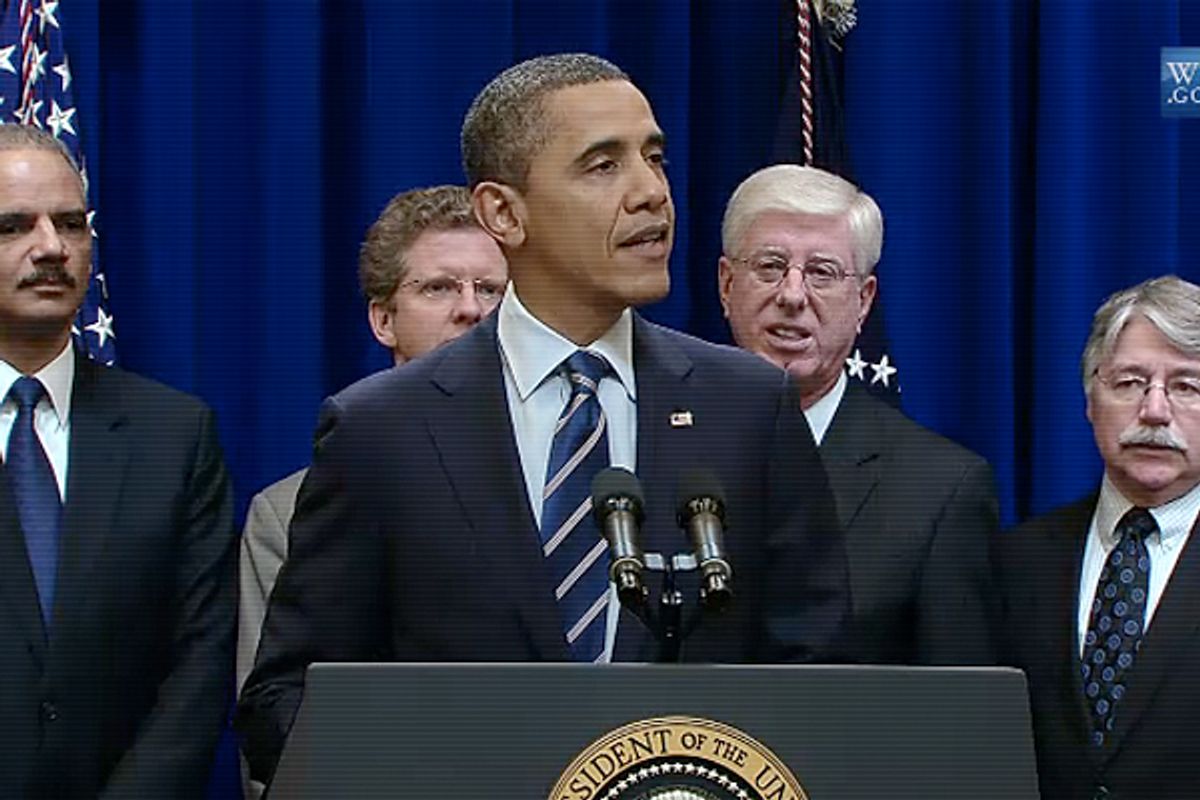 The first thing to understand about Thursday's much ballyhooed $26 billion foreclosure fraud settlement between five big banks, the federal government and 49 states is that it is nowhere near as big of a deal as it is being made out to be. You can safely ignore the claim that the torturously negotiated settlement is the heftiest financial punishment of industry by government since the landmark multistate tobacco deal in 1998 or President Obama's declaration Thursday morning that it is the "largest joint federal-state settlement in our nation's history."

Not only does the foreclosure deal add up to peanuts compared to the $350 billion tobacco settlement, but it also pales before the size of the problem that it is theoretically supposed to address. The amount of negative equity held by Americans in their homes is currently calculated at around $700 billion. As a result of the foreclosure settlement around 750,000 Americans who lost their homes to foreclosure will receive checks of around $2,000 and another million homeowners will see the size of their outstanding loans reduced by an estimated average of around $20,000. Sure, any additional stimulus will be sorely appreciated in today's demand-constrained U.S. economy, but a $2,000 check isn't going to make up for a foreclosed home, and it is silly to think the banks will feel more than a slight pinch. The banks have already reserved enough capital to cover the checks that they are going to have to cut (around $5 billion). Compared to the damage caused to American families by both the financial crisis and the rush to foreclosure, the banks are getting off easy.

Obama may be technically correct to say that the settlement "will deliver some measure of justice for some families who have been victims of abusive practices," but it's wrong to treat the news as any kind of real payback for bank misdeeds. It's just nibbling around the margins.

So is it a sellout -- "another raw demonstration of who wields power in America," as Naked Capitalism's Yves Smith, -- undoubtedly the harshest critic of the Obama administration on housing policy and bank reform -- argues? That's a little harder to say, and a lot depends on the future course of events.

Some defenders of the settlement are arguing that the size of the deal is smaller than it might otherwise be because the government has retained the right to sue the banks for a wide variety of mortgage-related bad behavior stretching beyond the fraudulent processing of foreclosure paperwork at the heart of this deal. In particular, the states attorneys general of New York and California can continue their own separate investigations. As Felix Salmon writes, "other big-money lawsuits over securitization can and almost certainly will still be brought — which means that the big banks all still have significant litigation risk hanging over their heads." As if to punctuate this point, on Wednesday night, the Wall Street Journal reported that federal regulators plan to sue some of the largest banks on charges of fraud related to the dodgy securitization of mortgages in 2007 and 2008.

The proof of this theory will only come when we see how hard the Obama administration and states like California go after the banks in the future. Given the track record of this administration, that may be doubtful. (Although, it may be worth noting that at least one conservative critic of the settlement, Douglas Holtz-Eakin, bases his critique precisely on the fact that banks still can't put the whole crisis behind them. The administration can't leave well enough alone, complains Holtz-Eakin, or "resist the political temptation to rouse its base with finger-pointing and lawsuits.")

A more interesting question to consider, however, is how the housing relief contained in this settlement fits into other administration housing policy efforts currently in the works.

First off, government negotiators are still working on roping another nine mortgage providers into the deal, which could raise the overall settlement total from $26 billion to around $40 billion. In March, the rejiggered HARP refinance program will kick in, presumably allowing hundreds of thousands of homeowners to refinance at currently rock bottom mortgage rates. There is also strong pressure coming from the Federal Reserve and the White House to convert currently unoccupied foreclosed homes owned by the Fannie Mae and Freddie Mac into rental properties, a step that would remove excess inventory from the housing market.

Each individual nibble here is unlikely to make a profound difference, but taken together, all these initiatives add up to the most concerted effort the Obama administration has taken to date to bring relief to the housing sector. It's also worth noting that it's all happening without any help whatsoever from Congress. The approach does not address the desire for punishment that so many would like to see meted out upon the banks, but it will likely help spur additional economic growth. At a point when the economy already seems to have solid momentum toward recovery, every extra bit of help is gravy.