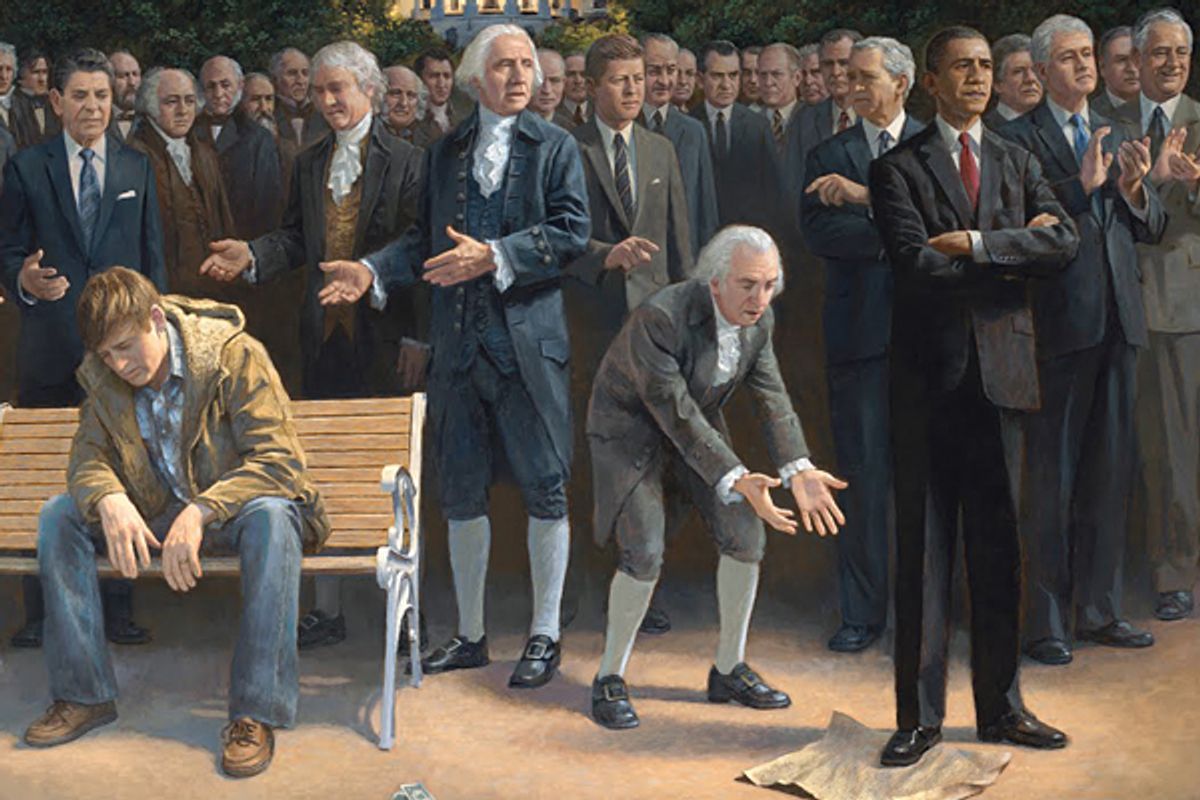 For many progressives, Shepard Fairey's HOPE poster now evokes the same riot of emotions that comes from picking through photos of a friend taken before an epic falling-out or of parents before a divorce: regret, anger, queasy self-consciousness, a stray pang of old joy.

But, in its day, the tricolor masterpiece of Barack Obama did its work magnificently. Fairey's genius innovation was to flavor hearty, comfort-food nationalism with a bright dash of counterculture. His aesthetic, a May-December marriage of social realism and post-millennial stencil graffiti, borrowed from the protest art of two generations. In cribbing the signifiers of rebellion, the screen-painted image exalted a simple wish for a better tomorrow to the level of a radical act -- all while making the slyest wink at the inescapable ridiculousness of campaign posters. And, of course, in Obama's abstract, almost Fauvist face, progressives saw not just their candidate, but themselves: youthful, noble, sophisticated, iconoclastic and superlatively patriotic. The man was modern.

But progressives have no monopoly on political art. Last week, a realist painter from Utah, Jon McNaughton, offered a different take on Obama. A veteran of landscapes and religious tableaux, McNaughton caught the blogosphere's attention when his 2010 work "The Forgotten Man" showed up on Rachel Maddow's blog, as an entry in a caption contest. The painting depicts President Obama standing, arms crossed, on top of the Constitution, while a distraught James Madison, backed by a legion of fellow presidents, pleads for him to stop. To Obama's right, a blond-haired, jut-jawed giant -- the titular Forgotten Man -- sits slumped over on a park bench. In the background, the White House stands, its flag at half mast, beneath menacing storm clouds (which McNaughton, writing on his website, says represent the federal deficit). A YouTube trailer that McNaughton did after he completed the painting now has 3.5 million hits. Salon caught up with McNaughton by phone at the McNaughton Fine Art Gallery in Provo, Utah.

Your painting has struck a nerve. How are sales?

Oh, they've just gone through the ceiling. We've probably had a 100-fold increase. Our website crashed, so I've been taking orders over the phone.

You used to paint mostly landscapes, then your art took a political turn. Why?

On your website, you say you're not partisan, but there's Obama trampling on the Constitution, and you have Franklin Roosevelt and Bill Clinton clapping in the background...

I also have George W. Bush standing behind Obama, grouped with them. It's more about who's for big government, not who's a Democrat or Republican. They're also all kind of looking off in the distance, instead of at the Forgotten Man. I did that to imply they have their own vision of what they want America to become.

I notice Reagan isn't over in that group. But didn't the debt increase a couple trillion on his watch?

I'm not saying he's innocent. As I note on my website, he says the debt he accrued was the biggest disappointment of his presidency.

I've seen your website. Your work is exceptionally well-annotated. [McNaughton's site has an interactive feature for the larger painting, where you can scroll your mouse across the paintings and little explanations and notes on who everyone is will pop up.] Does explaining art rob it of its mystery?

I want people to understand exactly what I mean by it. Some people will just take it at face value, but those who dig a little deeper will find all these layers of meaning, of metaphor.

And the metaphor in the Forgotten Man?

The Forgotten Man is the the average American -- every man, woman and child -- who may not have the same opportunities in the future because of what our presidents have done, which strays from the original intent of the Constitution.

Obama standing on the Constitution represents his taking action against what the Constitution stands for, which, to my mind, is limited government. I wasn't trying to make fun of Obama I tried to paint him in a very serious manner. He understands the Constitution and he knows exactly what he's doing.

I mean, he was a constitutional law professor.

And that's the irony. [laughs]

Several of your paintings, like "One Nation Under God" [in which Jesus holds aloft the Constitution, while, at his feel, various American archetypes sit in two groups, Last Judgment-style -- a Marine, a schoolteacher, a farmer and a minister on the left, a news reporter, a professor, a politician, a lawyer and a weeping Supreme Court Justice on the right] draw a strong link between religion and politics. How does that square constitutionally?

I don't have an issue with separation of church and state. I just believe the Constitution is divinely inspired and our Founders were inspired by God.

The Forgotten Man is very handsome. Who's the model?

[Laughs] I've got a close friend I use. I'm not ready to reveal him yet.

He's got that look of abject despair down pat, with those hunched shoulders ...

The college student in "One Nation Under God" is black.

Yeah, in that bottom left-hand corner, that's the one part I tried to show the actual percentages of different ethnicities in America. I've got a black man, a Latino, an Asian. I kind of like the idea of having a black college student, holding that particular book.

It's called "The Five Year Leap" [by the anti-Communist author Cleon Skousen]. It explains that our Constitution was divinely inspired.

That professor clutching "The Origin of Species" looks a lot like Jonathan Franzen.

Who's that? Is he an actor?

He's a writer. He wrote that book "Freedom."

Should art be political?

If it's an artist's individual expression, sure, why not? I've had people accuse me of making propaganda. It's a nice word to throw out there. It brings to mind posters from Nazi Germany and Chairman Mao and stuff of that nature. But those were commissioned by a state. I'm just an American citizen expressing his own views under the First Amendment. I'm not doing this for anyone but myself.

Speaking of world leaders, in "Wake Up, America" [a sequel to "The Forgotten Man," in which a beaming Obama, showered with money, addresses a group of supporters, unaware that they are being wrapped in chains; the Forgotten Man is shown taking a hacksaw to the chains] you've got a whole row of them watching Obama, looking pretty happy. Kim Jong Il, Putin, Ahmadinejad, King Abdullah, Hu Jintao -- and is that Ben Bernanke and Tim Geithner? How'd they get in there?

Well, you know, Bernanke is the Federal Reserve chairman, which manipulates the dollar, which affects the inflation rate and the national debt. I agree with a number of Ron Paul's critiques.

On your blog you say you're a Ron Paul man.

No, I wrote that I like Ron Paul. There are things I like about all of the candidates and things I don't like. Ron Paul is the one who I probably identify with the most because he's a constitutionalist.

Who buys your paintings?

Conservatives. I've noticed a change in the art market the last few years. You used to paint pictures for people to decorate their homes with; now people want art that speaks to what they truly believe. They don't care whether it matches their couch.

I have this idea that conservatives tend to eschew most art because they consider the art world the providence of elites.

Well, look at the NEA and how they've promoted out-on-the-fringe modern art and even some contemporary art -- Mapplethorpe, for example -- that's very offensive to Christians. That kind of thing has created this resentment among conservatives that the art elite is out of touch with the average person. I think there's room for all kinds of art -- modern, contemporary, traditional. Maybe I have a different perspective than most conservatives because I'm an artist, but you wouldn't see that in the music industry. They accept everybody. It'd be like someone who does jazz music walking up to a country music artist and being like, "You don't do real art."

Do you feel locked out from that establishment?

I don't really care. But when I was an art student I was kind of frustrated because I was trying to get help as a traditional artist and I wasn't finding it. A lot of my classmates were doing contemporary art, as were my instructors. I was kind of rebellious. I wanted to do my own thing and it was frowned upon because it was representational. Fifty years ago, it was the rebels who were doing modern art.

What are you painting now?

The title is "One Nation Under Socialism." It's a political one.

Matthew Wolfe‘s work has appeared in The New York Times, New York, and The Nation. He can be reached at matthew.m.wolfe (at) gmail.com.