Can the 1 percent accept "enough"? 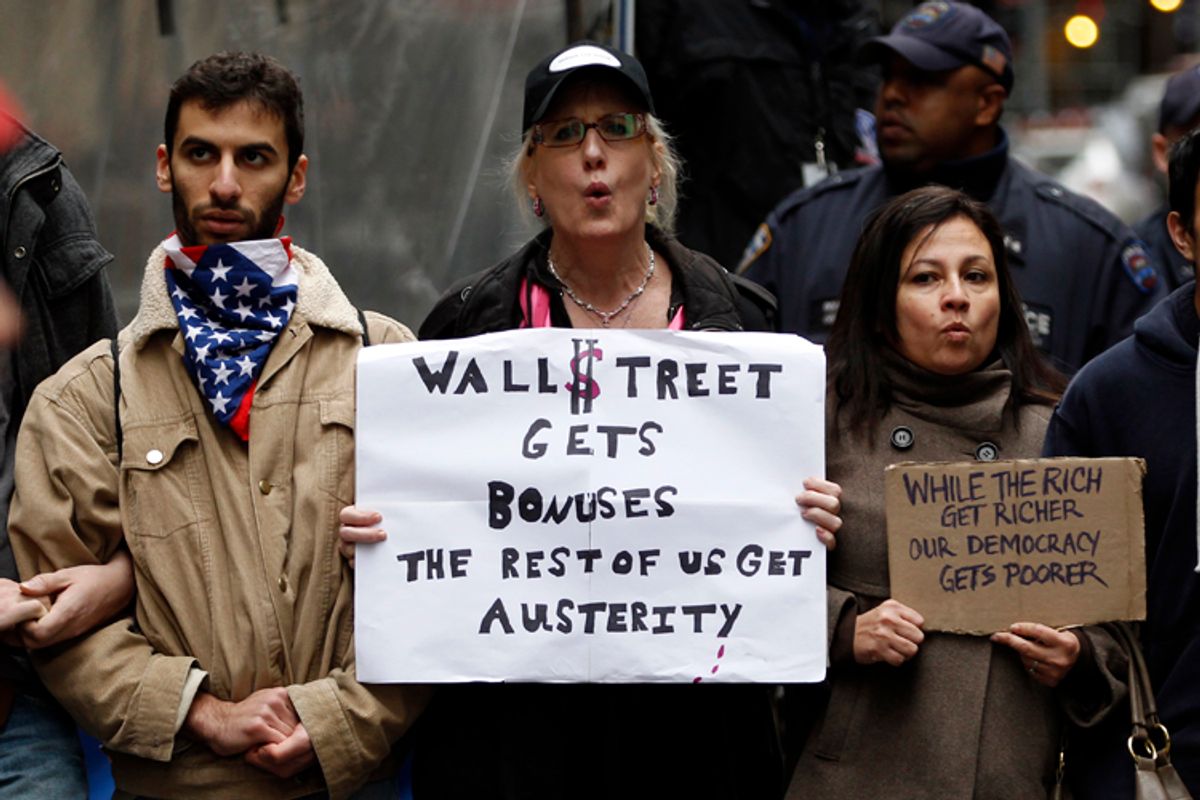 Of all the no-no's in contemporary America -- and there are many -- none has proven more taboo than the ancient doctrine of dayenu. Translated from the original Hebrew, the word roughly means "It would have been enough." The principle is that a certain amount of a finite resource should satisfy even the gluttons among us.

I know, I know -- to even mention that notion is jarring in a nation whose consumer, epicurean and economic cultures have been respectively defined by the megastore, the Big Mac and the worship of the billionaire. Considering that, it's amazing the word "enough" still exists in the American vernacular at all. But exist it does, and more than that -- the term's morality is actually starting to suffuse the highest-profile debates in the public square.

After the financial meltdown, for example, Congress witnessed an unexpectedly spirited fight over enacting pay caps at bailed-out financial institutions. Beneath the overheated rhetoric, the brawl revolved around determining how much is enough to compensate Wall Street's government-subsidized scam artists.

Today, that conflict has metastasized into a battle over taxes. Marked by mind-numbing arguments over Mitt Romney's IRS returns and esoteric catchphrases like "Buffet Rule," the skirmish is really just a proxy war over how much individual income we are going to collectively deem "enough" before the next dollar of income is subjected to a less preferential levy.

Even at the state level, "enough" has gone mainstream, as Democratic New York Gov. Andrew Cuomo just signed an executive order barring state contracts from going to firms that pay executives more than $199,000 a year. Again, the idea is that such a salary is more than enough to attract skilled workers to taxpayer-funded firms.

Academia, by contrast, is playing host to the flip side of this long-overdue discussion, as tuition and athletic controversies highlight the absurdity of the "not enough" argument.

At the University of Colorado, for instance, oilman-turned-president Bruce Benson recently floated the "not enough" rationale in defending a $49,000 raise given to an administrator already being paid $340,000 a year. "I've got to pay for good people," he said, implying that such a huge salary boost, paid for by massive tuition increases, was barely enough to keep the university competitive.

Similarly, USA Today recently reported that new college football coaches now make an average of $1.5 million a year -- a 35 percent year-over-year increase from their immediate predecessors’ average of $1.1 million. Though Republicans regularly claim public employees such as teachers, police officers and firefighters are paid exorbitant salaries, the GOP almost never notes that coaches tend now to be, by far, states' highest-paid public employees. Coaches retain that status in the face of budget pressures because school administrators constantly insist that they never have enough coaching-salary money to retain the best talent.

In all of these conflagrations, the forbidden six-letter word -- "enough" -- is the omnipresent ghost raising necessary-but-uncomfortable queries such as: Is a million dollars enough before one faces slightly higher taxes? Is $199,000 a year enough for a government contractor? Is $350,000 a year enough to attract a "good" university administrator? Is $1.1 million a year enough for a college coach?

It's a shame such self-answering questions even need to be asked. But with Gallup's latest poll showing most Americans believe a $150,000 annual salary makes one "rich," it's clear most of us would probably respond with an emphatic "yes" to all of them. That's because most of us know what "enough" is. Now it's just a matter of openly embracing it and finally replacing the era's ethos of greed with a much-needed spirit of dayenu.