How you know Obama is winning

Against the backdrop of good economic news, the annual CPAC hysteria and insults don’t have quite the same sting 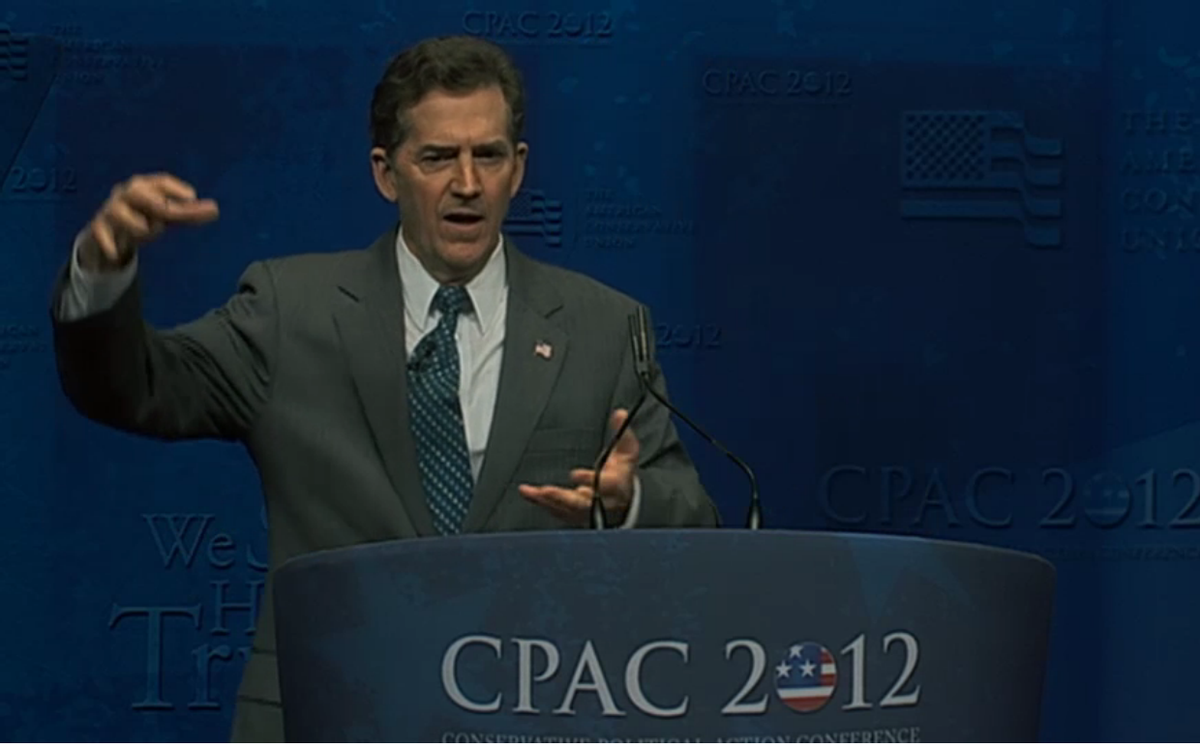 As long as Barack Obama occupies the White House, the annual Conservative Political Action Conference will be defined by alarmist hysteria, confident declarations that the public is turning or has turned on the administration, and cheap shots at the expense of a caricatured version of the president.

So it's not at all surprising that this year's conference opened on Thursday with a parade of teleprompter jokes, a plug for Dinesh D'Souza's "The Roots of Obama's Rage," and apocalyptic warnings like the one from Georgia Rep. Tom Graves, who told attendees that reelecting Obama would be akin to ending "this great story we call America." CPAC crowds -- and, really, grassroots conservatives across the country -- have been delighting in this sort of talk since Obama took office.

But there is a subtle difference this year. At previous Obama-era CPAC gatherings, it was easy for the conservatives in attendance to convince themselves that their contempt for and resentment of the president was shared by the majority of their fellow Americans. But the task is a little tougher now.

Obama's first term, after all, has been dominated by economic news that has generally ranged from brutally bad to barely encouraging. He took over with the economy hemorrhaging jobs, and a genuine, robust recovery has been slow to take hold, with false starts along the way. Popular anxiety and pessimism have been rampant, and voters didn't give Obama much of a honeymoon before pinning the blame on him -- if not for causing the mess then for failing to make it all go away. That's just how politics works, with a president's popularity tied to swing voters' view of the economy.

But this also allowed conservatives to gather at CPAC in 2010 and to hit all of the anti-Obama notes that were voiced on Thursday -- and then to be rewarded with a massive midterm landslide months later. And it allowed them to gather again in 2011, hit the same notes, and bask in the knowledge that Obama's reelection prospects were shaky at best

As they arrived in Washington this year, though, CPAC-goers faced a slightly different set of circumstances -- namely, five straight months of declining unemployment, a surge in new job creation in the last month, and a small but undeniable uptick in Obama's poll numbers. For the first time since Obama took office, there seems to be significant and sustained good news on what Americans overwhelmingly regard as the most important issue. Granted, it could be a mirage, with another wave of bad news just around the corner. But if the recovery persists, the anti-Obama right will soon discover that the average swing voter's frustration with the president is far less personal and far more reversible than the average CPAC-goer's.

The problem that an improving economy poses for the GOP was evident when Sen. Jim DeMint spoke on Thursday. Crammed into his 22-minute address was a grudging acknowledgement that things seem to be getting better:

This president is saying he’s creating jobs.  But folks, anything good happening in our economy right now is the result of Americans working hard, businesses trying to dig out from what this government is doing. There is nothing this president has done that makes this economy better.

That's the kind of argument that just won't work with swing voters who believe the economy is improving. Those voters, by and large, never disliked Obama as intensely as the attendees at CPAC and are still ready and willing to give him credit if they detect a real turnaround. But it's the sort of argument DeMint and the rest of the GOP may well be stuck with, and it calls to mind the predicament that Bob Dole faced when he ran against Bill Clinton -- and an economy that was vastly stronger than it had been four years earlier -- in 1996. At one of the fall debates, Dole was asked if the country was better off than it had been when Clinton was elected:

DOLE Well, he's better off than he was four years ago.

CLINTON: I agree with that. That's right.

DOLE: And I may be better off four years from now, but I don't know. I looked at the slowest growth in the century. He inherited a growth of 4.7, 4.8 percent. Now it's down to about 2.4 percent.

We're going to pass a million bankruptcies this year for the first time in history. We've got stagnant wages. In fact, women's wages have dropped 2.2 percent. Men's wages haven't gone up -- gone down. So we have stagnation.

For the first time in history, you pay about 40 percent of what you earn, more than you spend for food, clothing and shelter combined, for taxes under this Administration. So some may be better off.

At one point, Clinton looked at Dole and simply said: "It's not midnight in America, senator." Americans agreed, and the election was a snoozer. Clinton's experience is worth keeping in mind now. The right's animosity toward him was just as intense as it is toward Obama, and the tone at CPAC in the early- and mid-'90s was the same as it is now. When Clinton's approval rating slid down to the low 40s and his party lost the House and Senate in 1994, conservatives told themselves that their fellow Americans looked at the man in the White House and saw exactly what they saw. But when Clinton ran for reelection with the economy booming, they found out this wasn't -- and had never been -- the case.

On Thursday night, I talked about CPAC and how the GOP is grappling with the recent burst of good economic news on MSNBC's Politics Nation with Al Sharpton. Here's the full segment: