Mexico City does it right

Bleachers in the arrivals lobby -- brilliant. Plus: The funniest thing ever written 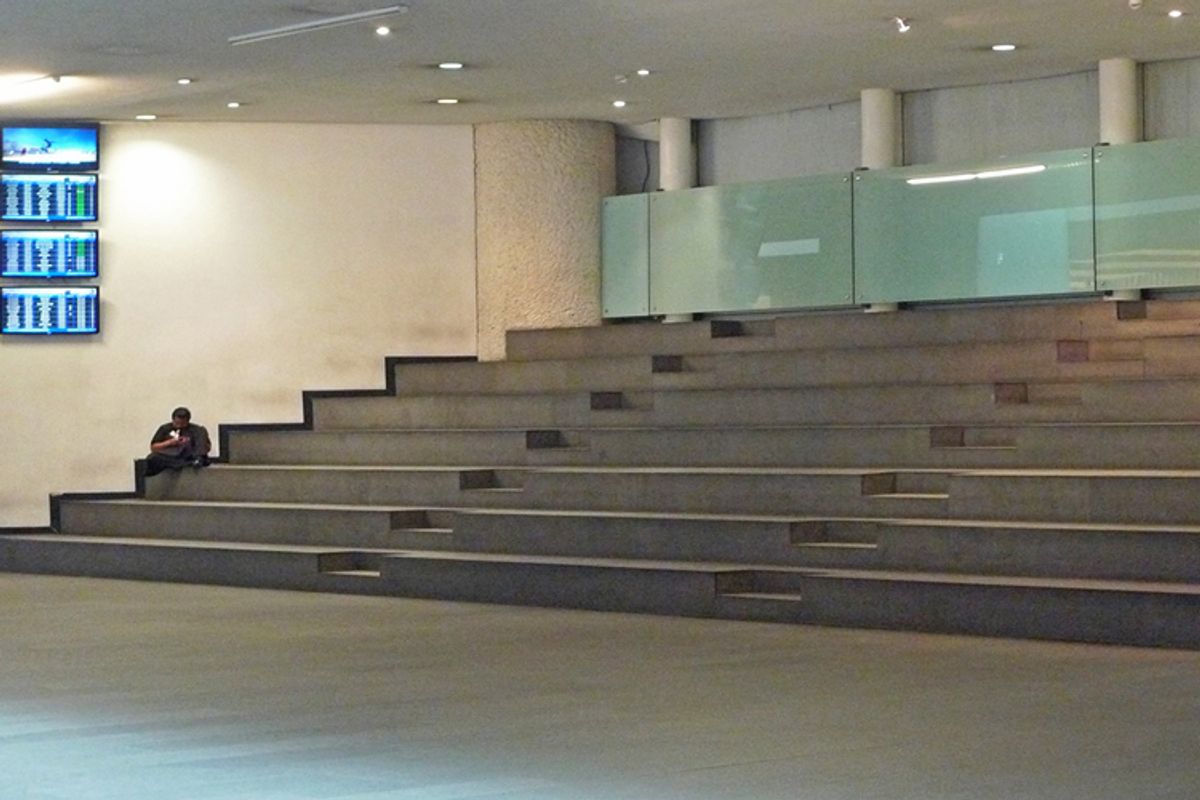 For those of you in the Boston area, I'll be appearing this Sunday, Feb. 12, at 12:15 p.m. at the Boston Globe Travel Show at the Seaport World Trade Center. I'll take questions from the audience, and will be interviewed by Alex Beam, the longtime Boston Globe columnist and author of the Funniest Thing Ever Written.*

This is your chance to hear me repeat all of the things I've been saying for years in my column, except live and in-person, and have your expectations shattered when you discover that the big-shot swashbuckling Pilot is actually just some slouchy old bald guy with a lousy attitude and a terrible speaking voice. Say it isn't so!

I'm thinking maybe I'll just show some travel pictures instead of talking about airlines.  Or hook my iPod up to the speakers and play some Grant Hart songs.

There will be a meet-and-greet sort of thing afterward. I accept cash, checks and gift certificates, plus canned goods and other non-perishables.

* The Funniest Thing Ever Written is exactly that. It's a line from one of Alex Beam's columns back in the fall of 2000:

Beam is discussing Applebee's, the restaurant chain. "On Sunday night," he writes, "I ordered Applebee's new specialty, Santa Fe Stuffed Chicken. My solicitous and friendly waitress kept asking me if it tasted 'too spicy.' I didn't have the heart to tell her it tasted like something NASA might feed the astronauts on Cinco de Mayo from festively decorated tubes."

That's it. That's the Funniest Thing Ever Written.

The Second Funniest Thing Ever Written is, I think, a tossup. Option 1 is the entire contents of the old Whitehouse.org parody site, edited by John Wooden, now archived here.

Option 2, infinitely lesser-known, is a small, hand-stapled booklet that I've owned for more than 20 years.

The booklet, 34 pages long, is titled "A Guide to Harvard University Dining Services." It's a parody created by two Harvard students, Samuel David and Sanders Metcalf, that was surreptitiously inserted into the university's freshman welcome package in 1988. There's no point in quoting the material here -- I wouldn't know where to begin -- but it's been 24 years since the last time I was able to look at a potato without laughing.

Google tells me nothing about David or Metcalf. (I'm thinking maybe the names were fake, or somehow juxtaposed?) If there's any justice in the world they went on to make a fortune writing comedy somewhere. Wherever they are, they should know their long-ago efforts are savored to this day -- at least by me.

Right, so where am I going with all of this? Heck if I know. I should probably say something about airplanes or airports, though, before signing off for the weekend.

I was back in Mexico City again, a week or so ago. Terminal 2 at MEX is a peculiar structure, with its giant Dixie cup planters, Swiss cheese facade and overzealous security guards.  One feature, though, is nothing if not brilliant. I'm talking about the bleachers you see in the photo above.

At most terminals the international arrivals lobby is a chaotic place. People crush around the doors, elbowing and jostling and craning their necks, waiting for friends or loved ones to emerge from the customs hall with their bags. At MEX they've eliminated much of this chaos with this unique, stadium-style waiting area. It keeps people from randomly milling around, and gives them a bird's-eye view of the lobby.

How cool is that? (The photo was taken on an unusually quiet afternoon; at other times those benches are crowded.) It's the simple, cheap, practical sort of thing that airports could use more of.

Speaking of Mexico, it's hard to believe that Mexicana airlines is no longer with us. Founded in 1921, Mexicana was the fourth-oldest carrier in the world (KLM, Avianca and Qantas are numbers 1-3), before it ceased operations in 2010.

And as maybe you heard, another storied national carrier recently bit the dust. Hungary's Malev shut its doors earlier this month after 66 years of operation.

Mexicana, Malev, Swissair, Sabena, Air Afrique ... It's been a rough 10 years or so for some of the industry's oldest hands.

As some of you have already heard, this column will be changing/morphing/moving in the coming weeks. Details aren't fully worked out yet, but so you're not left behind, please join my mailing list. You'll get updates on where to find the latest postings, news about the new edition of the book, etc. (no more than an email or two per week, I promise).