The famed author opens up to Salon about new threats, his just-finished memoir and his forthcoming TV show 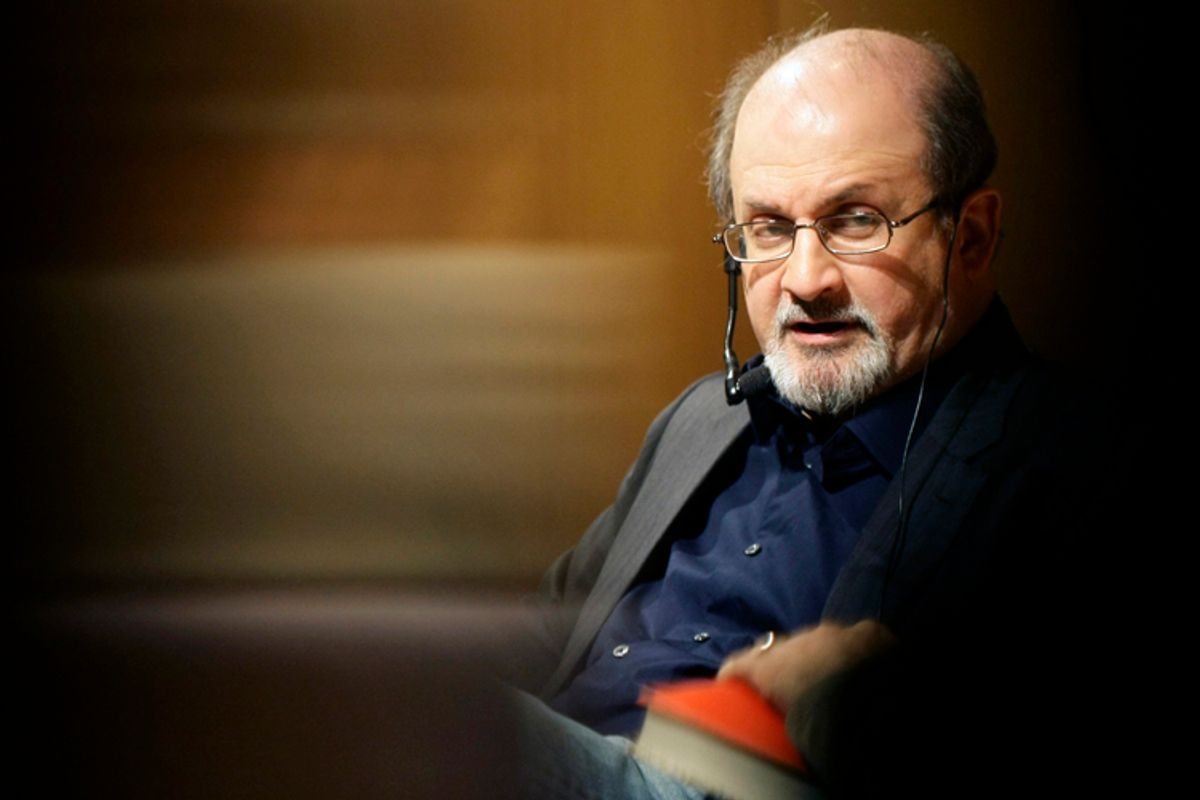 Plates and glasses are cleared away, and a hush descends on the packed private dining room of a fancy Manhattan Indian restaurant; a distinguished writer -- the star of the evening’s event -- is about to give a reading. The iPad in his hands bathes his familiar features in a soft, electric glow that complements the muted lights and blinking candles spaced around the room.

As Salman Rushdie intones his own elegant prose in a rich, musical British accent, a soundtrack plays softly but distinctly in the background. If the music seems particularly well-selected -- if its rhythms subtly match the story's turning points -- that’s because it was commissioned expressly for the purpose.

Though the story is short, Rushdie stops several times to ask the audience if he should continue. At each juncture, rapt listeners beg him to go on. After the performance is over, guests murmur words like “mesmerizing” and “transporting” as they turn back to their tablemates -- and I’m one of them.

The event is a glitzy dinner organized by Booktrack, a company that publishes e-books with "synchronized soundtracks"; the occasion is the launch of the e-publisher's first short story -- Rushdie’s “In the South" -- with accompanying music composed by John Psathas. ("In the South" is available for download now from Booktrack's website.)

How do we dignify storytelling’s grand traditions in the Internet age? How can we use new technologies to enhance texts, while staying true to the most essential elements of the reading experience? Come to think of it, does that experience even need enhancing to begin with?

These questions preoccupy the contemporary e-book industry, and all who follow it. But after the reading, as I pull myself back to real life, I don’t need to wonder what exactly has been so special about the night's performance. It wasn't the tailor-made music -- although that was beautiful -- but rather the chance to hear an author’s tale quite literally in his own words.

In fact, the whole evening is something of a treat. I’ve been following Booktrack ever since the Rushdie project was announced, hoping to speak to the author about these musically “illustrated” texts. When I enter the dining room to check the seating arrangement, I've been seated at a table of reporters -- next to the great man himself.

First, what does Rushdie -- who has embraced social media wholeheartedly over the past several months -- think of the Booktrack project?

“I had to be convinced that this was a good thing,” he says. "But actually, when I heard the music, I thought it really went very well.” Although Rushdie’s own instinct is to read without music, Booktrack’s presentation of his story eventually “won [him] over.”

“I always yield to [my younger son] in these decisions,” he notes graciously. “He said, ‘It's super cool, dad.’ If he thinks it's super cool, he's right. What do I know?”

How does it compare to other settings of his work to music -- such as the eccentric 12-tone opera version of “Haroun and the Sea of Stories,” which played in New York in 2005? (I’ve learned the hard way that twelve-tone opera is an acquired taste.) “[Booktrack] is different because it’s not dramatized,” Rushdie says. “In the case of Haroun, that was a whole opera. In this case, basically the reading is still something you do quietly by yourself.”

Rushdie explains that he was offered several chances to weigh in on the music as it was composed, but largely kept out of the creative process, since he found nothing objectionable in the draft material he was sent. "I just liked it. The composer was over in New Zealand, and he would email me clips of the music, and ask me what I thought -- so I guess if I thought that something was really wrong, I could have said so. But as it happens, I didn't think that. He was very generous; he was totally up for me saying whatever I wanted to say.”

Close followers of the Booker Prize-winning author -- or just readers of the New York Post -- will know that he’s been making lots of brave forays into the world of new media. He joined Twitter last year, and his 140-character contributions to the social network’s endless conversation span the full range of literary culture (and much else besides) -- from “Literary Smackdowns” to Kardashian-themed limericks. As much fun as he’s been having, though, he tells me that the move might not be permanent.

“I'm not even sure that I'm going to stay [on Twitter] forever. I thought I'd try it out, and it's been what, four months, five months now. ... I started doing it at a point where I was just coming to the end of a major piece of work, my memoir, and now I'm just beginning to think about the next major piece of work, which is this TV series I've got to write.” It might be harder to stay engaged with Twitter when he’s fully immersed in a project, he says. "But in between, I'm interested.”

What's his Twitter philosophy? “You have to have a kind of an idea of how you use it. One of the things I didn't want to do is to use it for personal trivia. I use it for stuff that's in my head, or books that you're reading, or some political thing that's going on that you want to comment on -- then I think it can be very effective. But you do have to have a sort of strategy of it.”

I point out that his strategy seems to be working -- he has more than 205,000 followers -- and that he’s known for being outgoing in the offline world, as well. Does he think of himself as a socialite?

“I don't know about 'socialite' -- I think I'm more sociable. I think a lot of writers are very private people. I've always found that, at the end of my day's work, it helps me to get out of my head, and be amongst people, and do something else. I go back to my work the next day feeling fresher because of it. That's a temperamental thing. I know lots of writers who, when they're working certainly, sequester themselves, because that's what works for them. Everybody finds out what works. At this point in my life, I'm pretty clear what works for me.”

Of course, Rushdie isn't totally at liberty to travel as he pleases. Just weeks ago, perceived security threats forced the author to skip the Jaipur Literary Festival (protestors later even blocked his planned appearance by video-link). To many, it was a sign that the fatwa issued against the writer in 1989 might still pose real dangers. I ask if Rushdie feels any trepidation about socializing publicly here in New York. “No,” he says firmly. “It has really been over a decade since there was any real security issue," he adds, downplaying even the threats from Jaipur. "I'm glad to be at this point, because it was serious for a long time. It was always less problematic in America, actually. Even in the bad old days, it was less of an issue here.”

The project he’s focusing on at the moment -- since he’s finished his memoir and the screenplay for “Midnight’s Children” (now “deeply in post-production”) -- is the pilot for a new Showtime series called “The Next People.” And though he’s achieved his greatest success as a novelist, he seems thrilled with the prospect of writing for a new medium.

“Once you've written feature films, [writing for TV] is not so different,” he explains. “You know, writing is writing -- finding a way to tell a story. I just think what's happening and succeeding in television drama in America right now is very exciting. ... Because you've got cable, you have enormous creative freedom. All sorts of things that on the networks would be restricted, like language, violence, sexuality -- none of that is an issue on cable. It means you can really write as freely as you want. And you have 12 hours, so you have an almost novelistic length of time to develop character, reveal narrative slowly, deceive people and then reveal things. It's very much a writer's medium, the drama series.”

When it comes to nominating favorite recent TV series, “Homeland” occurs to him immediately -- as do other “obvious ones” like “Mad Men,” “Breaking Bad,” and “The Wire.”

As Rushdie gets up to read his story aloud, and the evening draws to a close, I know one thing for sure -- I’m looking forward to reading his memoir (though it’ll clearly be too long to have a soundtrack itself; “it’s a brick,” he laughs). Perhaps I’m particularly excited because, in the midst of a discussion about Cambridge University -- where we both did our undergraduate degrees in History -- he offers a tantalizing teaser. “I taught [E. M.] Forster how to play croquet on the day that Evelyn Waugh died,” he exclaims, adding playfully: “Just showing my age."