Unions in a "death spiral"? Not on my job site

In the building trades, labor is flourishing 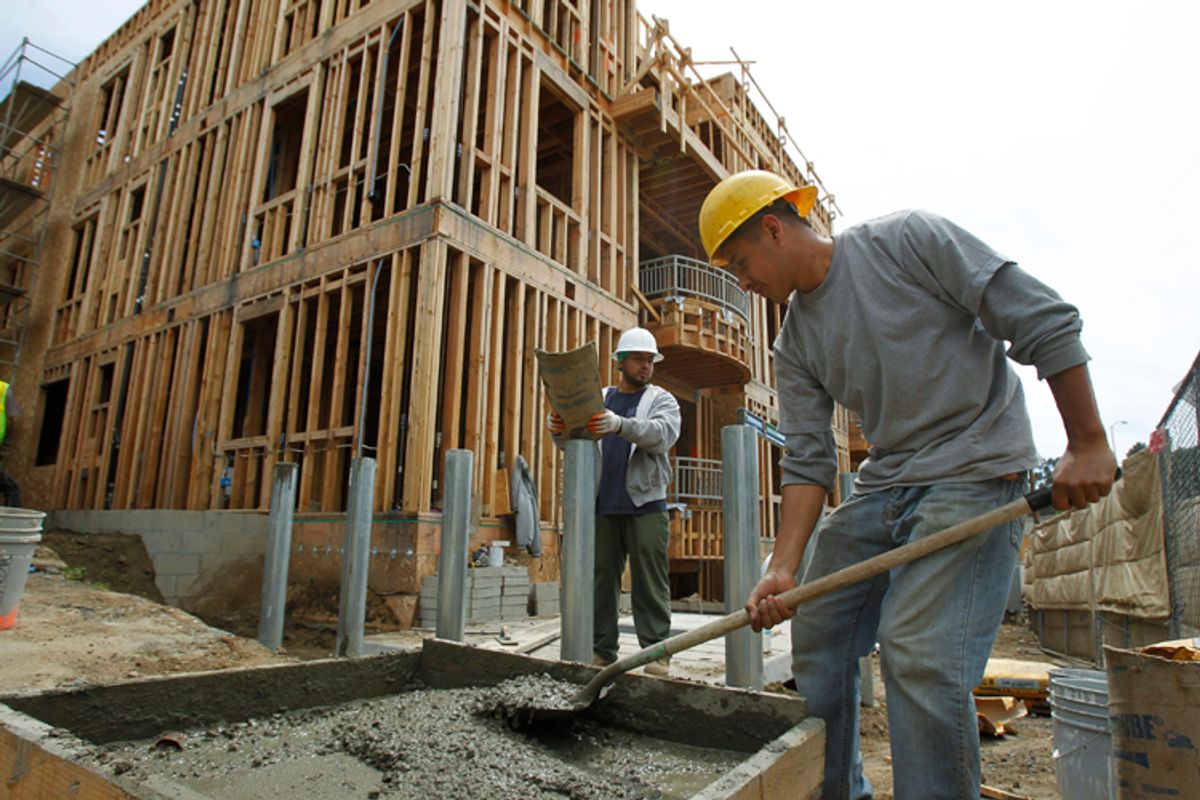 With his assertions in Salon that "unions are in a death spiral" and "private sector unionism has all but vanished," Arun Gupta advances a shortsighted and incomplete narrative promoted too often by the mainstream media. His blanket assertion that organized labor has no response to today's challenges, other than to throw hundreds of millions of dollars at the Democratic Party, demonstrates an unfamiliarity with the nuances of today's union movement. As a close observer of the labor movement, I am confident in stating that, at least in the construction sector, Gupta's portrait bears little resemblance to what is actually occurring.

These results were not achieved by accident or happenstance. Rather, the building trades unions have collectively embarked upon a comprehensive campaign to change the culture of the union construction industry, on the inside and out.  Through the establishment of stringent local union accountability standards, as well as rank and file codes of conduct and excellence, these unions are setting the bar for value-added on the job site and political achievement in state capitols.

Everyone in the union construction trades will tell you that high standards are a reflection of the fact that, in their world, the only guarantee is the first eight hours on the job.  If expectations are met or exceeded in the performance of their craft, then a union tradesperson has simply won the right to come back for the next eight hours.  This kind of self-accountability is encouraging to contractors, owners and newcomers to the trades alike.

Perhaps the most noteworthy aspect of the building trades' collective renewal, from an outsider's standpoint, has been the attempt to reverse the perceived legacy of being “stale and pale” organizations that were, at one time, reluctant to embrace diversity.  The new age of construction unionism has insisted on forging important and mutually beneficial community partnerships and pursuing higher safety and diversity standards than the competition.

In dozens of cities nationwide, the building trades have pursued new members in historically disadvantaged communities.  These members have not simply been given a pen and asked to sign, or been given a sign and asked to march, they have been offered unmatched apprenticeship opportunities that provide a clear path to the skills needed to realize the goal of a supporting a family and making a future.

Through the increased embrace of Project Labor Agreements by major corporations and public sector agencies, these unions are creating structured pathways to increase the number of minorities and women who gain access to the skilled trades.  The non-union construction industry has no such standards, no such goals, and no apparent interest in pursuing them.

The uptick in PLAs has brought increased interest in military veteran hiring practices.  Almost 10 years ago, the building trades unions of the AFL-CIO created a program, Helmets to Hardhats, expressly designed to provide job and career training opportunities to transitioning military veterans.  To date, the program has placed thousands of veterans in jobs and in union apprenticeship programs all across the nation.

This story line of rebuilding lives and reinvigorating communities was recently on display in Los Angeles where the L.A. Metro Board of Directors unanimously approved a multibillion-dollar PLA (my wrap-up on it here).  The agreement includes a formal plan to help increase the number of workers from disadvantaged areas that will be hired on the agency’s transit and road projects. This PLA, negotiated with the Los Angeles/Orange County Building Trades Council, is believed to be the first of its kind for a transit agency in the U.S.  Under the Metro L.A. PLA, 40 percent of work hours on future projects will be done by workers who live in economically disadvantaged neighborhoods and 10 percent of work hours will go to workers struggling with poverty.

Perhaps the most interesting aspect of  the L.A. Metro PLA, though, was the unanimous vote of the board.  This vote included five Republican members.  This represents the less publicized element of the building trades' campaign of cultural change.  These unions have achieved results by doing what the Occupy movement and the labor movement at large have often refused to do: by working with the GOP.

Despite this or, rather, because of this, one of the most under-reported stories of the past year was the broad and stable level of support offered by a number of Republican senators and representatives for building trades union policy goals.  On several occasions over the course of 2011, roughly 50 Republican House members voted to sustain Davis-Bacon Act prevailing wage protections on federally funded construction projects.  Similarly, two dozen GOP representatives repeatedly stood with the building trades on the issue of federal PLAs as promoted by President Obama’s Executive Order.

These outcomes were not the result of simply throwing money at politicians, although it is relevant to note that the building trades unions of the AFL-CIO are collectively, according to Federal Election Commission data, one of the top five contributors to the Republican Party over the course of the last 10 years.  More important than political donations, however, has been the building trades' consistent pattern of inclusiveness -- from the job site to the nation's capital -- that has enabled these private sector unions to do everything but vanish as Mr. Gupta suggested they have.

Steve Cooper is the founder and editor of the labor blog We Party Patriots, . He is also an occasional private chef and an avid musician whose songs have been featured on TV programs including 30 Rock, Chuck, and New Girl. He lives in Brooklyn, NY.