Catholic tribalism and the contraceptive flap 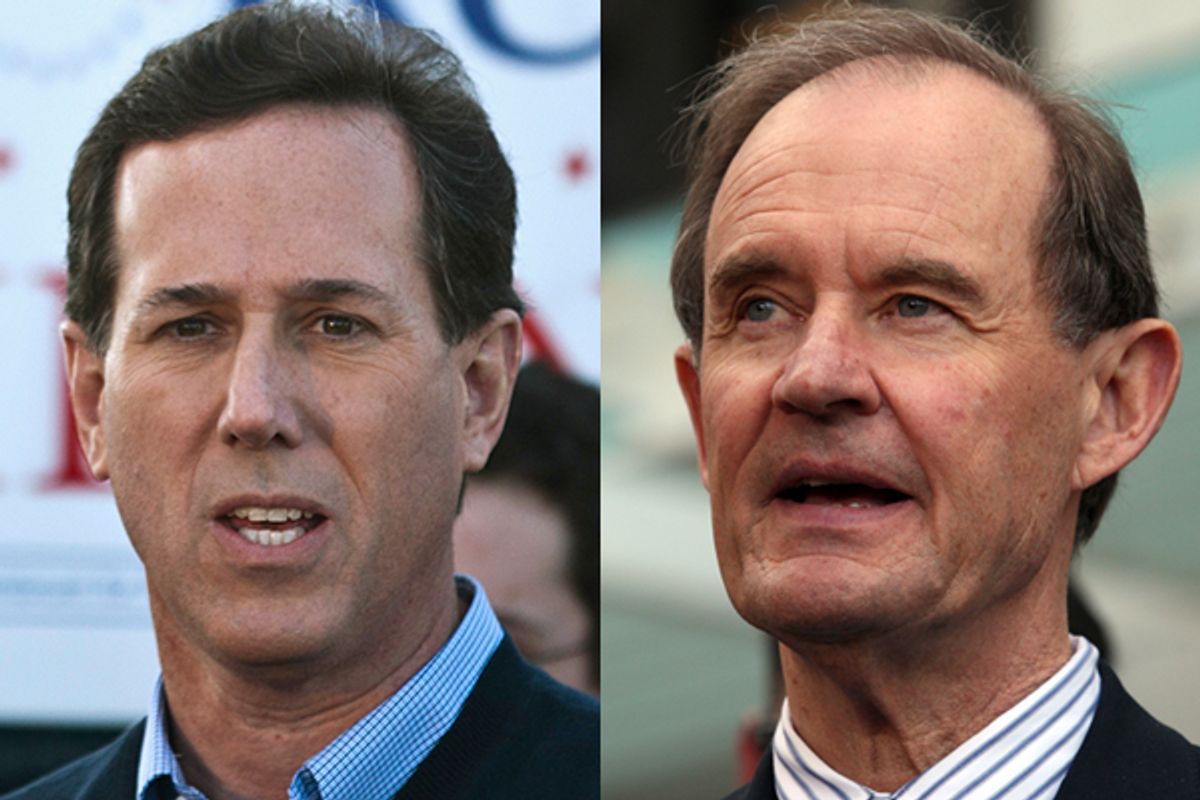 The resolution to the contraception contretemps seems mainly designed to do one thing: mollify the Catholics who defied the U.S. Conference of Bishops to support the Affordable Care Act in 2010. Church leaders are unlikely to officially back this so-called accommodation – the White House isn't calling it a compromise -- just as they continued to oppose the ACA even after President Obama did everything imaginable to insist the new law wouldn't provide federal funding for abortion.

But the new agreement makes it possible for women's groups and some liberal Catholic leaders to maintain a truce on hot-button social issues while working together around issues of women's health and universal access to healthcare. Planned Parenthood and NARAL Pro-Choice America are happy with the solution, and so is Sister Carol Keehan of the Catholic Health Association, who endured withering heat from the bishops and their right-wing allies over the ACA. Kristen Day of Feminists for Life likewise backs the deal. Even New York Archbishop Timothy Dolan called it "a step in the right direction," though he demanded more time to examine the fine print and suggested "legislation will still be required" to protect the church's right to discriminate against women.

The bishops and the entire 2012 GOP field will continue to fight their culture wars, but the White House apparently believes the non-compromise will win them the middle ground and make the 24-7 cable news show wailing and hand-wringing – even by some liberals – go away. We'll see.

But what just happened? Why did we spend 10 days listening to prominent Catholics, including even some liberals and Democrats, insist that the White House had overreached and trampled on "religious freedom" – in this case, the "freedom" of the Catholic hierarchy to impose rules that even most Catholics don't live by?  The great E.J. Dionne led the charge, but Catholic Democrats like Sens. John Kerry and Bob Case and Virginia's Tim Kaine joined in, and occasionally, liberal TV hosts like MSNBC's Lawrence O'Donnell and Chris Matthews seemed inclined to depict the controversy as being about the church's right not to violate its own values. Vice President Joe Biden was said to be the leading voice within the administration warning Obama away from the issue.

"This has struck a tribal nerve in Catholicism," conservative Catholic scholar George Weigel said to Chuck Todd on "The Daily Rundown" last Monday. "The Catholic Church has been beaten up over the last 10 or 11 years and I think Catholics are tired of the government and others beating up on the church." His liberal co-religionist on the panel, E.J. Dionne, agreed. I found that fascinating, especially because most of us consider tribalism a bad thing in a multi-ethnic democracy.

Still, while I didn't share that reaction, I recognized it. It amazes me sometimes, the extent to which Catholics still see themselves – ourselves -- as outsiders. There's a vestigial impulse to circle the wagons and protect our right to practice our persecuted religion (even if it's no longer persecuted, and many of us don't practice very much of it anymore). Where does it come from? I've spent a lot of time thinking about this lately, because the importance of Catholics to the old New Deal coalition, and their ongoing status as key swing-voters in key swing states, makes understanding them – us – important. This same old tribalism leaves many Catholics receptive to GOP blathering about out-of-touch "elites" who supposedly disrespect their religious freedom. It helped shift many white working-class Catholics to the Republican Party in the '60s and '70s.

There may be an element of remorse involved when liberal Catholics defend their faith, especially among those who defy the church (rightly, in my opinion) on its most blinkered teachings in the realm of women's rights, gay rights and sexuality. For some it may be guilt: OK, I might not listen to the bishops, but I think we ought to demand that they're respected in the public sphere. And for some it may be grief: We grew up with a rich tradition of social responsibility and spiritual meaning that's unfortunately been warped by leaders who worship worldly power and have odd views about sex as well as women. While the child abuse scandal makes most Catholics sick, sometimes even I wince when non-Catholics judge the whole church by the corruption of a comparative (though very powerful) few.  I have cousins and uncles and aunts who've joined religious orders (though, truthfully, most of them left). I don't like seeing all of them considered perverts or pedophiles, or people who cover up for predators.

How Catholics work out their complex feelings about the church matters beyond the tribe, if only because they're crucial to the 2012 election. One in four voters is Catholic, and Obama won a majority in 2008, while Republicans won them back in 2010. Obama lost white Catholics, however, although he won among those who say they aren't regular churchgoers.  I think Catholics remain an important, not always predictable constituency at least partly because of their own unresolved, unpredictable feelings about their religion, and their status as Americans.

I found myself thinking a lot about my own complicated feelings about my heritage as I watched Catholics grapple, not always rationally, with the contraceptive controversy. Even when I didn't agree, I empathized.

I grew up in a huge Irish Catholic clan on Long Island, but as an adult, I put away childish things (in the words of St. Paul, though not as he intended them) and became a secular feminist liberal Democrat. The first time I remember feeling anything like tribalism was after Sept. 11.

Many liberals around me criticized the overt religiosity of the public mourning for those killed that day, all that talk about God, which struck me as reflexively and needlessly anti-religion at a time when many Americans -- dare I say most -- found comfort in their faith. Then, after a benefit for survivors' families turned a little rowdy, with one cop taking to the stage to say "Osama bin Laden can kiss my royal Irish ass," the heavily Irish and Catholic cops and firefighters in attendance were roundly derided as right-wing tribalist rubes. That bothered me, too: Who did we think died trying to rescue those trapped in the World Trade Center, Susan Sarandon and Michael Moore? Members of my own family had worked in the rescue operation after the towers fell. I wasn't down with the mockery.

A lot of my belated tribalism was a class thing: I'm not workin-class, but my parents and aunts and uncles were, and some of my cousins are still part of that ill-defined and disappearing demographic. There's clearly an element of snobbery in the way the white working class is routinely run down as backward, racist, narrow-minded yahoos, and I've grown to resent it.

Yet in general, Catholics are doing pretty well for themselves. We're well represented in certain segments of the American elite, especially elite punditry, it seems.  It's understandably hard for some people to imagine, in a world so striated by race and class, how Catholics could feel like oppressed outsiders. Yet it's also true that while we've only elected one black president, we've only elected one Catholic president as well. I'm not trying to equate the struggles of black people and Catholics. In fact, it's especially when you understand how relatively privileged Catholics have been, compared to African-Americans, that having only one Catholic president stands out, and makes you wonder: Why?

It's hard not to conclude that some residue of the religious nativism that persecuted and stigmatized Catholics in the 19thcentury, defeated Al Smith in 1928, and forced John F. Kennedy to promise he wouldn't take orders from the pope in 1960 persists to this day. So even if we haven't personally experienced anti-Catholic prejudice, and I can't say I have, there's an atavistic memory, something bred in the bone, that forces many of us to defend our once-persecuted church, even when we profoundly disagree with it.

But it wasn't until I debated the Family Research Council's Tony Perkins on "Hardball" this week that the craziness of the right-wing Catholic alliance with conservative evangelicals became particularly obvious to me. They've locked arms with some of the very forces that once persecuted their ancestors – some of whom still despise Catholicism to this day. On "Hardball," Perkins posed as a defender of the Catholic bishops' position on Obama's contraception rules. But he's also been an ally to virulent anti-Catholics like Rev. John Hagee, who called the church "the great whore" and a "false cult." And Rev. Robert Jeffress, who likened the church to Satan and labeled Catholicism a "fake religion." Like Zionist Jews who've made common cause with right-wing evangelicals over Israel, some Catholics are lining up, in the name of religious freedom, alongside folks who want to wipe out their religion. I've heard some liberals express disdain for some of the church's teachings, but I've never heard anyone compare it to Satan or call it a whore.

Zealous right-wing Catholics are in the minority, even if blowhards like Bill Donohue sometimes make the most noise. In the end, I think the contraceptive flap forced a lot of Catholics to reckon with the gulf between what they practice and what their church preaches.  The truth was always there, if we wanted to find it, not merely in polling data that said 98 percent of sexually active Catholics have used birth control, but that solid majorities of Catholic voters supported Obama's contraception regulations applying to large Catholic institutions, like hospitals, charities and universities, that employ non-Catholics. I loved the fact that students at Catholic universities held a press conference Thursday to support the president, and that organizations like Catholic Democrats and Catholics for Choice were active and vocal in standing up to their own bishops.

There are a lot of outstanding questions about the implementation of the administration's non-compromise. But I have to disagree with Esquire's Charles Pierce – I'm not sure that's ever happened before – and say I don't consider this any kind of cave on the president's part or victory for the bishops. I prefer the interpretation of Frances Kissling, founder of Catholics for Choice, who wrote on Friday that the "accommodation" made the bishops the "losers" and women the winners. ”When the White House cares more about what a simple Catholic sister, [Sister Carol Keehan], thinks than about what the bishops think, Catholic women can applaud. Perhaps the crack in the patriarchy is becoming a deep canyon."

I can't go that far – especially after seeing this Think Progress report that documented what we all knew: that men dominated the debate over the controversy on cable news. It's also a little sobering that so many of the liberal Catholic voices questioning the president were male, while most of the liberal voices backing him were female. But between this and the victory for Planned Parenthood in the Komen mess a week ago, I see evidence that we're reaching a new place in the battle over gender. At the very least, being a woman is no longer a preexisting condition, as the Catholic Nancy Pelosi likes to say.