While relenting on gay soldiers, the Pentagon still excludes women from combat 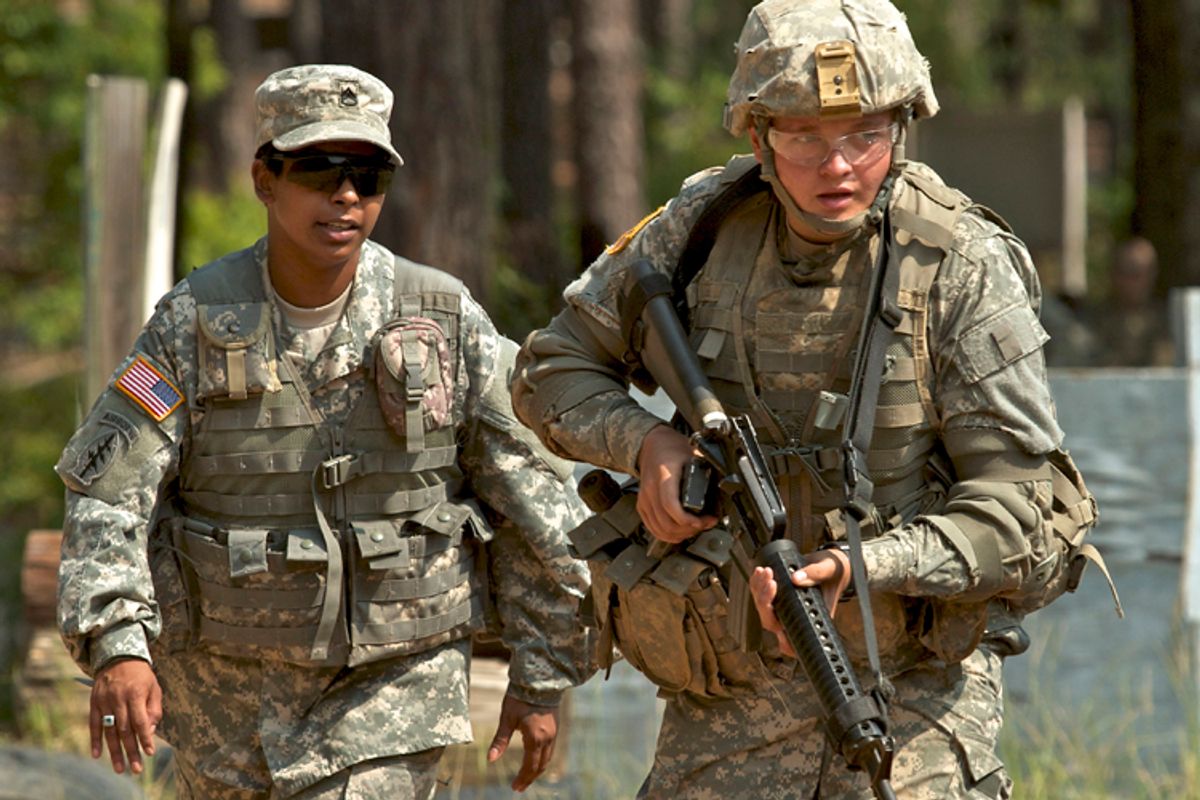 Having dragged its feet for almost two full decades on letting openly gay citizens serve in the military, the Defense Department is now “evolving” on women in combat. Those sex roles move at a geological pace, don’t they?

On Thursday, the Pentagon released a report allowing a trickle more of estrogen into the front lines, with women now officially assigned, instead of informally attached, to battalions. But despite an explicit recommendation from a panel of neutral experts, still no ground fighting, no combat infantry, no special forces. In a press release, the women veterans’ Service Women’s Action Network “regretted” the failure to lift the “unfair” Combat Exclusion Policy, which precludes women from becoming infantry members.

Will they never learn? A year ago, the lame duck Congress finally voted an end to the despised exclusion of openly gay men and women from the service, “don’t ask, don’t tell.” The same arguments – unit cohesion, unfitness for combat – that were used against open gay service now live on as the last barriers to women. For however many women are fit enough and inclined to take those hard-line jobs, as for the many dedicated gay and lesbian service members, the exclusions are an insurmountable barrier to their aspirations and a costly waste of human power for the country.

The exclusions are, equally, a pitiful excuse for the real agenda – that warfare is the business of heterosexual men, the penetrators. As Bush White House advisor and political scientist John Diulio put it in an infamous article in the New Republic, “by military cultural definition a soldier can’t be gay.” If any evidence of this agenda were needed, the same person who created and defended the dreaded "don’t ask, don’t tell" -- military sociologist Charles Moskos -- was the loudest advocate of excluding women from any combat roles.

Woman's  “compassionate nature” Moskos speculated in a 1990 Washington Post op ed, would be a real hindrance. The debates about today’s report bear an eerie resemblance to the naturalistic explanations for the heterosexual definition of soldier from "don’t ask, don’t tell" days.

Well, what about that compassionate nature? Is it a step forward when females, supposedly the less bellicose gender, fight to be able to ... fight in combat? In feminism’s bell-bottomed days, this would have been a serious debate. Proponents of drafting women in the Vietnam War days were mostly shouted down as running dogs of the military industrial complex.

And it is true that enlisting people into mortal combat in the service of the state is a weird misfit in the liberal state, which justifies itself on the basis that it won’t make peoples’ lives worse than they would be if they lived without any state at all. But like the gay movement and marriage, feminism has mostly moved beyond the contention that women are morally superior or that war is always and incontestably wrong. If the society is sufficiently threatened, sometimes even liberal states must invoke the willingness to sacrifice, even life itself, for the good of the enterprise. At crucial times in Western history – classical Athens, revolutionary France – full military service was indistinguishable from citizenship itself. Why should women who can serve be excluded from this service to the state?

The women in service – and especially the ambitious women who hope to make a mark and a career for themselves in the service – know that exclusion from combat throws a definite pall on the already Byzantine process of military promotion. They call it the “brass ceiling.” When the question of women in combat first came up in the '90s, surveys revealed that it was the female officers who were really exercised about their exclusion.

Uppity women with guns have to be a pretty scary prospect for the believers in that naturalness of male war-making. But if the gay revolution is any indication, the exclusion of women who want to volunteer their lives for the nation is too inconsistent with the rest of American values to last much longer.