The case for a global currency

Would it make more sense to have one currency for the entire world? 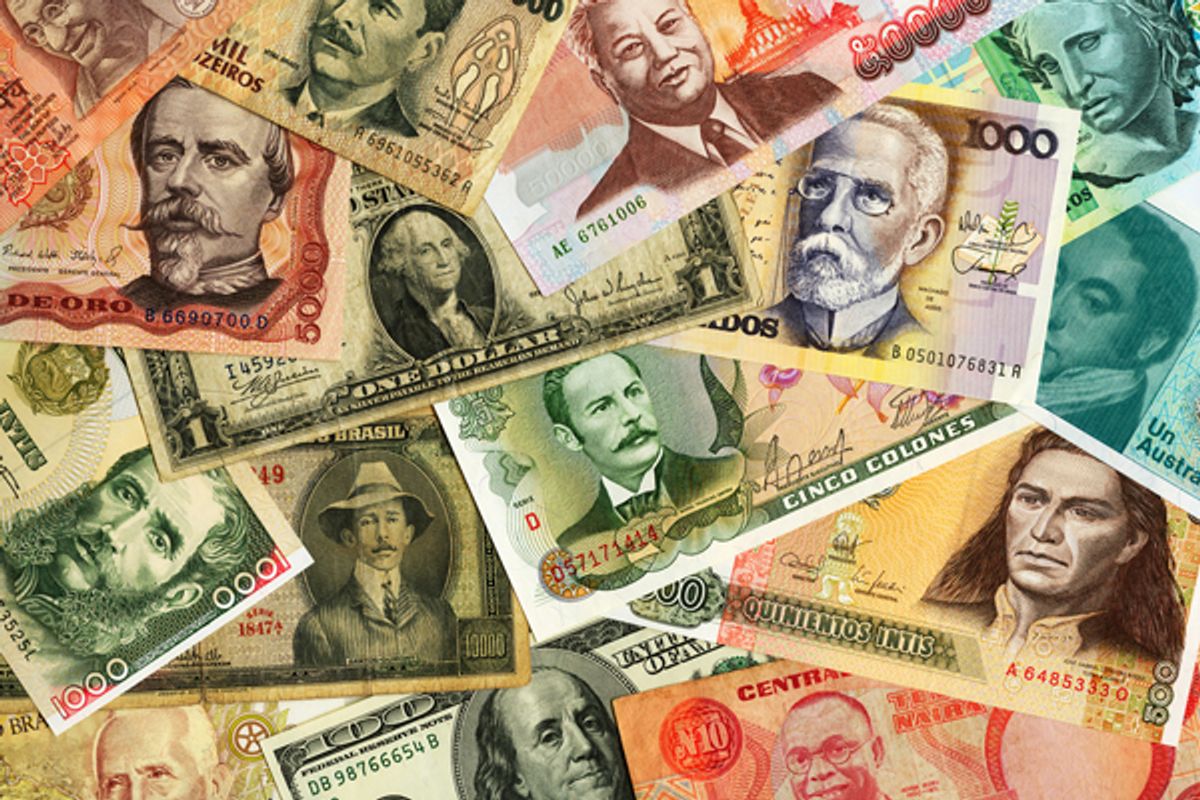 This article was adapted from the upcoming book, "The End of Money," in bookstores Feb. 14 from Da Capo Press.

In the age of globalization, what does it mean, really, to be from one country and not another? We have some easy answers, along the lines of language, shared history, cultural references, and geography. I grew up cheering for the Red Sox, not the Hiroshima Carp, so that adds to my American-ness. I had to learn about the Federalist Papers in high school. I pay taxes and vote here. All of these things, some minor, some major, contribute to my sense of being part of this country.

Greenbacks do too, whether I like it or not. The coins and banknotes of a place are one of the few remaining touch-points of national identity left in our increasingly digital world. The monuments, symbols, and famous people splashed on them help reinforce this sense of nationhood. But as representations of the currency, they do more than that, because the currency is both the fabric of the economy and the stitching of the state. Even Marco Polo saw this in China, as the currency pulled a vast kingdom together under one umbrella of economic organization.

In recent times, though, having a national currency, at least for smaller countries, is looking more and more anachronistic. At the minimum it should be up for debate. Benn Steil, an economist at the Council on Foreign Relations, told me that when he lived in Europe in the 1990s, the old saying was that to be a country you needed an airline, a stock exchange, and a currency. By the twenty-ﬁrst century, that was hardly the case: airlines had merged or gone bankrupt, stock exchanges had consolidated, and the euro had become the dominant currency of the continent. In the years ahead, more and more small countries may decide to quit their currencies and adopt that of a more powerful neighbor (the Australian dollar in parts of Oceania, for instance), band together with nearby countries to form a currency block (e.g., the East African Monetary Union), or jump aboard an international powerhouse like the U.S. dollar or the euro.

All kinds of factors could sway this decision: runaway inflation, fear of currency crises, too little infrastructure to manage the cash supply, an unexpected rash of counterfeits, hope of greater competitiveness in global trade, and the wish to put an end to potentially dangerous speculation about the currency’s worth next week or next year. Steil points to relatively strong economic growth and stability in countries like Ecuador, El Salvador, and Panama, which have all officially adopted the U.S. dollar. Even where the local currency still reigns as far as officialdom is concerned, “spontaneous dollarization” is widespread. More than half of the bank deposits in Latin America are denominated in U.S. dollars.

Steil’s thesis hinges on the fact that most monies in the world are unattractive to people who live outside the countries where those currencies circulate. Notaphilists may keep Icelandic króna in their collections, and my dad still has the Samoan, Cuban, and Egyptian banknotes I once gave him, but investors won’t hold these currencies as a store of wealth, says Steil — “something that will buy in the future what it did in the past.” The same goes for the Argentine peso, and doubly so for currencies of absolute-shambles countries. Know any friends who are denominating their kids’ college savings accounts in Somali shillings? Exactly. At the same time, while all countries conduct trade to grow their economies, smaller ones eat extra costs for perpetually converting from the local currency into something else. There’s also the fact that countries generally need U.S. dollars to repay their creditors.

Dumping the national currency would also protect people from harmful manipulation of the currency’s value by corrupt or incompetent public officials. Which begs the question: would a handful of regional currencies, or even a single global currency, help to prevent such disruptions, and by extension improve prosperity?

As for citizens in the United States and Europe, when other countries adopt the dollar or the euro, we proﬁt from seigniorage—or the government does, anyway. By putting more money into circulation— inside or outside our borders—the Fed pockets the interest generated from this process, so it’s really no skin off our backs, provided those countries understand that the United States will never make monetary or economic policy decisions because of conditions in some other country that happens to use our currency.

This idea of pulling the plug on small-country currencies made all kinds of sense to me, right up until the insanity in Greece. Greece’s crushing debt was partly the fault of government officials who cooked the country’s books so that the nation could meet the standards of economic stability necessary to join the euro a decade ago. At the moment, the euro looks like a suit that is ﬁve sizes too small, and Steil’s Foreign Affairs piece calling for currency unions seems distinctly out of sync with the times. Maybe the króna and other tiny-country currencies have a future after all. But other leading currency experts assert that this is a short view of the euro situation, and that after this period of turmoil it’ll bounce back stronger than ever.

As Steil and his sympathizers see it, countries with their own currencies invariably walk in monetary step with their major trading partners: Mexico’s currency generally tracks to the U.S. dollar, Sweden’s krona closely follows the value of the euro, and so forth, and this is the case no matter how autonomous those countries’ central banks may think they are, and no matter how patriotic the artwork adorning their banknotes may be. As Olafur Isleifsson, a professor of business at Reykjavik University, told me: “We didn’t have monetary independence before. The central bank moves were all forced moves, like in chess. Monetary independence is a phantom.” I kept hearing this basic idea whenever I spoke with people about ending small sovereign currencies in favor of regional ones, but the debt ﬁascos in Europe show that this is anything but a deﬁnitive forecast of what lies ahead.

For economists, this dispute cuts to the core of the most macro question there is: what monetary system offers the best route to a more prosperous future for the most people? Starkly different answers to that question reveal how divided scholars are about what it takes to keep economies healthy, and even about the utility of sovereign currencies. As if the stability of the whole show wasn’t tenuous enough already.

Nevertheless, the fact remains that more countries, especially biggies like Turkey, want to adopt the euro. (Poland and the Czech Republic, also in line, slowed down their efforts to join in light of the debt crises, but analysts say these countries will eventually join as well.) Leaders in these countries and elsewhere are convinced that the advantages of getting hitched outweigh those of going it alone.

A third way to buttress the value of a national currency is to tether its value to that of another one that is more stable. This strategy has worked for a number of countries, and some experts argue that the availability of this tool can make the idea of regional currencies look like a moot point. Why terminate the central bank’s ability to manipulate the money supply in an emergency if you don’t actually have to? Steil says this approach is still precarious and can end up robbing people of their money: “Which would you prefer. One: I give you $100. Two: I give you a hundred pesos, with a promise to redeem them for $100 if you ask? Option two is a currency board or ‘hard peg,’ which is what Argentina did until 2002.” That was when the Argentine government reneged on its promise to redeem pesos for greenbacks. So much for your 100 bucks.

Steil is hardly the ﬁrst person to have thought about regional currencies, or to challenge the government imperative to issue money, but he’s one of the most vocal. The concept of optimal currency areas was coined by economist Robert Mundell in the early 1960s, and since then there have been a handful of campaigns to bring the idea into practice — a few of which are slowly moving forward, in Africa and the Middle East most notably.

On the one-world money front, there are scattered dreamers out there, outfits like the Single Global Currency Association, and supporters of something called the Terra TRC (for Trade Reference Currency). In the 1940s, the legendary John Maynard Keynes conceived of a supranational currency that he called the Bancor. The idea can be likened to the constructed language of Esperanto—one common tongue for all humankind. Why not one money for one world? Supporters of Esperanto believe it could someday reduce miscommunication and, by extension, promote world peace. Backers of a single Earth currency envision a great smoothing of transactions, an end to damaging currency speculation, and less economic turmoil, which could mean greater prosperity for all.

While Esperanto struggles for credibility, some economists seriously consider how a one-world currency might happen, albeit in a highly theoretical future. One idea is for this new currency to be an expanded version of something that already exists: Special Drawing Rights. SDR is really a crossbreed of four of the world’s most signiﬁcant currencies, and it’s used for particular kinds of settlements at the IMF. Perhaps the SDR is the embryo of a new global currency. Not that this would be a geopolitical walk in the park. “No global government . . . means no global central bank, which means no global currency. Full stop,” says UC Berkeley economist Barry Eichengreen. And a world government, lest we forget, is an apocalyptic prospect to a hell of a lot of people.

At the same time, however, many Americans’ image of the future incorporates this idea of a global currency—one Tolkienesque coin to rule them all. According to a Pew Research Center survey, 31 percent of Americans think an asteroid will smack into Earth by 2050, but 41 percent of them said they expect to see a shift to a global currency. We have it in our minds that dramatic change is on the horizon, even if the variable currencies and colorful cash we currently trade in and travel with seems like a permanent aspect of modern life.

From the new book "The End of Money: Counterfeiters, Preachers, Techies, Dreamers — and the Coming Cashless Society" by David Wolman. Reprinted courtesy of Da Capo Press.

David Wolman is a frequent contributor to Wired and the author of the forthcoming book, "Righting the Mother Tongue: From Olde English to Email, the Tangled Story of English Spelling" (HarperCollins).