A voice that touched us all

Like Michael Jackson, another icon lost to addiction and fame, Whitney was an awe-inspiring, genre-crossing pioneer 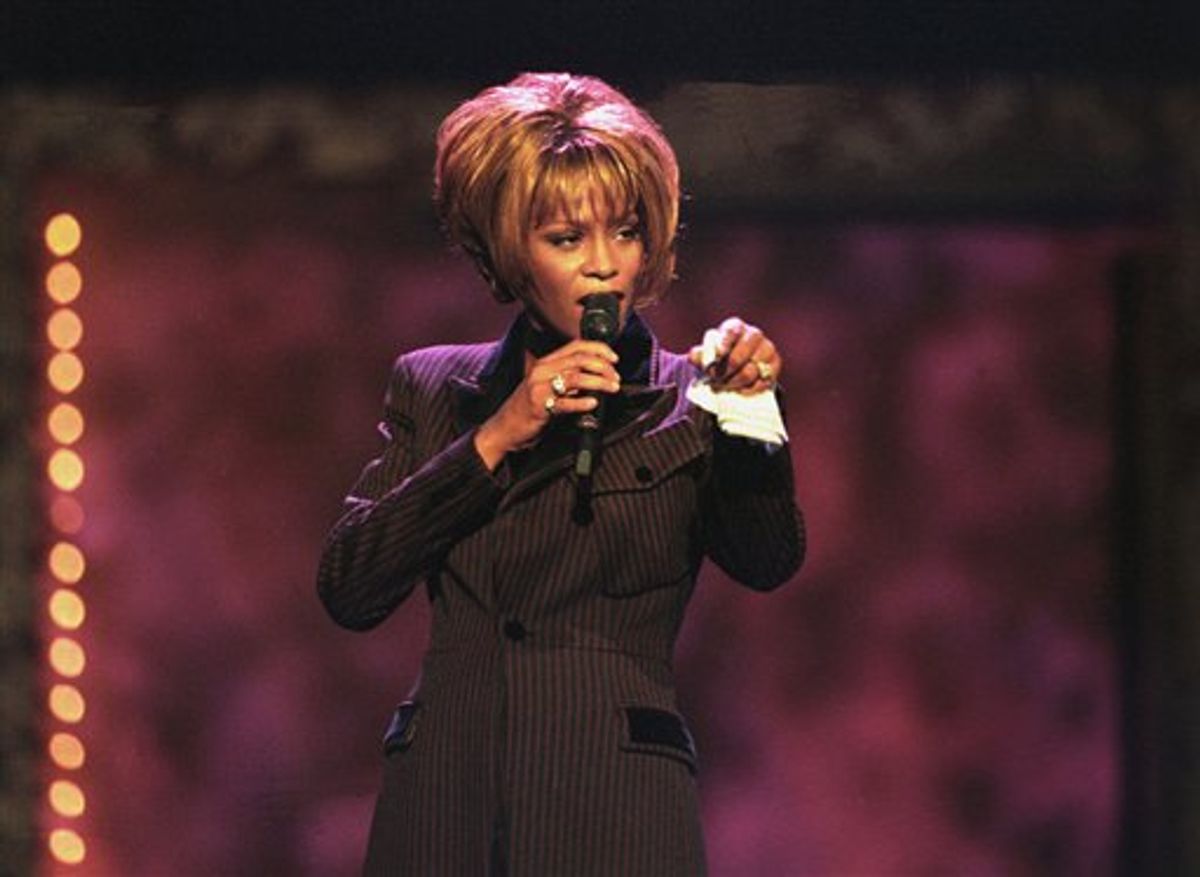 Whitney Houston performs during the Billboard Awards at the MGM Grand in Las Vegas on Dec. 7, 1998. (AP)
--

On Thursday night, Whitney Houston appeared at the Kelly Price & Friends Unplugged: For The Love of R&B pre-Grammys event. Amateur YouTube footage of the singer’s performance hinted at hysteria: Audience members screamed her name and flashbulbs exploded as she crooned the Christian hymn “Jesus Loves Me” in a sultry lower register as a duet with Price. The version of the song was gentle and tempered, although Houston’s beatific looks and animated gestures imbued it with quiet jubilance.

The performance feels sickeningly eerie on the heels of Houston's death Saturday at 48. Both the song and her duet partner were links to the singer’s decorated past: Price featured on her Grammy-nominated 1999 single “Heartbreak Hotel” and a studio version of “Jesus Loves Me” appeared on the soundtrack of "The Bodyguard," the 1992 album which made Houston a megastar. What’s more, she looked healthy and sounded strong; there were no warning signs that the brief appearance would be her last. (Though the photos of her returning to the Beverly Hills Hotel on Friday night tell a different story.) Houston, whose reputation was marred by a turbulent marriage to R&B star Bobby Brown (and a disastrous reality show about their lives together) and well-publicized struggles with addiction, finally seemed well enough to reboot her singing career.

Despite erratic public behavior and increasingly unsteady live performances, Houston always had fans who rooted for her recovery, who wanted her to recapture her powerhouse voice and magnetic personality. Born into music royalty — her mom was the gospel icon Cissy Houston, her cousin Dionne Warwick and her godmother soul great Aretha Franklin — the New Jersey native cut her teeth singing gospel in church, modeling and acting. By the time she earned a record deal, Whitney (like Madonna, Prince and Michael, one name was enough to identify her) was an enviable combination of glamorous and casual. On 1985’s "Whitney Houston" and 1987’s "Whitney," her spin on contemporaneous soft rock, R&B, soul and gospel was mature but not stuffy or beholden to formality; on early hit singles, she struck a balance between playful longing (“How Will I Know,” “I Wanna Dance With Somebody,” “So Emotional”) and serious balladry (“Didn’t We Almost Have It All,” “Saving All My Love For You”). To little girls growing up in the ‘80s, Whitney Houston and Madonna were the artists you emulated and sang along to (loudly); they were the powerful, confident women you heard on the radio all the time, the pair you strove to be like.

However, Houston was also more than likely the artist your mom (if not grandmother) liked, which helped her ease gracefully into an adult career. That period arguably started with her dual starring acting role/soundtrack appearances on 1992’s "The Bodyguard," a movie in which Kevin Costner played her protector. If her ‘80s tunes made her a household name, her interpretation of the Dolly Parton-penned “I Will Always Love You” sent her into the stratosphere. To this day, Houston’s soft-rock re-do of the country hit endures as an awe-inspiring performance: octave-dancing vocal prowess, nuanced emotional longing and the kind of subtlety hard to find in today’s mainstream music, in the form of her dramatic pause near the end of the song before she launches into the climactic, “And I…will always love youuuuu… .”

Houston would never top "The Bodyguard" and its monstrous success. (Besides “I Will Always Love You,” the soundtrack spawned the torchy hit “I Have Nothing” and a disco-soul remake of Chaka Khan’s “I’m Every Woman.”) And although she continued to evolve into a graceful R&B singer and rack up winning singles — throughout the 1990s, hits came from the soundtracks of "Waiting To Exhale," "The Preacher’s Wife" and "The Prince Of Egypt" and her 1998 solo album, "My Love Is Your Love" — her problems with drugs and a chaotic marriage soon took a toll on her public persona. Rumors of substance abuse swirled around her — something not helped when marijuana was found in her and Brown’s luggage in 2000 — and in a 2002 interview with Diane Sawyer, a defensive Houston uttered these infamous sentences: “Crack is cheap; I make too much money to ever smoke crack. Let’s get that straight, okay? We don’t do crack, we don’t do that. Crack is wack.” The latter catchphrase caused an uproar and did irreparable damage to her reputation.

But Houston persevered — and eventually came clean about her private turmoil. In a 2009 Oprah Winfrey interview, a calmer Houston — her voice noticeably raspier and lower — was open about abusing cocaine and marijuana, and admitted the post-"Bodyguard" era was tough: “By 'The Preacher's Wife,' [doing drugs] was an everyday thing. ... I would do my work, but after I did my work, for a whole year or two, it was everyday.” Her marriage to Brown was troubled, she told Oprah, including a time when he spit in her face in front of their daughter, Bobbi. The couple divorced in 2007.

In recent years, Houston’s fortunes ebbed and flowed. 2009’s "I Look to You" debuted at No. 1 on the Billboard charts, and the song "Million Dollar Bill" also hit No. 1 on the Billboard Hot Dance Club Play charts, but lukewarm-to-critical reception marred her 2010 world tour and she entered outpatient rehab as recently as May 2011. Still, in her recent public appearances she seemed upbeat and healthy; it seemed plausible she could follow in the footsteps of Tina Turner, who rejuvenated her career after extricating herself from an abusive domestic situation.

But with her premature death, it’s hard not to compare Houston to Michael Jackson, another ‘80s megastar who died young, crippled by addiction and the burdens of fame. Like the King Of Pop, Houston was a pioneer, one who broke open racial barriers so that other soul/R&B artists could have a shot at mainstream success. "The Bodyguard" was Houston’s "Thriller," the career albatross from which she could never escape. And just as MJ reinvented the concept of the male pop star, Houston did the same for women. She was vulnerable and girlish, but never let those qualities undermine her talent, something fellow huge-voiced diva Mariah Carey took to heart. And Houston exuded confidence in every aspect of her career — of course because of her voice, but also because of her expressive interpretations. She could have bludgeoned listeners over the head with just the sheer power of her voice — but instead, Houston approached her songs like an actress inhabiting a character, squeezing emotion from every lyric with sincerity, grace and elegance.