To achieve a truly fair society, we need to look to Lincoln, not Jefferson 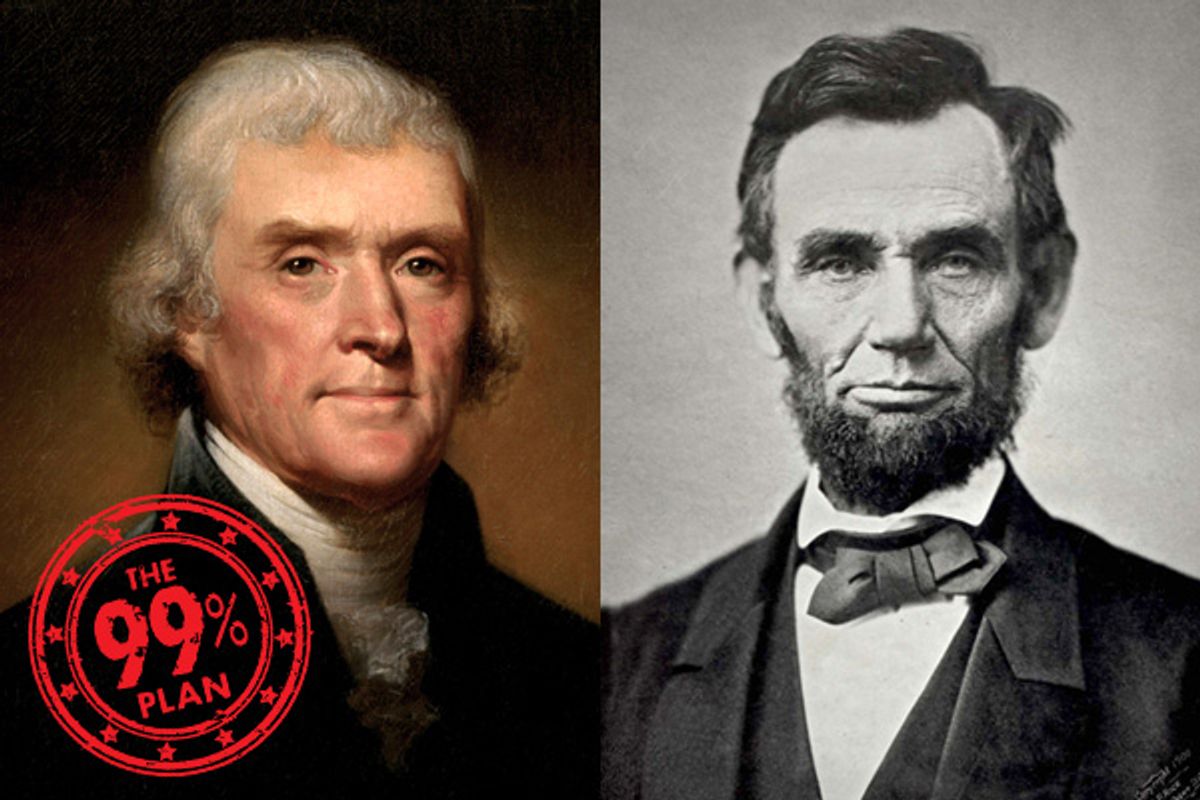 The 99 Percent Plan is a joint Roosevelt Institute-Salon series that explores how progressives can shape a new vision for the economy. This is the second essay in the series.

Americans are increasingly aware that the ideal of equal opportunity is a false promise, but neither party really seems to get it.

Republicans barely admit the problem exists, or if they do, they think tax cuts are the answer. All facts point in the opposite direction. Despite various tax cuts over the past 30 years, not only have income and wealth inequality dramatically increased, but the ability of individuals to rise out of their own class has declined. Social stagnation is increasingly the norm, with poverty rates the highest in 15 years, real wage gains worse even than during the decade of the Great Depression, average earnings barely above what they were 50 years ago, and more than 80 percent of the income growth of the past 25 years going to the top 1 percent. In fact, since 1983, the bottom 40 percent of households have seen real declines in their income and the same goes for the bottom 60 percent when it comes to wealth. We know what the economic status quo does: It redistributes upwards.

Despite the ambiguity of their goals, the Occupy protests have made one point abundantly clear: The mainstream Democratic alternative is paltry stuff. For the most part, Democrats disagree that tax cuts and deregulation are the solution, and instead argue that the state should be used to guarantee equal opportunity. For instance, cheap, publicly available education, job training and affirmative action are all justified on the grounds that each American should have the skills to compete and the labor market should treat everyone equally.

Yet, the two parties differ only on means, not ends. While Republicans profess a more abiding faith in a self-regulating economy, Democrats believe carefully tailored state interventions are needed to ensure equal opportunity.

The question becomes: Equal opportunity for what? For both parties, opportunity basically means a market-oriented ideal where individuals are given the chance to fight over a limited supply of high-status jobs. As it turns out, the end that each party agrees on is largely same: the equal opportunity to become unequal.

Most Democrats and Republicans share a commitment to an inegalitarian, early 21st-century version of social mobility first articulated in the United States by Thomas Jefferson. In a famous letter to John Adams, Jefferson argued that there is a “natural aristocracy amongst men” who are marked by “virtue and talents.”

According to Jefferson, the natural aristocracy was “the most precious gift of nature for the instruction, the trusts, and government of society." He distinguished this natural aristocracy from the “artificial aristocracy founded on wealth and birth, without either virtue or talents.” The latter won its power through circumstances and laws that protected the privileges of birth – like laws of primogeniture, or hereditary political positions. Jefferson’s view was seemingly egalitarian: Inherited status, wealth or power is undeserved. But at its heart, this view – let’s call it meritocracy – remained deeply inegalitarian. It favored a society in which the majority were deferential to, even subject to, the power and authority of the naturally talented few.

Republicans and Democrats each pay tribute to this Jeffersonian vision of meritocratic decision-making and political leadership. If anything, Democrats are often even more intent that Republicans in promoting expert authority and professional management.

The apparent egalitarianism of the meritocratic society is a thin veil indeed. The reality of rising poverty and declining social mobility underscores that in practice our "meritocratic" order is hardly fluid. Rather than individuals easily entering and exiting the upper classes based on personal skill, professional status has become an inherited privilege – reproduced from one generation to the next.

But even at its purest, stripped of race or sex-based barriers to advancement and in a setting of fluid inter-generational change, the meritocratic ideal is still aristocracy by a different name. After all, meritocratic success is a zero-sum game. Professional respectability and high-status positions are inherently exclusive domains. For every one person who rises into the top 20 percent, there are four others who by definition fail to make it. In fact, according to the Bureau of Labor Statistics, of the 20 occupations projected to grow rapidly over next decade, just five require an associate's degree or more. Just two require a doctorate or professional degree (hat tip Doug Henwood). As a model for society, Jefferson’s "natural aristocracy" does not challenge the permanence of social hierarchy, but instead seeks simply to rearrange its membership.

Still, there is another possible interpretation of equal opportunity that  we can look to. Just before the Civil War, Abraham Lincoln articulated an alternative account of economic improvement: “The prudent, penniless beginner in the world, labors for wages awhile, saves surplus with which to buy tools or land, for himself; then labors on his own account another while… [This] is free labor.”

Lincoln imagined social mobility as the transition from dependence to independence, or in his terms, from wage-labor to free labor. An economy consistent with this idea had to be organized so that everyone could become economically independent. One person’s success was not another’s failure, because ideally everyone could rise together.  Moreover, this was an ideal of freedom applied not just to politics but to economics. The thought was that a person ought to be free from domination in all spheres of life. As Corey Robin recently put it, Americans have a “visceral hostility to – individual forms of domination.”

This Lincolnian vision is truly egalitarian and highlights precisely what is troubling about the current crisis of social mobility. The problem is not just that we do not to live up to the ideal, but that the underlying ideal is hierarchical, and fails to grasp the way in which we ought to be making it possible for everyone to escape relations of dependence and control.

Today we barely know how to make sense of Lincoln’s vision of social mobility. The thought is not entirely foreign -- it haunts our economy in the dream of self-employment or workers cooperatives. But mainstream debate has too quickly accepted Jefferson’s theory, the meritocratic ideal, and argued only about how to realize it. By focusing primarily on the means of social mobility we put the cart before the horse. We argue about the social and economic policies that promote equal opportunity before we figure out what kind of opportunities are important in the first place.

A change in perspective forces us to look differently at wealth and income inequality, and social stagnation. If what we care about is economic independence for all, then we have to think not just about the (very important) topic of wage levels, but above all about social power.

Making such power broadly available rests on two key elements. First, individuals have to possess enough material and cultural resources to be secure from potential destitution. And second, they must have opportunities to make decisions about the most important economic and political issues.

So, minimally, expanding the social power of most Americans means investing in programs like universal health care, which secure citizens from the vicissitudes of nature and the market. But it also means going beyond the politics of social welfare in order to ensure that workers have control over their own activities.

Employees must not only be able to provide for their basic necessities, but also to shape the terms of their work. This latter -- equally fundamental -- goal is a major reason why “the primary economic objective of the Democratic Party” for decades was once the commitment to full employment. The purpose behind guaranteeing everyone a job was not simply to provide Americans economic security; it was to elevate the overall bargaining power of employees. In an America wherever everyone could find work, employees would have infinitely more control over the structure and rules of the workplace. The shadow of this idea still lingers in proposals like the Employee Free Choice Act and public works programs.

Ultimately, if the market is doing such a bad job at supplying employment in which most Americans can enjoy real economic independence, then it may well be time to look elsewhere. Progressives have a responsibility to think again and more expansively about ideas like workers’ cooperatives and how to promote broader democratic control over investment (for instance, by restructuring corporate governance). Experimentalism should be the order of the day, not cautious reaffirmation of tired nostrums.

But instead, the consensus, bipartisan framework of social mobility primarily offers a language of elite advancement, rather than a vision for widespread independence and social power.  This means that what makes equal opportunity such a mirage is more than just a failure to institute the right policies or to live up to society’s basic principles. We are facing a failure of principle itself. Recent events give us at least some hope that this failure can also become an opportunity to reimagine what equal freedom means in America.

Aziz Rana teaches law at Cornell University and is the author of "The Two Faces of American Freedom," recently published by Harvard University Press. He writes on American constitutional development, with a particular interest in issues of citizenship, immigration and national security.