When I took the job at the bar, I looked down on it -- and the women who worked there. But I had so much to learn 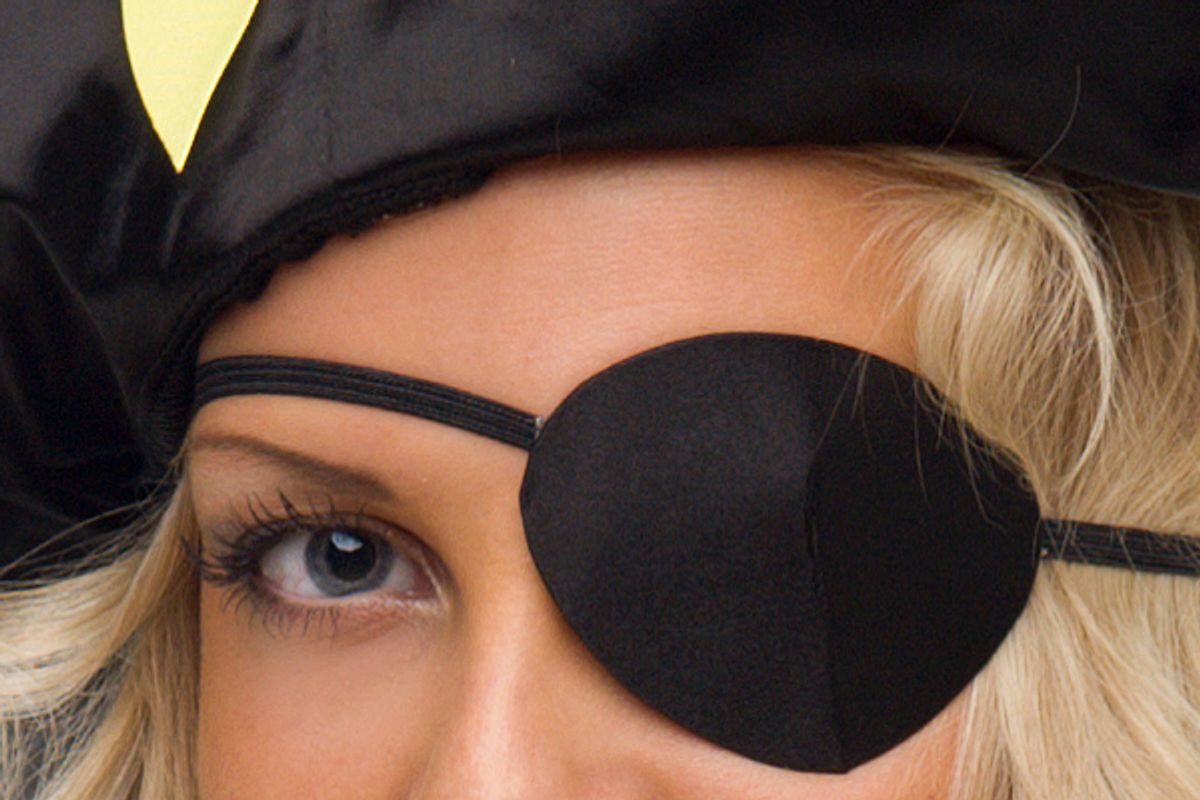 The job description had me at “wear a pirate costume.” A sexy pirate costume, for the very sexy pirate-themed bar on Bleecker Street. The fact that the bar promised hundreds of dollars a night for selling people shots sounded quite all right, too.

I grappled for a few moments over what anyone would find sexy about an eye patch. It implied my eyeball had been gored in a fearsome bayonet fight with a British grenadier. I asked the manager whether I should look for a parrot. She was not charmed.

But by God, I was. I’d grow up on a steady diet of country club sandwiches and tennis lessons, and this was what I came to New York for: to do odd things, and see interesting people. People who went to pirate bars, for fun. I had been a model for art classes, but I had never been a pirate. I kept thinking of the Dorothy Parker poem “Song of Perfect Propriety” where she wrote:

I should like to strut and curse
Among my blackguard crew . . .
But I am writing little verse
As little ladies do

There would be time for a little verse years later, once I doffed my absolutely hilarious eye patch. Before I went in for my first day, I received a list of rules on ways to be a good shot girl. The first was:

So by “pirate” they meant “shiny eyed slattern with a rare gift for healing.” Like Mary Magdalene, maybe. Other tips just made me think that selling shots was going to be a weird, weird job.

Some people have fun eating from their own hands. Do not force feed anyone!

It had not occurred to me that I would deliberately force shots down people’s throats, though, years later, I find it hard to watch any romantic couple feeding one another without thinking, “Some people have fun eating from their own hands!”

But I imagined the women working at the bar would take such a list seriously. After all, women who make a living peddling shots weren’t going to be smart. They wouldn’t see the humor in any of this. I assumed my co-workers would be girls who spoke very, very slowly and thought that Puccini was a type of pasta. To their credit, I also imagined they’d have great hair, and I double-conditioned accordingly.

I was in love with my own incongruity -- being a poetry-spouting college graduate in a pleather miniskirt. And I loved this notion of doing something at which I was entirely unsuited, and which seemed to go so much against my personality. I would never have said it at the time, but I very much believed I was above being a fun-loving pirate wench selling shots. I had read Meno and lived in cardigans and went to museums for fun.

I was a terrific little snob who thought she knew everything, and subsequently, I was about to learn a great deal.

As soon as I started, I realized I had no idea what I was doing. Fortunately, the other cocktail waitresses were quick to make suggestions. My first night on the job, a fellow shot girl offered practical advice. “You have to be a little cold,” she explained. “Make them feel like you’re doing them a favor by letting them buy shots.” But it's difficult to maintain a Queen of Sheba demeanor while trying to rub globs of green glitter out of your eyes. Instead I became a level of friendly you typically only see at Disneyland, if Disneyland reeked of vomit and spilled appletinis. I doled out shots as people in cartoon costumes offer hugs. The manager would point out that I wasn’t being sexy enough, which was surprising, because I was wearing 6-inch heels and less clothing than I ever had.

It quickly became clear that I was not the first literate person to don a miniskirt. Sometime during that first week, I was hiding in the backroom reading Margaret Atwood. I was sitting on the counter next to baskets of party mix because my feet hurt, which they did for the entirety of my shot-selling career. One cocktail waitress swept in, asked what I thought of Atwood's novel "Oryx and Crake," did a tricky little analysis where she compared it to "The Handmaid’s Tale," mentioned some other female dystopian writers I’d never heard of, and then went out balancing a tray of shots on one hand.

As ridiculous as it sounds, that was the first time I became aware that clever people are buried in every nook and cranny of life. It is astonishing that no one pointed this out to me sooner. The girls working at the bar -- they were so bright. Another shot girl had a journal that she filled with poetry that was -- that rarest of all rare things -- crisp and clean and very, very good. This was never a bar where everyone knew your name, but the cocktail waitresses came to know one another’s reading lists, and pitch letters, and audition schedules extremely well.

Of course, we were all there for the money. Shots were sold starting at $3 -- the bar received a dollar, the shot company another one and then one for the girl. But once you realized how comically overpriced $3 is for a shot, it’s just as easy to sell them for $4. A customer once suggested I try selling them for $5 and see what happened.

Taking price variations into account, and often considerable tips, and the fact that if you were good you could expect to sell around 100 shots in a six-hour evening, the money was -- well, it was the kind of money that teachers in America really ought to make. Periodically, I compare how much I made on an hourly basis as a shot girl to what I make at a job that doesn’t require eye glitter and fishnets, and, barring the possibility that there is a job opening for “wildly corrupt dictator,” I think the result will depress me for the rest of my life.

I don’t mean to make the bar sound friendlier or more glamorous than it was. A great many customers were precisely the kind of people that you would expect to find at a pirate bar buying shots at 2 in the morning. Bottoms got grabbed. Bodies got groped. One customer rolled in nearly every night, wearing a pair of Ray Bans. One of the waitresses always served him while loudly humming “I wear my sunglasses at night.” I wondered aloud if he ever noticed that he was being mocked through Corey Hart’s soothing sounds, and the waitress laughed and said, “Oh, I just do it for me.”

And that’s when you realize that everyone -- not just me and my superiority -- knows they’re too good for this sort of job.

One night, an older woman came into the bar. I can’t imagine why; I suspect it wasn't the beer pong. She was one of those very elegant ladies who put their hair up with bobby pins instead of elastic and wore a perfectly cut black dress. I assumed she was lost. She smiled, and gave me $100 and said, “You know, I used to work in a bar when I was younger. It won’t last forever.”

She was right, of course. It’s been years since I’ve been in that bar. But even now I cannot go into a bar or a restaurant without scanning the waitress’ shoes to see if they look comfortable. Every time anyone says something slightly dismissive to a cocktail waitress I am immediately, instinctively on her side, as if we were members of a blood-bonded clan.

I think about that older woman often, usually when I am pinning up my hair. I hope that, like her, I will not forget that strange period in my life, especially as I move past it. I think of the girls in the bar when I am -- as I still am -- too quick to dismiss people. When I am about to write someone off for their choice of eye shadow, I remember that they might be a fellow Atwood reader, and I wonder if she and I are in the same boat. Once in a while they are, and if that makes me feel slightly less special, it also makes the world seem much less lonely.

And in that way, the lady was quite wrong. Those times, and those alliances with a blackguard crew: Thank goodness, they do last forever.

Jennifer Wright is the author of "It Ended Badly: Thirteen of The Worst Break-Ups In History" and the upcoming "Get Well Soon: History's Worst Plagues And The Heroes That Fought Them" (MacMillan). You can follow her on Twitter @JenAshleyWright.