Can Greece thwart a complete meltdown? 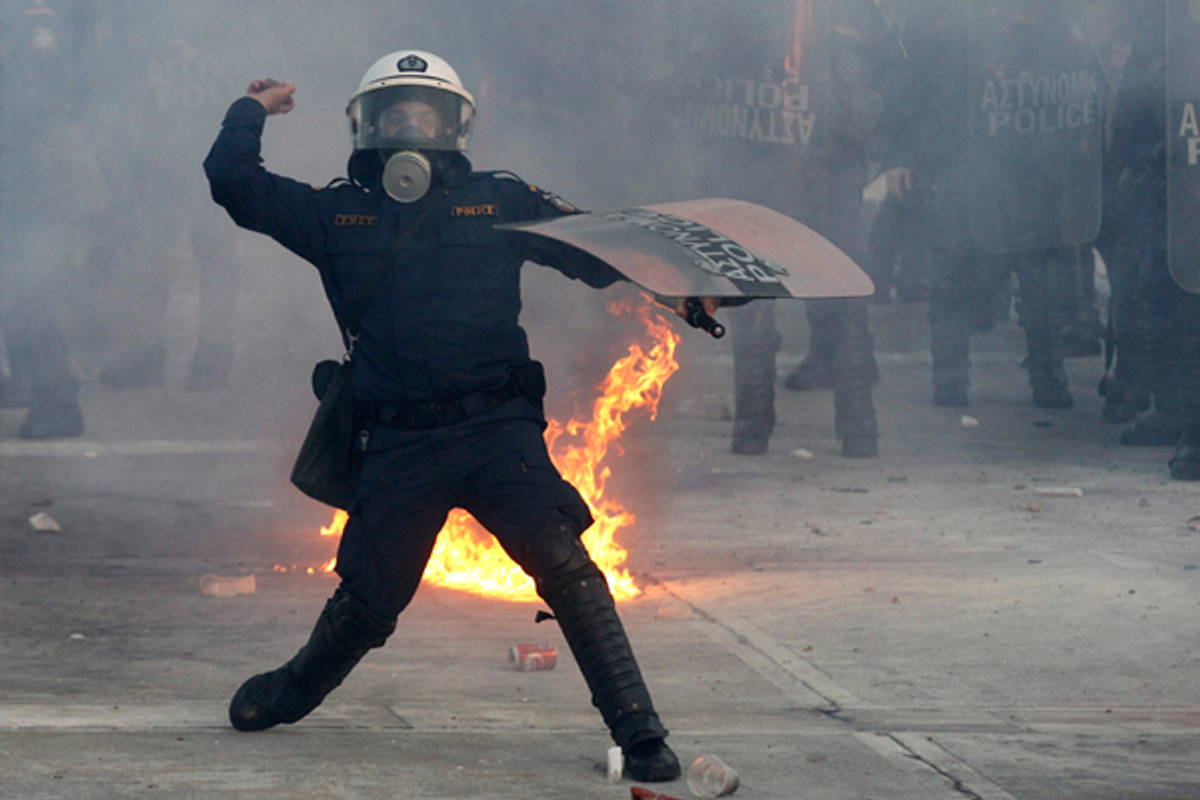 BERLIN, Germany — Amid growing unrest, Greece’s government has finally approved tough austerity measures, yet it is far from certain if the deal will be enough to avert disaster.

As lawmakers in Athens debated a bill Sunday that would impose yet-more severe austerity on the country, outside the parliament building tens of thousands of people gathered to voice their opposition to the deal. Violence flared, as buildings were set on fire, and the police engaged in running battles with rioters.

Around 150 shops were looted and over 40 buildings, including the Attikon, a 19th-century theater-turned cinema, were torched. Unrest also flared in the second largest city of Thessaloniki, and on the islands of Corfu and Crete.

The violence may have been perpetrated by a minority, but there is little doubt that the onslaught of yet more cuts to wages, spending and public jobs is massively unpopular in Greece.

And the crisis is far from over. The Greek government will be under pressure to deliver on the promises it has made to the international troika of lenders — the European Central Bank, European Union and International Monetary Fund — if it is to secure the 130 billion euro ($172 billion) bailout it needs to evade default.

The next hurdle for Greece is the meeting of euro zone finance ministers on Wednesday. The government, headed by Prime Minister Lucas Papademos, will have to convince the Eurogroup that Athens can come up with yet another 325 million euros in budget savings after political leaders refused to cut pensions. The troika is also demanding written commitments from politicians to implement the deal after April elections.

Athens is also expected to inform the euro zone ministers of a planned debt swap deal with private lenders, which should slash 100 billion euros from Greece’s massive debt burden.

Europe’s Economic Affairs Commissioner Olli Rehn welcomed the parliamentary vote as a “crucial step” on Monday, adding that he was confident that the Greeks would identify the concrete measures for the further 325 million in cuts before Wednesday’s meeting.

German Economics Minister Philipp Roesler cautiously welcomed the Greek parliament’s move but made it clear that German approval of the bailout was not inevitable. "Now we need to wait and see what comes after the legislation," Roesler told public broadcaster ARD.

"We have taken one step in the right direction but we are still far from the goal," he said.

Berlin is waiting until the troika release a report on Greece’s debt sustainability before the Bundestag votes on whether to back the bailout on February 27.

Many countries in the euro zone, particularly Germany, are wary of ploughing more money into Greece based on the latest pledges, considering the commitments it made in May 2010 for the first bailout of 110 billion have not been kept.

Greece has struggled to stick to the troika’s targets to cut the deficit while it continues to grapple with the affects of five years of recession.

Now it is being forced to implement even fiercer cuts, which critics say will just push Greece further into a downward spiral. On Sunday the Greek parliament backed the package, including a 22 percent reduction in the minimum wage and 150,000 job cuts in the public sector by 2015.

Despite the refusal of 43 members of the coalition parties to back the deal, the legislation still passed comfortably with 199 votes in favor and 74 against. The two biggest parties – the socialist PASOK, and conservative New Democracy – backed the deal, while the right-wing populist LAOS party refused to do so, and withdrew its support for the technocratic government.

“The full, timely and effective implementation of the program won’t be easy,” Papademos told parliament on Sunday. “We are fully aware that the economic program means short-term sacrifices for the Greek people.”

With a 14.5 billion euro bond repayment due on March 20 the pressure has been on to get a deal in place to avoid a Greek bankruptcy.

However, the austerity measures that are a pre-condition of the bailout money, leave little prospect of Greece returning to a path of growth any time soon.

"Yesterday's vote in the parliament may have saved the country temporarily from default, but the Greek economy is going bankrupt and the country's political system is failing," the head of the Greek Commerce Confederation, Vassilis Korkidis, said in a statement.