How rough it’s gotten for Mitt

When not completely melting down is considered good news, you’ve got a problem 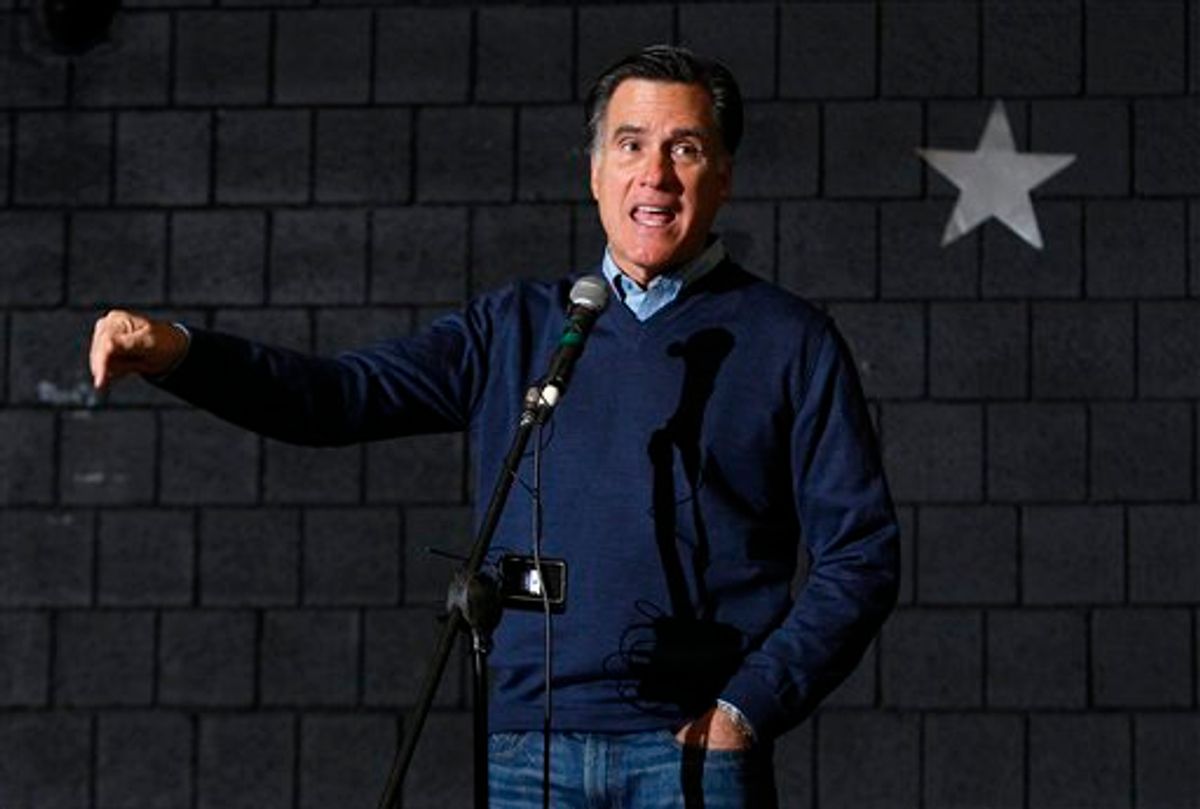 The fact that Mitt Romney scored two straw poll victories over the weekend is not, by itself, bad news for his campaign. But the fact that the entire political world knows he did is.

If things were going the way Romney and his campaign wanted them to be going (and the way they believed they were going until about a week ago), the straw votes at CPAC and in Maine on Saturday would have been campaign footnotes, two more layups for a candidate well on his way to uniting the Republican Party. Instead, they made for headline news, two desperately needed and somewhat surprising victories for a feeble front-runner.

When February started, the assumption was that Romney would win every primary and caucus scheduled for the month, a streak that would lift his standing in national polls to new and previously unimaginable heights and cement his image as the GOP’s inevitable nominee. Romney would then be positioned to finish off Newt Gingrich once and for all on Super Tuesday in early March, at which point it would finally be safe to pivot to the general election.

As expected, the first domino fell in Nevada two Saturdays ago, with Romney posting a lopsided victory, Gingrich barely staving off Ron Paul for second place, and Rick Santorum showing no hint of life. But then, out of nowhere, came Santorum’s stunning sweep last Tuesday – wins with 55 percent in Missouri, 45 percent in Minnesota and 40 percent in Colorado. And just like that, Romney had lost three of the first four February contests and gained a new and potentially more formidable chief rival in Santorum.

That made Saturday an unexpectedly pivotal day for Romney. Before Santorum’s rise from the dead, only two CPAC straw poll outcomes seemed plausible: 1) A Romney victory that would confirm his campaign’s superior organization, its success in marginalizing would-be conservative rivals, and the party base’s readiness to finally look at him and say, “OK, good enough”; or 2) a Paul victory that would be dismissed as meaningless. But when Santorum hit the jackpot last Tuesday and followed it up with a well-received CPAC speech on Friday, he became the favorite to win the straw vote, an outcome that would have accelerated the Mitt-in-free fall narrative.

The same was true in Maine, a state Romney comfortably won in 2008. This time around, he was facing a well-organized challenge from Paul, whose forces hoped to capitalize on the state’s absurdly low caucus turnout to produce an outright victory. But such a result would have been easy for Romney to dismiss as a nuisance – until last Tuesday, when his three-state meltdown turned Maine into a must-win event. Otherwise, the media – and his opponents – would have been able to spend the rest of February pointing out that he was in the midst of a four-contest losing streak. (The next primaries aren’t until Feb. 28, in Arizona and Michigan.)

So Romney dodged two big bullets on Saturday, beating Santorum by 7 points at CPAC and Paul by 3 in Maine. Not surprisingly, there have been cries of malfeasance, with Santorum arguing that Romney rigged the CPAC straw poll by busing in supporters and paying for their tickets, and Paul’s campaign noting that caucuses in a Paul-friendly county in Maine were postponed because of snow that was forecast for Saturday.

“A prediction of 3-4 inches – that turned into nothing more than a dusting - was enough for a local GOP official to postpone the caucuses just so the results wouldn’t be reported tonight,” Paul’s campaign manager wrote in an email to supporters.

The reality, as FHQ’s Josh Putnam explained on Sunday, is that the Maine result is very unlikely to change even when that county (along with two others that also weren’t included in Saturday’s count) holds its caucuses. So a repeat of Iowa, where an apparent Romney victory was reversed weeks later, probably isn’t in the cards. And Santorum’s griping about CPAC doesn’t add up to much; buying up tickets and busing in supporters for straw polls is a common enough practice (though it is noteworthy that Romney's campaign previously downplayed the significance of straw polls).

The bottom line for Romney is that he did what he could do this weekend to keep the meltdown narrative from intensifying. But even as he was winning at CPAC and in Maine, a new national poll from PPP that put him 15 points behind Santorum was released. And on Sunday, PPP teased a forthcoming survey that will likely show Santorum ahead by double-digits in Michigan. So while things could be worse for Romney as this week begins, the rest of February promises to be far more trying for him than it was ever supposed to.