Inside Syria's whirlwind of war

The most complex and dangerous conflict on the planet keeps getting worse. Will the U.S. intervene? 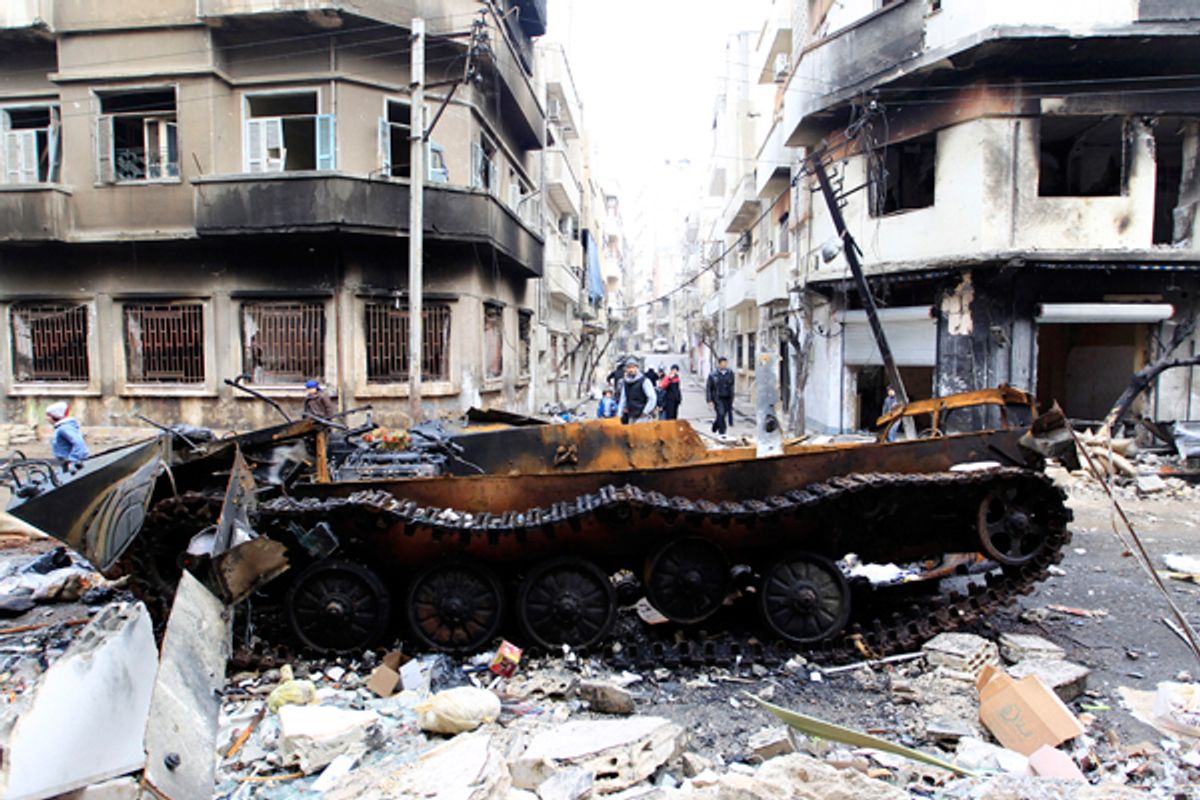 Welcome to a nightmare (Reuters/Ahmed Jadallah)
--

The situation in Syria is deteriorating.

On Sunday, the Arab League announced that it had formally decided to “open channels of communication with the Syrian opposition and offer full political and financial support, urging (the opposition) to unify its ranks” and to “ask the UN Security Council to issue a decision on the formation of a joint UN-Arab peacekeeping force to oversee the implementation of a ceasefire.”

This is the strongest call for foreign military intervention that has yet come from the international community regarding Syria, as more and more Syrians are getting caught up in government crackdowns and increased fighting between the Syrian army and a growing armed opposition movement. Yet questions about the nature and timing of such an intervention are far more complex than in Libya.

As Rania Abouzeid put it simply in Time, “Syria is at war.” A leaked report from the Arab League’s now-defunct fact-finding mission to Syria notes that the situation is rapidly degenerating into a contest between government forces and a growing, determined guerrilla movement (simply called the “armed entity”) that formed due to “excessive use of force by Syrian Government forces, in response to protests that occurred before the deployment of the Mission demanding the fall of the regime.”

“In some zones, this armed entity reacted by attacking Syrian security forces and citizens, causing the Government to respond with further violence,” wrote the observers. “In the end, innocent citizens pay the price for those actions with life and limb."

This is what makes the newest argument for intervention advanced in the United States so troubling. The prospect of heavily armed militias fighting the government (and perhaps each other) is known. But for some U.S. politicians, this is acknowledged and seen as an acceptable risk. Some members of Congress are now advocating arming the anti-regime militias, suggesting that if better equipped, the militias could hold back (perhaps even defeat) Assad’s forces. The U.S., EU, Turkey, Libya and Saudi Arabia are looking for Assad’s departure (Israel’s interests are still unclear), while Russia, Lebanon and Iran appear willing to provide support for Assad. In short, the potential for proxy intervention has definitely increased since the UN failed to pass a resolution against Assad last week.

Joseph Lieberman and John McCain were the first to make such calls, and have been joined by other members of Congress in the past few days. Now a bipartisan group of senators is advancing a resolution calling for “the President to support an effective transition to democracy in Syria by identifying and providing substantial material and technical support, upon request, to Syrian organizations that are representative of the people of Syria.” It does not elaborate on who these groups are, or what constitutes material and technical support, but at the very least, it would mean financial assistance (which the militias could use to purchase arms on the black market) and intelligence dissemination, which would almost certainly result in the dispatch of military observers or advisors.

This approach is a gamble. So too are suggestions for creating no-fly zones over northern Syria, or counting on sanctions and brokerage by the Russian foreign minister to achieve a political solution. Any form of intervention or non-intervention will cost lives – lives that could have been saved, lives that might not have been lost. But of those options, the call to arm militias, or cooperate with them by providing Western funds and intelligence (which would likely be channeled through the Turks and Saudis), is more likely to become a reality since the United States could act without relying on the UN.

If this is just talk meant to encourage the opposition and scare Assad, then it runs the risk of achieving one, but not the other (and of falsely raising the hopes of the groups we’re ostensibly supporting, as happened in Iraq in 1991). If implemented, there are risks that the disbursement of arms will bring stalemate, not solution. Writes Syrian blogger Maysaloon, "we might see a drastic arming of the Free Syrian Army, and an escalation of the conflict to a fully blown civil war. If that happens I wouldn't be surprised in the slightest if the Russians (and Iran) continue to arm Assad to the gills.”

“I don’t think anybody, apart from Assad, would want to see that happen,” Maysaloon believes. “Of course Assad would prefer this solution because it would justify his oppression and use of violence, and also extend the period of his rule.”

The program could actually lead to more direct foreign military intervention. Even should the militias succeed and Assad falls, nothing suggests that all of these now well-armed groups would lay down their arms. And who would secure the Syrian Army’s depots to prevent a militia from grabbing a few truckloads of munitions from an unguarded arms cache, as has happened in post-Saddam Iraq and post-Gadhafi Libya?

Additionally, the Alawites of Syria, as the Economist notes, have their own militias with access to the regime’s weapons stockpiles. Alawites and Christians are overrepresented in the officer corps, so even if many do abandon their posts, they are not likely to abandon their arms – especially given what happened next door in Iraq and Lebanon since the 1980s. They would be loath to do so; and so too would the victors fearful of an insurgency by unrepentant Baathists. It is worth remembering that the first insurgents the US faced in Iraq were ex-Iraqi army guerrilla cells, and soon Sunni and Shia communities were taking advantage of unsecured weapons to arm themselves, both in self-defense and for reasons of revenge.

Whether one supports intervention or not, past experience suggests that an international peacekeeping force would be required to secure these depots, which essentially defeats the purpose of arming the militias as an alternative to direct intervention. Such a force would also be necessary to ensure that the militias – including the pro-Assad ones – are turning in their arms and keeping to cease-fire agreements. Otherwise, Syria might end up in a scenario where many in the officer corps retain their arms, the arms depots are thrown open to everyone, and community self-defense becomes blurred with ethnosectarian revanchism.

And then there is the matter of border control, especially with respect to Lebanon and Turkey, as it’s clear that arms smugglers, refugees and militiamen are already easily moving across these borders. An enclave of militias and refugees has formed on the northern Syria-Lebanon border, and clashes between pro- and anti-Assad militias have reportedly occurred on the Lebanese side of that border.

The armed opposition is gaining, but also losing, ground throughout the country. The government’s brutal crackdowns have produced groups taking up arms to defend themselves, and also to take the fight to Assad. Paul Wood of the BBC says that the country is witnessing “an escalating guerrilla campaign” – one echoing the struggle between the regime and the Muslim Brotherhood between 1976 and 1982 – and that the “Free Syrian Army” (FSA) claims to be planning a “general offensive” in response to the government’s siege of Homs, even though the government is closing its iron ring around the city.

Nic Robertson at CNN reports that in Homs, the epicenter of the opposition, the local opposition council “is not the only show in town. Salafists are moving in too, Islamic radicals ... Reports abound of infighting both inside and outside Syria, the hard-liners already jockeying for post-al-Assad power.” Al Qaeda in Iraq (AQI), now allegedly operating in Syria to provoke further strife between Assad and the Syrian opposition, views Syria as a prize to be won, as do other jihadists throughout the region.

A split remains between the Syrian National Council (SNC), the most visible Syrian opposition group, and the FSA, the umbrella name for the various anti-regime militias that are now active in Syria. And while the SNC is increasingly recognized as the international voice of the opposition, it too has struggled to reach a consensus on foreign military intervention. The SNC is conspicuously absent from a “dialogue” with Assad that the Russians are trying to promote as an alternative to the UN resolutions they’ve vetoed. The SNC says it has been excluded on purpose. The Russian Foreign Ministry, for its part, has shown disdain for the SNC and a clear preference for Assad retaining power.

The Economist presents an overview of the domestic forces still supporting Assad, which shows that for the most part, “support” means acquiescence to his rule out of fear. Syria’s sectarian divides are sharpening in response to such fears of “Sunni triumphalism,” says the Economist – and Assad’s propaganda machine is playing these fault lines up. According to Patrick Seale, many poor Sunni youths were at the forefront of the nonviolent demonstrations that were suppressed. After years of limited opportunities, and in response to the government’s actions, they are now taking up arms against the regime.

As the violence mounts, pent-up grievances are coming to the fore and the unarmed majority is losing patience – but with whom, the government, or the emerging militias? No one can say for sure, or predict how more and more unarmed people in communities targeted by the government for repression (and by the opposition for liberation) will react as the violence continues. The only thing that can be said with certainty is that geopolitical maneuvering is rapidly eliminating any prospect of a “third way” that does not end in a proxy war, or a regional conflagration.